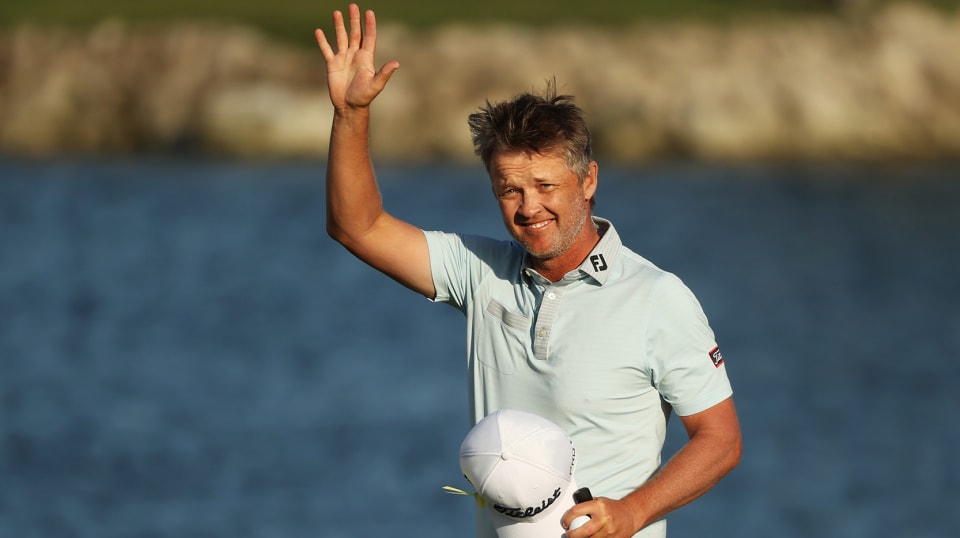 Matt Jones starts the week with a record-tying 61, hovers around par for two days, then holds steady at watery, windy PGA National (Champions Course) for a closing 68 and a five-shot win over Brandon Hagy (66) at The Honda Classic.

It was the second PGA TOUR victory for Jones, 40, sending him to the Masters Tournament next month for just the second time. But it was also a win for Hagy, who began the week as an alternate and enjoyed his best-ever result on his 30th birthday.

Here are five stories you may have missed from The Honda Classic.

After becoming the fourth player in his 40s to win this season – Stewart Cink (Safeway Open), Sergio Garcia (Sanderson Farms Championship), Brian Gay (Bermuda Championship) – Jones was candid about his career. He’d had a solid run at Arizona State, but as a pro had had a sometimes-rocky go of it on the “cut-throat” TOUR.

“I’ve probably underachieved, in my opinion, for what I could have done,” said Jones, a two-time Australian Open winner whose experience in the wind served him well at PGA National. “But I’ve got some time left. I feel like my game’s getting better as I get older. I’m hitting it better, I’m hitting it longer, so there’s nothing to say that that won’t happen.”

Brandon Hagy gave himself an excellent 30th birthday present with a final-round 66 to finish solo second, the culmination of a potentially life-changing week.

Hagy began the week as an alternate, practicing back home in Scottsdale, Arizona, on Monday. When things began to break his way, he got a flight to South Florida at 3:30 p.m. Tuesday. He touched down around midnight, and upon waking up in his hotel room Wednesday morning learned that Kramer Hickok had WD’d – Hagy was in.

And he made the most of it.

His 76-66 weekend and runner-up finish catapulted him 101 spots up the FedExCup standings, from 178th to 77th, making him the biggest mover of the week. It was also a huge boost for a player who has struggled with injuries (wrist, back) and inconsistent play.

“It’s been an interesting couple years,” said Hagy, a 2014 Cal-Berkeley grad (Business Administration). “Obviously, the pandemic, technically I lost my card last year, but still having an opportunity to play out here this year, I was pretty far down the FedExCup coming into this week. But this is a good week for me to set up the rest of the season.”

Denny McCarthy was in the mix at the Arnold Palmer Invitational presented by Mastercard but closed with a 76 to finish T26. He was back in the thick of it for the first half of THE PLAYERS Championship before a 75-75 weekend set him back to a T55 result.

He seemed to be headed down the same road at the Honda, where he stumbled with a third-round 74, but a 67 on Sunday steadied him for a T3 finish, his best result in 91 starts on TOUR.

“It was tough after the past few weeks to kind of pick myself up and come out to this grinder of a golf course,” he said, “but managed to put four good rounds together – really just one little stretch yesterday away from being right in the thick of the golf tournament.”

For McCarthy, who went 4 over on the Bear Trap holes (Nos. 15-17) on Saturday, it was his first ever top-three finish in his 91st start. He moved from 92nd to 68th in the FedExCup.

Phil Mickelson, who has mostly struggled this season but was coming off a T35 finish at THE PLAYERS Championship, saw more positive signs with a T25 at the Honda.

It was the 50-year-old’s best result in 10 TOUR starts this season and included 15 birdies and a final-round eagle at the par-5 third. There were also some gaffes. The watery par-4 11th hole was most problematic as Mickelson triple-bogeyed the hole Friday and doubled it on Sunday.

“I would just say that, look, I made a lot of progress,” he said, “in that there was a lot of difficult shots here with a lot of water and I made a lot of committed swings, and that was a plus. I also made a lot of birdies, and that’s a plus. I obviously had a few, couple of big numbers and I’ll have to clean some things up, but I’m seeing glimpses of playing the way I feel I’m capable of.”

Chase Koepka, 27, carded a final-round 67 to finish T30. His sixth made cut in eight TOUR starts was also the fifth time he’s posted three rounds in the 60s. The local resident has been playing mostly in Europe and was happy to get to perform for friends and family, including his father, who followed him around despite recent open-heart surgery.

Big brother Brooks, the four-time major winner, has been dealing with an injury and didn’t play, but still chimed in on FaceTime with words of encouragement.

“I think takeaways on the week, just needed to drive the ball just a little bit better,” Chase said. “I was just a fraction off. Really other than that, I gained a lot of confidence.”