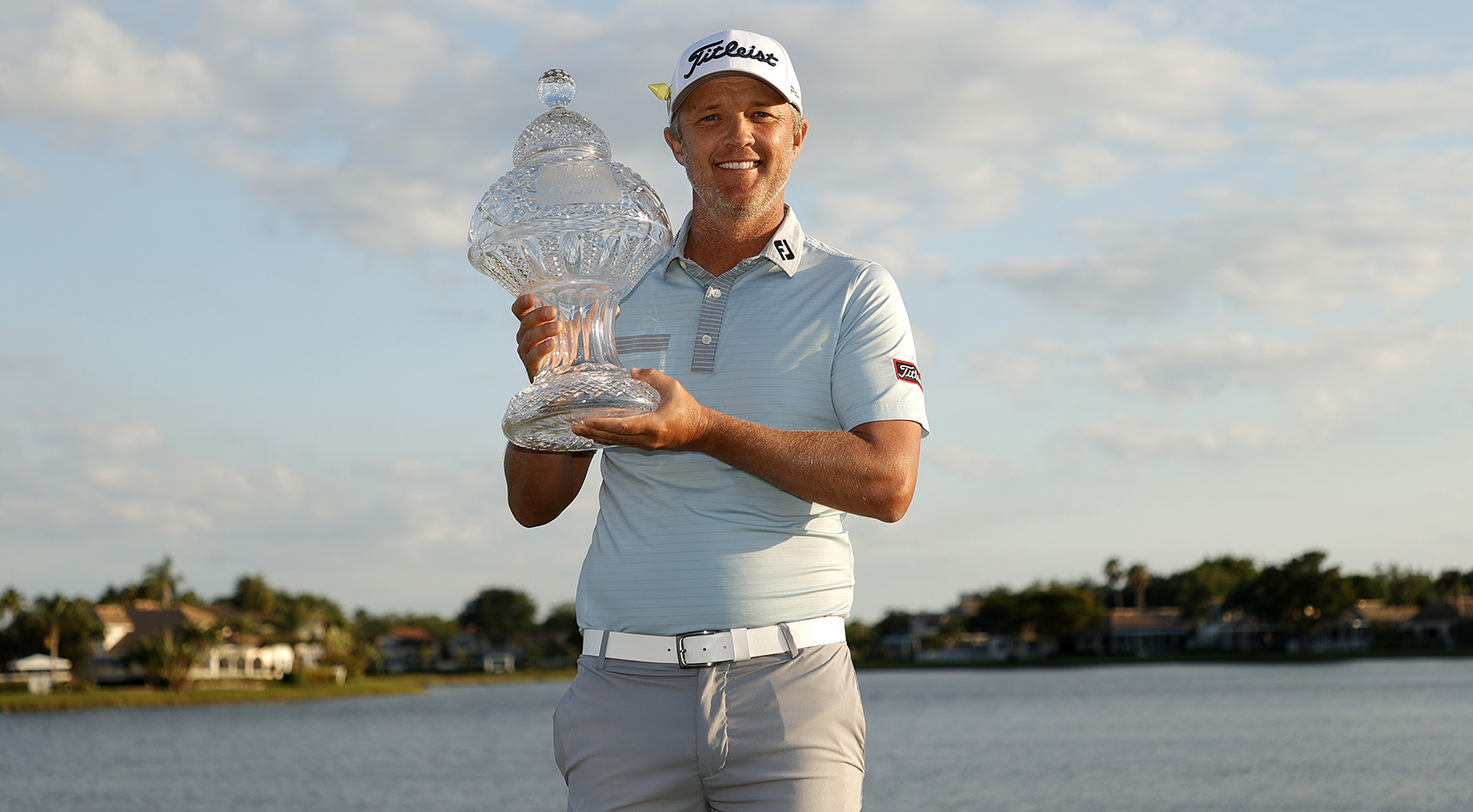 As expected, there were more tumbles, stumbles and complete somersaults on the Sunday leaderboard at The Honda Classic than there were ripples along the waters that guard so many of the holes at PGA National’s often ferocious Champion layout.

Of course, there seemingly is always an outlier in the crowd. This week at Honda, that was Matt Jones. The well-tested veteran from Australia started Sunday on top by three shots and despite all the tumult around him, he never did budge, never did give in. It was as if he took the strongest rope he could find and tethered himself to the largest rock he could find in the nearby Atlantic Ocean.

With the exception of a brief spell on Friday night, the 40-year-old Jones held some sort of ownership of the lead most of the week at Honda. He pretty much just shrugged his shoulders after shooting a record-tying 61 to open, trailed by three on Friday night after his 70, and had the lead again when he went to bed Saturday. By Sunday night, having closed with a technically-sound round of 2-under 68 to push his way to 12-under 268, five shots clear of his nearest pursuer, he’d earned the beautiful crystal trophy he would hold. It had been a while since tasting victory on this side of the pond. Honda was Jones’ second PGA TOUR title, adding to the 2014 Vivint Houston Open, and moves him up to 11th in the FedExCup standings.

Brandon Hagy, an alternate to start the week, battled back after shooting 76 on Saturday to shoot 66 on Sunday and climb all the way into solo second at 7 under. It was a career-best finish for Hagy, arriving on the Californian’s 30th birthday. He finished hours ahead of Jones, who on this week resided in a stratosphere all his own. Jones’ experience in the wind – he owns two Australian Open titles – showed up on the weekend in the way he flighted his golf ball. It also showed in the way he carried himself. It was well, different. In his 330th career TOUR start, he said he felt the calmest he ever has felt. And after one last par putt fell at 18, Jones got emotional.

“I mean, golf … it’s a very tough sport we play out here,” Jones said. “It’s very cutthroat. We’re working to keep our jobs every year. And you have to perform well to be able to do that. It’s been seven years since I won, and there have been some lean years in there.”

When Jones won his first title in Houston seven years ago, he holed a long pitch to prevail in a playoff over Matt Kuchar. He had holed a 45-foot putt at the 72nd hole just to earn his spot. He was catching lightning. This time around, even on one of the TOUR’s most demanding tests, things were much easier. His hair is sprinkled with gray for a reason; his seasoning showed in how he managed a golf course that has potential disaster awaiting at every corner. A day after scrambling to a 1-under 69 in the wind, Jones hit 17 of 18 greens and kept giving himself quality birdie looks. He made easy pars, and five birdies. Nobody matched his total of 20 birdies for the week.

“I’m wondering why this guy isn’t a household name,” said NBC’s Paul Azinger, admiring the ballstriking display he was witnessing. Jones, now an Arizona resident who works via Facetime with coach Gary Barter back in Australia, said he had felt something coming with his ballstriking. It wasn’t too off at Bay Hill, where he missed the cut at the Arnold Palmer Invitational presented by Mastercard two weeks ago. At THE PLAYERS, as he worked on his craft on the practice tee, it clicked.

The man with one victory in 329 career TOUR starts confided to a friend that something very good was about to happen at PGA National. As others around him staggered into doubles and triples and penalty areas on the weekend, how was it that Jones remained so calm? He smiled when asked the question. He really doesn’t know the “why” of it.

Sunday, when Jones made the rare mistake – a three-putt at the seventh, a short miss for par at 11 – he also had an answer. Birdies at the 12th and 13th holes pushed him to a five-shot lead. He treated the ever-lurking Bear Trap (holes 15-17) as if it were a small and harmless cub. Par. Birdie. Par. When his ball he struck with a wedge safely crossed water and hit land on the rugged par-3 17th, he pumped his right fist. Jones really enjoyed the walk up the last. For the second consecutive round he was the lone player in the final six pairings to break 70. All the while, he was so calm.

“I couldn’t put anything on it. I probably had a goal this week to walk a little slower, and just relax,” Jones said. “I’m normally an up-pace, up-tempo person. I play golf quickly. So I tried to stay calm and stay relaxed out there. You have to be when you play this golf course. I set that as a goal this week, and it worked out.”

It did. Jones was going to take three weeks off after Honda, but now he will be getting ready for his second Masters in Augusta, Ga. The only other one he played was a whirlwind, as he’d won in Houston on the Sunday leading into the tournament to become the last man in. The week remains a blur. He’ll take his time and enjoy this visit. There’s also the two-year PGA TOUR exemption, and starts in other big tournaments that he wasn’t able to play as a golfer ranked 83rd in the world. Jones even mentioned the Olympics as a possibility, and maybe even making his first Presidents Cup team.

So many possibilities. Amazing how one week can change a golfer’s life. Over four days at Honda, and after seven lean years, Matt Jones had earned every inch of it.