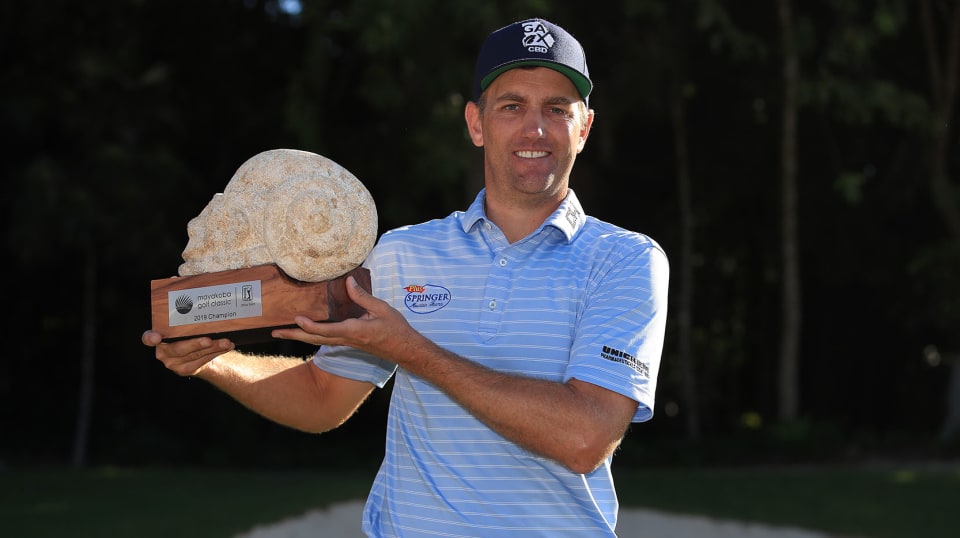 After a week off, the PGA TOUR returns to action for the final event of the calendar year with the Mayakoba Golf Classic presented by UNIFIN.

FIELD NOTES: Andy Ogletree, the low amateur at this year’s Masters, will make his first professional start on a sponsor exemption. Ogletree was a two-time All-American at Georgia Tech, won the 2019 U.S. Amateur at Pinehurst and was a member of the winning U.S. Walker Cup team later that year. He had recently reached No. 4 in the World Amateur Golf Ranking… College stars Quade Cummins (Oklahoma) and Austin Eckroat (Oklahoma State) are also in the field on sponsor exemptions… Thomas makes his first start at Mayakoba since 2014… Koepka returns to Mayakoba for the first time since 2013… After earning Special Temporary Membership, Will Zalatoris will tee it up on the PGA TOUR again. He has made the cut in four of five starts this fall, including three top-10 finishes… Eight past champions are returning to Mayakoba for 2020, including Brian Gay, who has a win already (Bermuda Championship) this fall… Steve Stricker will tee it up on the PGA TOUR for the first time at an event that isn’t a major championship since the Memorial Tournament presented by Nationwide in 2019.

COURSE: El Camaleón GC, 7,039 yards, par 71 (yardage subject to change). The Greg Norman design bends through three landscapes on the Mayan Rivera – mangroves, oceanfront stretches, and tropical jungle. It was the first golf course in Mexico to host the PGA TOUR when the Mayakoba Golf Classic made its debut in 2007, just three years after El Camaleón was opened.

STORYLINES: While there has never been a Mexican winner at Mayakoba things seem to be trending in that direction. Carlos Ortiz finished runner-up a year ago and won the Vivint Houston Open in November. Abraham Ancer, meanwhile, finished T8 last season and was in the final group on Sunday at the Masters… Only once in the tournament’s history has a winner prevailed at Mayakoba by more than two shots, with four editions of the tournament going into playoffs… Ten of the 13 winners at Mayakoba have been in their 30s… Justin Thomas is 10th on the FedExCup standings and looks to make a move before the 2021 portion of the schedule gets underway in January. He is one of two golfers (Ortiz is the other) inside the top 10 of the FedExCup standings teeing it up in Mexico.

LAST TIME: After going five years between TOUR victories, Brendon Todd didn’t have to wait nearly as long for his third victory. In fact, after Todd won the Bermuda Championship in 2019, he won in his next start in Mexico. On the strength of an opening-round 63, Todd finished at 20 under and won by one shot over Adam Long, Vaughn Taylor, and Ortiz. Todd held off a hard-charging Kuchar, who was looking to defend his title from 2018 and who shot a Sunday-best 62 (tied for the low round of the week). Harris English rounded out the top five, while Ortiz’s countryman, Abraham Ancer, notched a top-10 finish.