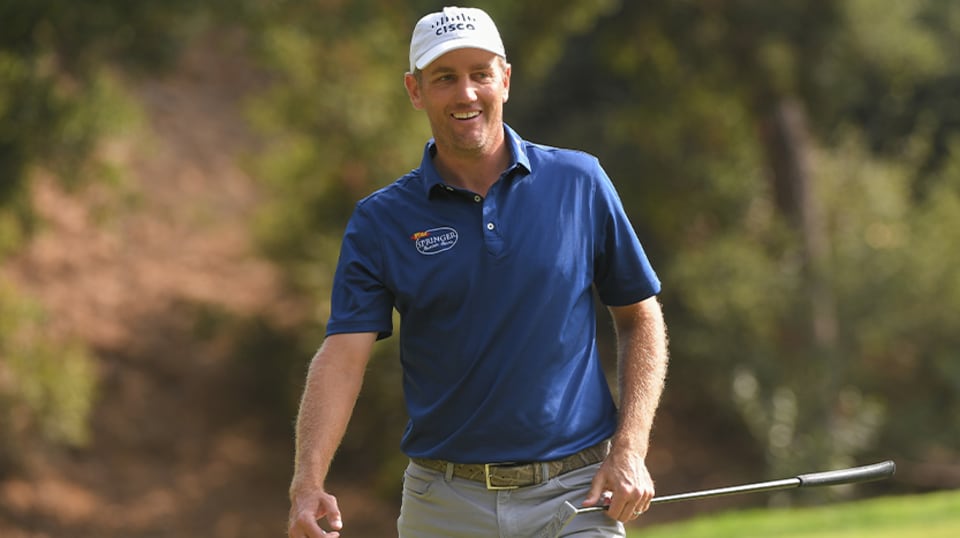 If Segment 1 of PGA TOUR Fantasy Golf has felt like more of a grind than the usual soft open, that’s because that’s exactly what it’s been. Not only are there a record 12 tournaments contributing but the cut at The RSM Classic was a crude reminder to many of its latest iteration (low 65 and ties) now in its second season.

A year ago, I went just 1-for-6 at Sea Island. It was crushing in every sense, but it was a perfect example of why making cuts in this website’s fantasy game is the top priority, and especially in a field with the maximum 156 in play. I managed to get four into the weekend at the RSM this year, but based on the experiences of many who have shared publicly, I was fortunate. A closer look at the cut and those cut helped explain.

Exactly 65 golfers survived the 36-hole cut two weeks ago. Among the 13 who missed it on the number was Justin Rose. He was the sixth-most owned at 34.15 percent. Sungjae Im (second-most), Dylan Frittelli (fifth-most), Sebastián Muñoz (seventh-most) and Louis Oosthuizen (eighth-most) also failed to cash.

This week’s 132-man Mayakoba Golf Classic presented by UNIFIN concludes Segment 1, so play ‘em if you got ‘em. ShotLink is not used, so your only targets are par breakers, low scores and leaderboard finish.

When Brendon Todd prevailed at El Camaleón Golf Club a year ago as a 34-year-old, he brought the average age of the winners down. It was by only 0.07 to 34.85, which slots in the prime of a career, but it’s not often that a course rewards the veteran ball-strikers as much. Seven of the first 12 winners were older at the time of their victories.

The next stop on the schedule is the Sentry Tournament of Champions on Jan. 7-10. Because of the three-month shutdown due to the pandemic last season, this season’s edition of the Sentry TOC will include all 30 golfers who qualified for the TOUR Championship. Of them, 17 didn’t win an event since the 2020 edition, so the preliminary field stands at 45. This week’s champion will be the last to qualify. Thirteen committed at Mayakoba already are eligible to open 2021 at Kapalua.

Because Mayakoba wraps 2020, this is the last Fantasy Insider of the year. It’s why the birthdays at the bottom extend all the way through Monday, Jan. 4. I’ve heard from many full-season gamers who were looking for my annual full-membership fantasy ranking. If you also missed it, the reduction of workable time late in the 2019-20 season and the absence of time in between seasons reduced this year’s edition to a this preview, but I’m always available to review your situation privately. The most efficient connection point is via Twitter’s Direct Messaging.

Thank you as always for your loyalty to our fantasy content and gaming. This gig remains just as much fun and rewarding as it did when I hopped into the seat in 2010. It’s entirely because of you.

Until we meet again, please continue to respect yourself and others as it concerns the pandemic so as to remain healthy and to eliminate disruption in your daily life.

POWER RANKINGS WILD CARD
Pat Perez … The 44-year-old has carved out a reputation as a wizard on paspalum. It’s seriously supported by his experience at Mayakoba where he prevailed in 2016 and finished inside the top 10 in the last two years. Overall, he’s 7-for-8 with five top 20s. However, a recent slide cannot be ruled out as attributable to foot and ankle soreness that plagued him in August. The play is to go for it in a format in which you can be aggressive in places.

DRAWS
Brendon Todd … This is a mild endorsement for the defending champion. He’s been erratic of late and he missed the cut in his title defense on Bermuda, but he remains the product of the formula that’s proven time and again at Mayakoba. En route to a T37 in his last start at Sea Island, he led the field in fairways hit, but he ranked T53 in greens in regulation despite averaging 12.75 per round. That’s enough to retain our confidence, but his sticker price in DFS likely squeezes him out of cost-effective decisions.

Russell Henley … Ten consecutive cuts made upon arrival and one of the best tee to green this season. Quite simply, he’s done nothing in recent memory to suggest that his next slump is looming.

Joaquin Niemann … He’s likely over the frustration not to have been able to compete in the Masters due to COVID-19, and he finished T44 at Sea Island the following week, so all systems are go again. This is his third start at Mayakoba where he’s hung up three red numbers in six rounds but didn’t come close to contending in his debut in 2018 (T60).

Chez Reavie … Now 39 years of age, it’d surprise no one if he’s posing for pictures with the chameleon trophy this week. Perfect in seven trips with a T4 (2016), a T14 (2017) and T26s in the last two editions, his combination of accuracy off the tee and precision on approach is repeatable and sustainable. While that’s an obvious analysis, he’s well-documented as streaky throughout his career, so even though he’s been quiet since a T3 at the Safeway Open to launch into 2020-21, Mayakoba is on the short list of tests that can spark his next surge.

Adam Long … In full disclosure, he’s among my favorites, both in fantasy and reality. Now in his third season, he’s continued to maintain a pace of cracking the top 25 in half of his cuts made. It means that he’s unafraid of getting in the mix on the weekend. He’s also missed only one cut in his last 12 starts, nine of which had a cut. The 33-year-old is balanced throughout his bag, but he sets up his consistency with an exceptional game off the tee. In last year’s debut at Mayakoba when he arrived in similar form to his current, he shared runner-up honors.

Camilo Villegas … Fresh off an emotional and inspiring T6 at Sea Island, he returns to Mayakoba for the first time in three years. He missed just one cut in five consecutive trips.

FADES
Rickie Fowler … Aside from his current position as the poster boy of those clinging to a spot inside the top 50 of the Official World Golf Ranking to gain entry into the 2021 Masters, that fact is reason enough to hold your breath. He’s finished second (2017) and T15 (2018) at Mayakoba, but 2020 has been an experience in connecting with swing changes that haven’t translated into a top 10 post-hiatus and a top 25 in his last seven starts. Trap.

Marc Leishman … If I made space for another Wild Card, he’d have filled it. He’s rested since a T13 at the Masters where he ranked T4 in greens hit and led the field in par-5 scoring. Because he’s played well there before and due to the insular environment on the whole, it could be an anomaly but it’s still representative that his game isn’t as far off as it was in every other start since play resumed. Making his first appearance at Mayakoba in four years, so treat it as a bonus if you own him in a full-season format; otherwise, be careful.

Charley Hoffman … In what has been an effective 2020, he’s scattered six top-15 finishes, including a pair this season, but the 2014 Mayakoba champ is 0-for-5 and hasn’t broken 70 here since.

Gary Woodland … Runner-up here in 2016 and he’s 4-for-4 since 2009, so he loves the place, but it’s still a curious decision to give it a go given the torn labrum in his hip and subsequent discomfort in his back.

Kyle Stanley … His T6 at Sea Island was a personal best in six appearances, all of which resulting in a payday, but it’s time to abstain if you remain in the same lane. Just 2-for-6 at Mayakoba with missed cut in his last three tries.

Brian Harman … It’s relative in the context that if you’re looking only for a cut made, fine. He’s 4-for-4 at Mayakoba since 2015. However, the best of the bunch was a T40 to spark that streak. Prior to missing the cut at Sea Island where he’s played much better over time – it’s not surprising given that he’s a local – he strung together nine top 40s dating back to the Wyndham Championship.

Byeong Hun An … Off to a rough start with four missed cuts sandwiching guaranteed paydays at Shadow Creek (T42) and Sherwood (T35). Missed the cut in only prior trip to Mayakoba in 2017.

Andy Ogletree … This is just a courtesy reminder to keep an eye on him. The 2019 U.S. Amateur champion is making his professional debut at Mayakoba. In his last start, he captured the Silver Cup as the low amateur at the Masters (T34).

RETURNING TO COMPETITION
Henrik Norlander … Untimely contraction of COVID-19 led to his early withdrawal at Sea Island, but the positive spin is that he missed only one the one tournament since the PGA TOUR was dark for Thanksgiving. While he’s no doubt eager to pierce the turf again, and while his profile as a ball-striker fits Mayakoba well, invest fractionally at most in DFS. This is his third appearance, so he knows the property.

Michael Kim … Walked off Seaside during his first round of The RSM Classic with a sore back. Same thing happened during his opener at the Barracuda Championship four months ago. It’s been 26 months since he’s cashed in a tournament with a cut.

NOTABLE WDs
Cameron Tringale … Opted to begin his holiday break follwoing the solo third at Sea Island instead of another week on the road. He’s connected for only one top-45 finish at Mayakoba, anyway, that a T25 in 2017. Currently 33rd in the FedExCup.

Matt Jones … Since 2013, the Aussie made the cut in all four trips to Mayakoba but none yielded a top 30. Currently 59th in the FedExCup thanks in part to a T14 at Corales and a T4 on Bermuda.

Brandt Snedeker … He hadn’t appeared at El Camaleón since the inaugural edition in 2007, so his commitment was curious in the first place. Sits 121st in the FedExCup with one top 40 (T17, Sanderson Farms) among four cuts made in seven starts. Gamers never have worried about him, but he’s not yet fully exempt for next season and he’ll turn 40 next Tuesday (see Birthdays below).

Danny Lee … Since his unfortunate experience at the U.S. Open, he’s 2-for-4 with a T21 at Shadow Creek, but it’s one of only two top 25s since play resumed in June. He figured to log one more at Mayakoba where he’s recorded a pair of podium finishes and a T25 since 2014, but it’ll have to wait. Led outright here last year with a course record-tying 62 in the first round before fading to finish T26.

Martin Trainer … Also withdrew early from the Bermuda Championship but he missed both cuts since. In fact, he’s missed 15 in a row dating back to February and he’s cashed only once in an event with a cut in almost 20 months.