ORLANDO, Fla. – Who wore it better?

“Arnie, definitely,” said Rory McIlroy, who showed up at Bay Hill Club and Lodge on Thursday dressed in a navy polo with Arnold Palmer’s iconic umbrella logo, cream-colored pants and belt, and custom Arnold Palmer-themed Nike golf shoes. It was a tribute to one of Palmer’s most memorable photos.

“That picture of him in the navy top and these colored pants is a very iconic photo,” McIlroy said, “so just trying to sort of emulate that a bit.”

McIlroy is also hoping to copy his winning performance from a year ago at the Arnold Palmer Invitational, though his title defense didn’t get off to a roaring start. McIlroy struggled mightily with his ballstriking and opened with an even-par 72, his worst API round since an opening-round 74 in 2017. (He finished T-4 that year.)

The world No. 6 entered this week leading the Tour in strokes gained: tee-to-green. He was a shell of that on Thursday. He led the field in driving distance but hit just seven fairways and ranked 60th in strokes gained: off-the-tee. He was in the negative approaching the green, standing 76th in that category.

“I hit some wayward ones,” said McIlroy, who made four bogeys, including at the par-4 15th, where he hit his drive under a tree and had to take a penalty drop.

Luckily for McIlroy, he was able to limit the damage on No. 15 with an impressive bunker shot to tap-in range. His short-game statistics weren’t stellar, either, but overall McIlroy seemed content with his ability to grind out a solid score. He birdied two of his final three holes and missed a 22-footer for birdie on the par-4 18th hole that horseshoed out.

“Look, it’s nice to have all aspects, even if you’re off with your driving or iron play,” McIlroy said. “I scrambled pretty well for the most part today and I holed a couple of good putts when I needed to, so I kept it together.

“It could have been worse, (but) even par isn’t too bad.”

As for the putter flip on the final hole, McIlroy failed to stick the dismount, and instead his flatstick crashed into the putting surface. If Arnie liked McIlroy’s outfit, he probably would’ve rated McIlroy’s fumble well below that.

“If he was here I would have told him I’m sorry I put a little dent in his 18th green,” McIlroy said.

McIlroy immediately repaired his accidental damage. Now, seven shots off of the lead after 18 holes, he’ll look to dig himself out of an early hole at Bay Hill. 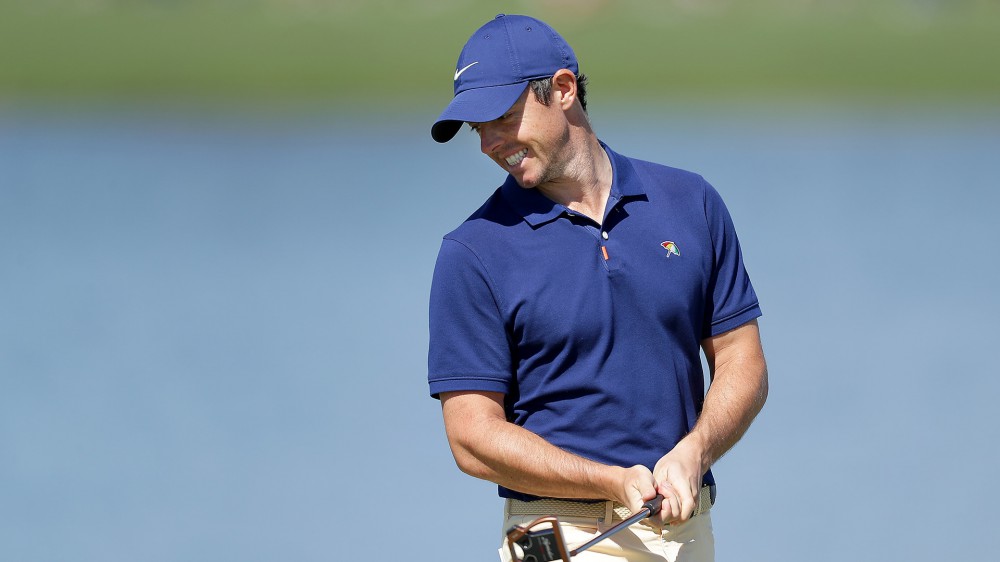