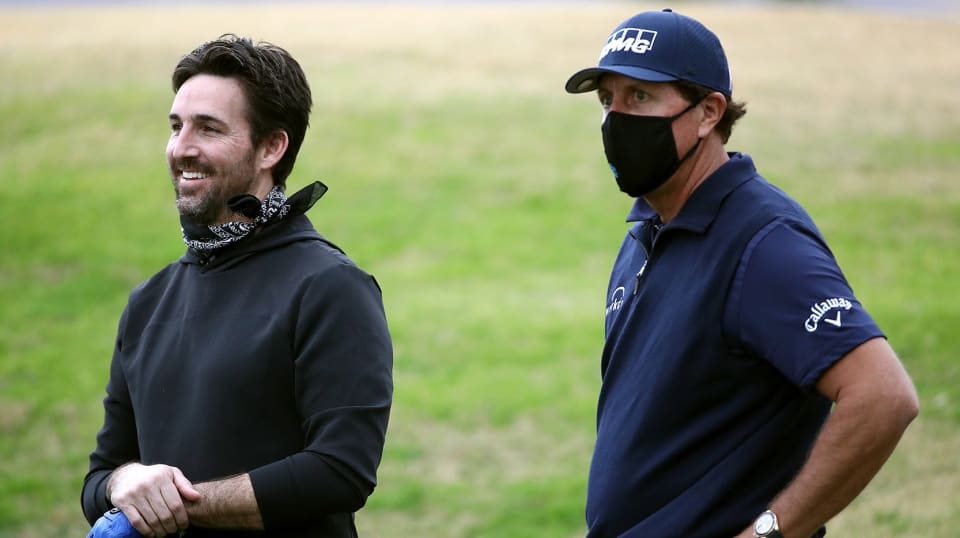 The host was brought into Wednesday’s action with two driving
contests, both against Finau, a closest-to-the-pin contest (Casey), and a
short-game contest (Casey) – all for the two teams’ chosen charities.
He did not win any of them. He was admittedly stiff, and also was hooked
up to wires, wearing a mask, and admitted Finau is untouchable with the
driver, anyway.

“Ten years ago, I was at the Callaway test
center,” Mickelson said as he kept things moving along, “and you and
your brother Gipper were there, and you were hitting nasty bombs there,
and you broke the golf ball. You broke it. Literally broke it. It
had a 212 mph threshold. I’ve never done – that unless I bladed it,
like a wedge or something.”

At the PGA Championship at TPC Harding
Park last August, Mickelson spent more than an hour in the CBS booth
with Nick Faldo and Jim Nantz. He exchanged zingers with Faldo while the
veteran Nantz kept everything running smoothly. But for the Charity
Challenge, which aired on Golf Channel and PGA TOUR LIVE, Mickelson had
to work mostly solo.

At the 14th hole, when asked why he wasn’t
giving even more advice to amateurs Donovan and Owen, Mickelson said, “I
mean it’s a little difficult because when you see the skill level with
the wedge of Landon, the beautiful one he hit on 10, the horrific one he
hit on 13, you really don’t know where to go with it. Oh, you heard
that, Landon? My bad.”

At the 15th hole, Owen said he’d been
drinking more coffee lately, which naturally was followed by Mickelson
recommending his specially blended Coffee for Wellness.

Donovan, newer to the game, was sketchy on the Rules and kept asking when to concede a putt.

“You’d
still watch it,” Mickelson said of Casey’s upcoming short birdie putt
at the 15th hole, “but 98.7 percent of the time he’s going to make that.
You’re nice and classy, so I know you want to give it. I want to watch
it.” (Casey made it.)

Mickelson razzed Donovan for hitting his tee
shot in the water at the island par-3 17th hole (Alcatraz), but then
seemed to remember how many thousands of balls are drowned there.