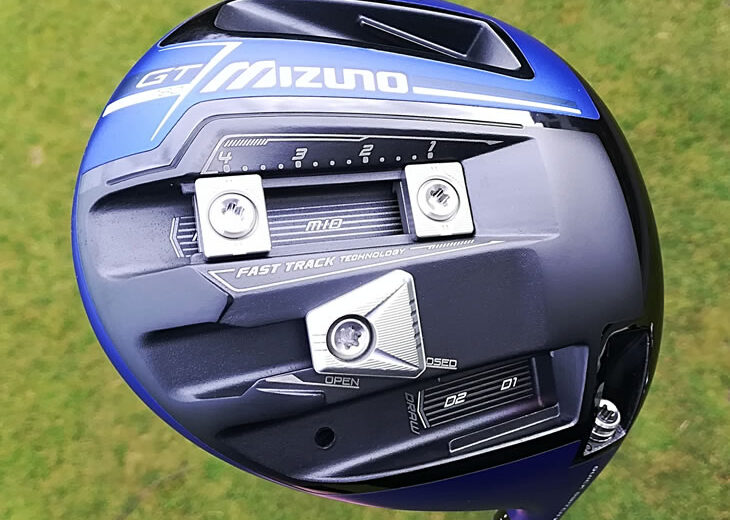 Mizuno GT180 Driver Review – The Mizuno GT180 driver is the third generation to feature the Fast Track system with weights that can be removed and inserted in a vareity of different channels and positions. 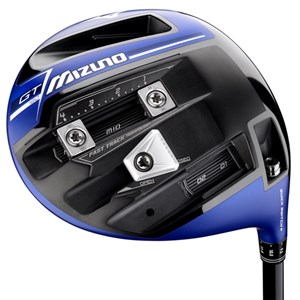 The long single central track of the previous JPX900 driver is retained, but now it comes with two fade and draw tracks in the heel and toe that are longer than before.

However what you gain in a 1cm longer heel/toe track you lose in a 1.5cm shorter central track and the weights are 1g lighter at 7g each, so you have 14g to move around instead of 16g.

The face angle track with its larger weight to help align the face when you put it down at address is also about 1cm shorter and despite the chunky look of the ‘weight’, it does a good job of changing the face angle as you change the loft and lie using the adjustable hosel.

This of course only works if you ground the club and then take your grip, but it is still one of the best systems for solving the face angle issue.

The head uses the same Waffle Crown design that saves weight to move it lower in the sole to keep the CG point down.

Whilst the first two digits of the name stand for the year of issue with a zero on the end, the GT in the name stands for Gravity Tech and it is really this moveable weight feature that is the raison d’etre for the GT180.

Taking the GT180 on GC2 with Titleist Pro V1x balls gave some interesting results as you changed the weights and the lofts.

With the weights in ‘standard’ positions of 1 and 4 the GT180 gave pretty good numbers for me. Moving the weights further back to positions 3 & 4 in order to get more launch actually added spin and cost a few yards.

Optimising the driver to get more launch with less spin, I added a degree of loft to 10.5° to increase launch and then put the weights in the D1 draw and F1 fade positions to get them as far forward as possible to lower spin and as far apart to help with the MOI.

As I was adding loft it closed the face so I put the face angle lump in Open position and it sat lovely and square. This set up managed to drop the spin back down, but only to where I was in the standard setting.

Moving the heel weight to the toe dropped the spin even further and increased the launch so that was probably the optimum setting for me.

As you can see there may be multiple ways of achieving the same results and it is going to take some trial and error to get it right as the balance and feel of the club will change as you move things around and also how it looks at address.

In addition you will also have to take into account the shaft which is a Mitsubishi Tensei as standard, but there are numerous options available through Mizuno custom fitting, so like the ST180 driver, another shaft may yield better results.

So is this adjustabillity all worth it? Comparing this optimum setting to those of the ST180 and JPX900, I was getting better launch conditions and therefore more distance with both. Like the ST180 driver review, the JPX900 was not out gunned.

It almost seems that by creating two drivers from one and ensuring there is enough difference between them, that the magic of JPX900 has had to be split and one or both of the 180 drivers has suffered, so if you want an adjustable driver and already have a JPX900 then you may want to stick rather than twist unless the launch monitor says otherwise.

The ST180 is more point and shoot and at £50/$100 less means that there would need to be a big performance gain to justify going for the GT180. However whilst it may not be a large sector of the market, I could see the GT180 suiting certain players who need to add or vary spin and don’t need as much forgiveness.