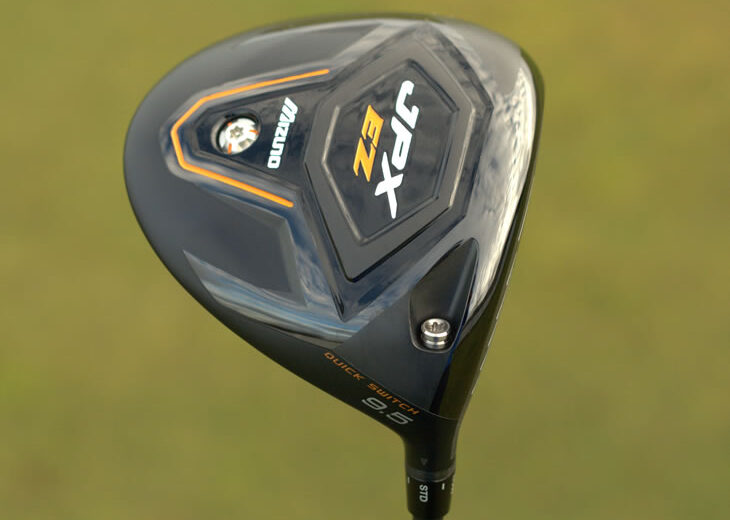 Mizuno JPX EZ 2014 Driver Review – The goal for almost all manufacturers is to make clubs that make golf easy. It’s a hard task, but they spend a lot money and research trying to make the game simpler for everyday golfers. Mizuno have taken that challenge quite literally, in naming their latest wood the JPX EZ driver.

The JPX EZ is Mizuno’s first ever adjustable-loft driver and brings a new look, new colours and a new headshape. 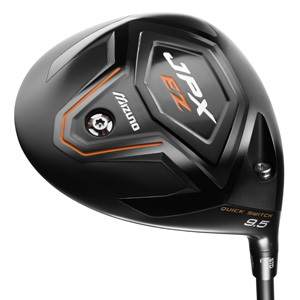 Whilst the new head size and shape may appear very large, it is actually a little less than 460cc. Whilst most companies push size and distance to the max, Mizuno believe in a slightly different approach as R&D Manager, David Llewellyn told us:

The difference between 450cc and 460cc seemed negligible once we found a head size and shape that provided the mass properties, sound and look we were after. It is our general feeling that 460 is just a “number” and there is no need to chase it if we can achieve our design goals at a slightly smaller volume.

450cc is not new however as the previous JPX 825 driver was also 450cc. However size may be the only thing these two drivers have in common.

For years Mizuno fans have become used to the black and dark-blue colour of Mizuno’s clubs, but the JPX EZ features a fresh new orange colour. It seems to be a popular colour in golf at the moment, but may disappoint some Mizuno loyalists.

At address, there is no colour on view. Mizuno have created a matt black crown with a simple, understated ‘Mizuno Runbird’ alignment aid. Whilst it is the same volume as the JPX 825, the JPX EZ looked larger and more rounded at address than its predecessor.

I really liked the new look at address. The matt black finish made it easy to align without any issues with glare and the alignment aid gave the driver a classy, premium look behind the ball.

Another tweak Mizuno made to the shape of the head involves the way the crown meets and blends with the clubface. Mizuno wanted to make the JPX EZ faster and more forgiving, so added more bevelling to the top of the face to create a new Rebound Crown as Club Engineer, Chris Voshall explained

The key on the rebound crown is expanding the effective trampoline area to go beyond just the boundaries of the face. This allows the for better ball speeds across a wider area, with the main focus being on high impacts on the face where the club produced the highest launch angles and lowest spins.

Typically it is better players that strike their driver high on the face, which can create a long, low-spinning flight. You may wonder why a JPX driver, traditionally designed for mid to high handicappers, is tailoring its performance to better players. However, I can tell you that this driver will suit a wide range of skill levels and I have even spoken to Tour players who have added this driver to their bag and are loving the new performance and looks.

One issue we had with the JPX EZ however, was the sound.

Traditionally Mizuno have been known for producing clubs that offer excellent sound and feel. They use carefully designed ‘sound tuning fins’ inside the driver to alter the acoustics. Unfortunately we felt the loud, high-pitched noise of the JPX EZ slightly overshadowed the looks and performance.

To investigate the sound we spoke to Mizuno’s Club Engineer, Chris Voshall, who explained:

The JPX is a slightly larger footprint, more forgiving design so the sound needs to match up accordingly. Additionally, sound is very key to the perception of distance so we are really focused on created drivers with not only hot, but hot and solid sounds.

I can appreciate what Chris says, but would simply recommend you test it out for yourself to see whether you are comfortable with the noise.

As far as the performance of the club after the impact, it was impressive and you can certainly appreciate the forgiveness the size and design offers. As it should, it got the ball in the air early, that is typical with JPX ranges.

The JPX EZ felt harder and stronger than the JPX 825 driver. Whilst I didn’t experience a huge difference in distance, if you enjoy a stronger, hard feel at impact, you will like what Mizuno have done.

As I said earlier, this is Mizuno’s first adjustable-loft driver, so for the first time ever, we were able to remove the head of a Mizuno driver and tweak with the ball flight. Off-the-shelf this is a mid-to-high launching driver, but with the adjustability and shaft options, better players could lower the spin.

Mizuno told us they have waited on adjustability because “we wanted to make sure we were doing it right”. Their Quick Switch adjustability works much like the adjustability in other drivers on the market. Using the wrench, you unscrew the shaft from the sole of the driver and remove the head.

Whilst the loft is indicated by the markings on the end of the hosel, the lie adjustments are written on the sleeve. It was a little confusing at first, but soon made sense.

As you see here, there are four indicated settings ranging from +1.5° to -1.5° of loft, whilst the lie angle changes from standard to 2° upright. Each of these four labelled settings has a setting in between, offering a total of 8 settings, but you cannot adjust loft and lie independently.

If that still doesn’t make sense, this graphic from Mizuno certainly helped us when we were testing.

Often driver adjustments promise a lot but in the end offer only minor changes in flight, designed more for tweaking a player’s shape rather than changing it. However, I was impressed Mizuno’s first venture into loft adjustability. With the 9.5° head I tested, changing the loft by plus or minus 1.5° made a noticeable difference, not just in height but also in spin.

Having played around with the settings quite a lot, I settled on 0.75° more loft and 0.5° upright. When set there, I was able to get plenty of height without feeling I was compromising on spin or roll-out.

Having seen photos of the JPX EZ, you may be wondering if the weight screw in the back of the sole is adjustable. I can tell you, for now, it is not. Mizuno told me they may adjust this weight in their custom fitting service, but it is not an alteration available to consumers.

In our tests, the shaft felt good. It wasn’t as hard as the sound of the clubface, but offered a stable, consistent performance throughout the testing.

Overall, I was left impressed by the JPX EZ. The larger footprint, the matt black finish, the minor shape changes all looked great and sat impressively behind the ball. The performance was good, but not noticeably longer than the previous JPX 825 version.

The main selling point should be the adjustability. For a first generation adjustable-loft driver, Mizuno have designed a worthy model that players will benefit from. It is worth the time spent adjusting the loft and lie to get it set-up right for you.

I could see anyone from a long-hitting Tour player to a 25-handicapper enjoying this driver. It comes in at a mid-price point and offers great value so if the sound isn’t an issue, you will no doubt enjoy the forgiveness and adjustability that the JPX EZ driver offers.