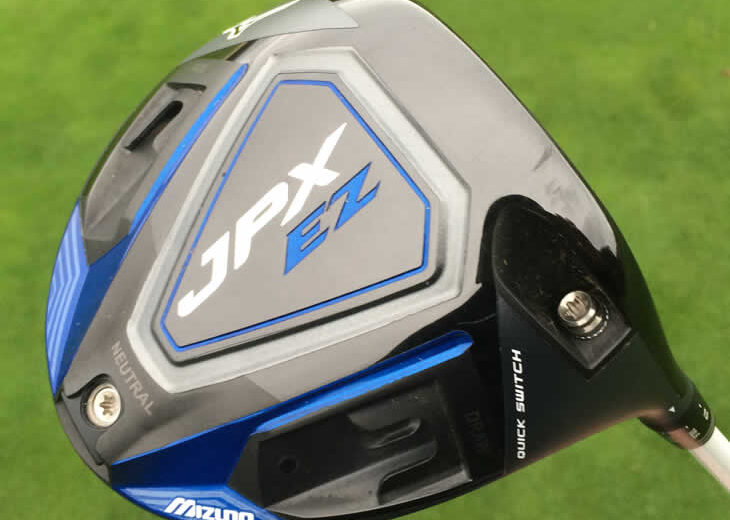 Mizuno JPX EZ 2016 Driver Review – The 2016 version of the Mizuno JPX EZ driver is a meaningful upgrade from the black and orange 2014 version. 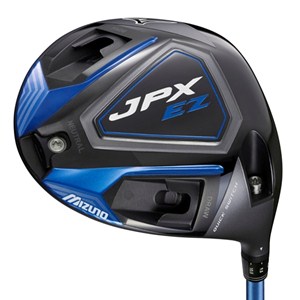 The most noticeable change is the silver crown that contrasts with the darker face to help give a little bit of alignment help at address.

The 2016 EZ head is not only 10cc larger at the full 460cc volume, but it is also deeper and shallower than the previous EZ driver.

This gives it a real presence at address and inspires you with every confidence that good things are about to happen.

Like the old EZ, the 2016 model also has an adjustable hosel that is now numbered with 5 lofts from 8.5° to 12.5° in 1° increments instead of the previous and more cryptic High and Low markings.

This means that instead of 3 initial head lofts there is now just one at 10.5° that you adjust using the Quick Switch hosel to any of the 5 lofts or one of the 3 upright lie lofts. This seems a lot clearer than before and offers a good array of options.

What is new on the 2016 EZ driver is the introduction of a moveable 10g sole weight that can be inserted in a slot at the back, toe or heel of the head.

This is very similar to the system in the Mizuno JPX 850 driver except that there is only one option in the neutral centre position for the slightly heavier weight.

Moving the weight to the heel did promote a slight draw and vice versa for the toe and in the back it adds a little extra back spin for a higher flight.

Depending on how much of a slicer you are, the back setting will probably do most golfers as the head is a little closed at address already, but it is nice to have the option and it is simple to understand and move the weight using the supplied wrench.

It comes with the same 60g Fujikura Orochi shaft as the JPX850, but it is 0.5 inches longer as standard at 45.5 inches. It is a good shaft and maybe a little on the firm side, but there are many custom options available if you prefer something else.

I compared all three models on Trackman set at 10.5° and the 2016 EZ driver not only sounded and looked better than the 2014 version, but also carried about 6 yards further on a 100mph swing. It had around 100rpm less spin for me with a higher launch, which is to be expected from that deeper head.

Therefore compared to the previous model, it is a big improvement. Compared to the JPX850 then the performance picture was less clear as for me the smaller headed club did deliver a little more distance. Sometimes that happens when you compare a smaller head with a larger one as usually they move through the air quicker, thus giving more ball speed and more distance.

However it is a 440cc head in a more compact style so it looks much smaller and with a deep blue crown, there are several differences that could swing your decision one way or the other.

Not only is there the look and performance, but also the forgiveness as the larger head of the JPX EZ did give the reassurance that comes from a deeper shallow head with the CG further back.

If you are a higher speed swinger than me, then the JPX850 would probably be the better choice, whereas mid to high handicappers should probably lean towards the JPX EZ. That does not rule out better players as even Luke Donald is using the JPX EZ driver as I write this.

Really the difference between the two models is the spin and forgiveness profile as they are priced the same, so you don’t get a financial penalty for being more suited to one driver over the other, which is good to see.

Overall I do like the JPX EZ 2016 driver and it is probably the best large JPX driver Mizuno has done and it looks the part, certainly in the silver and blue of the men’s version. Ladies, let me know what you think of the lighter weight silver and yellow option for you.

Given the performance is similar to the JPX850 and generally in the pack of current drivers then it seems fair to give the JPX EZ the same rating. However like it’s sibling club, this is another step forward for Mizuno in this market and if you like their style, then it is worth trying.