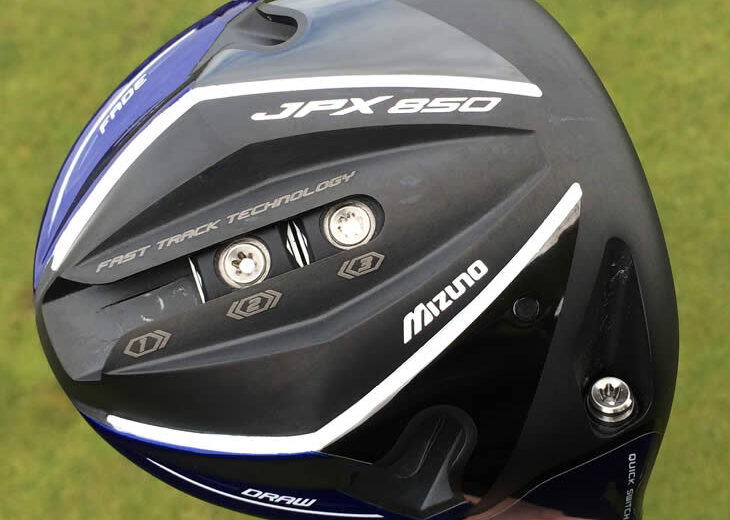 Mizuno JPX850 Driver Review – When the rules were changed to allow adjustability in golf clubs, everyone went off to come up with their own version of what this meant. Mizuno’s take on this was to introduce the Fast Track in the 2007 MP-600 driver to allow weights to slide along a channel to alter the shot shape.

Since then the Fast Track has come and gone a few times, regenerating like Dr Who in a different form, such as the longer version on the 2010 MP-630 driver. Now thanks to a Japanese sonic screwdriver we have the latest version in the Mizuno JPX850 driver. 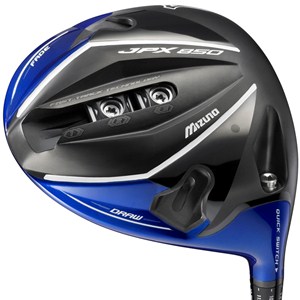 Where previous versions had the weights sliding around the perimeter of the sole, the JPX850 Fast Track focuses weight right down the middle to enable you to move the Centre of Gravity (CG) backwards and forwards. This in turn affects the level of spin put on the ball, with less spin when more weight is forward towards the face and more spin when it is moved to the back.

The Fast Track is very easy to understand, as there are two 8 gram weights that you unscrew to slide across three positions numbered 1 to 3.

Like the Tardis there is more space for adjustability than it first appears on the JPX850 as there are further weight slots in the heel and toe side of the sole. Removing one or both of the weights from the centre and placing them in these slots will change the shape of the shot left or right. Put them both in the outside settings and you will maximise the MOI or forgiveness of the club.

So does it work? Well, yes it does, but it is quite subtle about it.

In the central Fast Track, moving both the weights to the back positions effectively moves 8 grams 4cm, which is quite a large range of movement. As I write this, only the Nike Vapor Flex driver has a greater movement front to back down the centre of the club.

This did vary the the amount of spin and change the trajectory vertically and the key will be to balance this with the loft of the club, which I will come on to later. Overall though the JPX850 is quite a low spinning driver relative to the market so it will require quite a high swing speed to get the benefits from this adjustability.

If I was being picky then a feeling of a little more explosiveness would give it a greater feeling of oomph and that could be important to grab attention when consumers try the JPX850 against some of the competition.

What the Nike doesn’t do is also allow you to also move the CG left to right using the heel and toe positions and I like this option in the JPX850 , especially when you have an adjustable hosel that enables the face angle to change.

This is because changing the face angle will also affect the lie and that will affect the shot shape left to right. Therefore being able to partially neutralise this with a weight in the heel or toe is a useful feature.

You can see from the 7.5° starting loft that this is aimed at better or certainly high swing speed players. Having the Fast Track weights in the back settings at 11.5° would probably give it little higher effective loft in terms of launch, so in reality Mizuno are covering most players who would look at a compact headed driver like this.

The 8.5° to 10.5° range is where most players will be and then they can use the Fast Track to alter the spin on these lofts to get the effective launch of the 0.5° lofts in between. You should have every eventuality covered with the choice of ten different two weight combinations for each loft, plus another 6 if you use one or zero weights.

And this I think is the only issue with the JPX850. Like most adjustable drivers you are going to have to be fitted professionally to get the maximum performance so there is a time premium as well as a significant price premium to owning a high performance machine like the JPX850.

With all the reviewing I do, I go on a lot of launch monitors and I know I am usually around 9.5° to 10.5° depending on the CG placement of the driver with a mid-launching stiff shaft. Now assuming the shaft is OK for me, I set the JPX850 to the lower of my range at 9.5°, put one weight in position 1 to add some spin to account for the lower loft and the other in the heel to create a little rolling draw.

It did the business and felt great, but is it the optimum for me? Could be? But even with my experience, without a launch monitor set up outside and someone who can interpret the results, I am just guessing at which of the 128 possible combinations are best for me and that is before I even get into the shaft.

It is a more forward CG driver than the Mizuno JPX EZ driver below, which as you can see has a deeper head with the sole weight positioned further back.

An off the shelf product this is not, but neither are any of these premium adjustable drivers, so if you are interested then please go and get custom fitted.

So should you be interested? On the whole, I would have to say, yes.

The Fast Track system is well thought out and has one of the best systems for moving the CG back, forward, left and right and any combination in between.

The 440cc JPX850 is 10cc smaller and also looks a lot better and less pointy than the previous JPX825 driver, but to me it is a very different club and closer to the DNA of previous MP drivers.

Hopefully they keep this vibrant blue going forward as it is by far the best looking coloured head Mizuno has done. The compact head sits lovely at address, it sounds and feels good and everything about this says premium.

And maybe that is the only thing. It’s not cheap and you are paying for the innovation and engineering in the head and, unless you like that sort of thing, you could probably get the same or better performance with less fuss from a cheaper model in the market. I confess, I am saying that with a heavy heart, as the JPX850 is easily the best driver Mizuno has done to date, so keep up the good work boys.