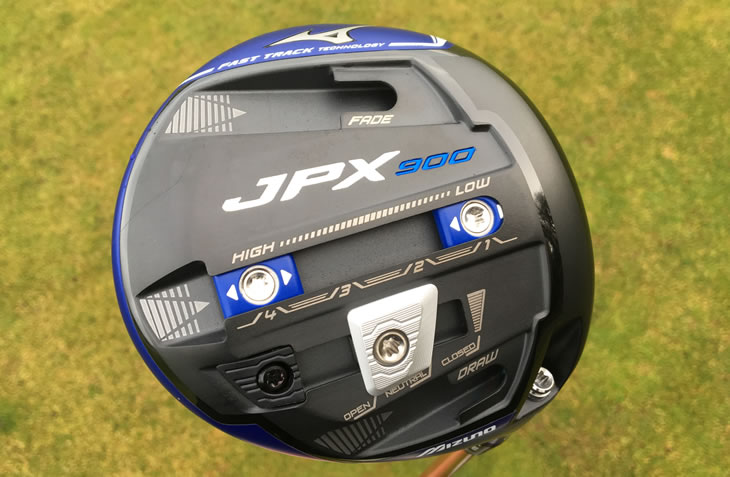 Mizuno JPX900 Driver Review – You don’t really think of Mizuno as a driver company, but with every iteration their clubs get better and the JPX900 driver continues this trend. 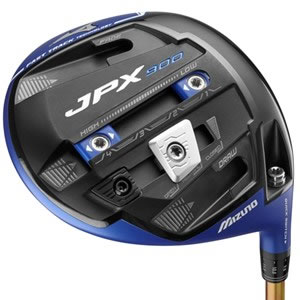 Yes it is blue again, but now it is more of a matte, husky shade of blue which I like, but maybe not as much as the gloss darker blue of the pervious Mizuno JPX850 driver.

Even though both heads are 440cc, the JPX900 looks larger at address because Mizuno has made it shallower and deeper in order to make it more forgiving.

The wider head of the JPX900 also sounds a little higher pitched as the sound echoes around the larger chamber, but this gives it a more powerful sound, so it is all good.

The sole features the same Fast Track design as the JPX850, but now the heel and toe ports for draw and fade are further apart and the central track is also longer.

It also now has four positions marked instead of three, but in reality you can position the two 8g weights wherever you like, which gives an extra element of flexibility.

The head is set at 9.5° in the neutral position and you can vary this up or down 1° or 2° in a standard or upright lie using the adjustable hosel, which is also backward compatible to previous heads or shafts.

When you adjust the loft you will also change the face angle and the lie and if you don’t like the way the face looks when you add loft then the new feature of the silver face angle prop on the sole will realign the face back where you like it.

It does look a bit agricultural and I am not sure what it does to the aerodynamics, but it does the alignment job very well and orientates the face wherever you want it.

This has been tried before on the TaylorMade R11 and R1 drivers and I was sceptical then as it only works if you take your grip on the driver after you have grounded it.

The Mizuno version does a better job and it is purely a visual thing as changing the loft will change the inherent angles and weight balance of the club and there is very little you can do about that.

When you put it down at address the larger head sits very well behind the ball and it’s hard to believe that this larger looking head is just 440cc.

The JPX900 comes with an orange Fujikura Evolution II shaft that clashes nicely with the blue head, but is a much higher quality shaft than usually comes as standard with Mizuno woods.

I will admit that I have a soft spot for this model of shaft as I know it suits my swing. Therefore after a bit of initial testing gave some very accurate drives, I was able to forego the heel and toe weight positions and place both weights in the central Fast Track for maximum oomph.

From my previous review of the JPX850 driver I knew that my optimum set up was 10.5° with both weights split in the centre, so I set up the JPX900 in the same way to compare it and used the face angle prop set at open to square up the slightly closed face.

As you can see from the SkyTrak results below, the JPX900 was spinning 1000rpm higher and losing a lot of distance as a result and that shows you how the deeper JPX900 head will offer you more launch and forgiveness than a shorter taller JPX850 head.

In order to get the spin down I reduced the loft to 9.5° which opens the face up so I could move the face angle prop back to neutral. I also moved both weights forward to positions 1 and 2 in the Fast Track to keep the spin down as the launch angle was still high enough.

The results were pretty impressive as the ball speed went up 3mph, the spin came down just over 800 rpm and I gained 11 yards carry with more roll than the previous setting.

This set up put the JPX900 right up there with the longest drivers I have tested this year even if it is not necessarily past them, so it is competitive in the right set up with the right shaft.

However that will be the case for most drivers, but this proves the difference that moveable weights and, more importantly, adjustable loft can have on performance and why using a fitter with a launch monitor will help you get the most from your not inconsiderable investment.

And this is the rub with this product. Unless you are desperate for a blue head, are you going to walk past the higher profile, similarly priced models from companies with a history of making drivers that deliver similar or better performance to pick up a Mizuno?

Mizuno die-hards will be sprinting past them to the JPX900 to upgrade from JPX850 and rightly so. If you can get a set up that matches your swing and delivers the best results for you, then I don’t see any reason why you should not do so as well.