He’s not leading the tournament, but through one round of the season-ending DP World Tour Championship Francesco Molinari remains in line for a serious payday.

The Italian has topped the season-long Race to Dubai standings ever since he got his hands on the claret jug in July, and this week the only player that can take the overall crown from him is Tommy Fleetwood, who won the Race to Dubai last year.

But Molinari got off to a solid start in Dubai, shooting a 4-under 68. It left him two shots off the early lead, shared by Adrian Otaegui and Jordan Smith, but left him one ahead of Fleetwood who carded an opening 69.

The gap between the two friends, who teamed for unprecedented success at the Ryder Cup, seemed like it would be larger than just a single shot until the final hole. But Fleetwood rolled in a lengthy birdie putt from off the 18th green, and Molinari followed by missing a short par putt of his own for a two-shot swing that kept Fleetwood’s faint hopes for back-to-back titles alive.

At 4 under, Molinari is currently tied for fifth among the 60-man field, and should he finish the week inside the top 5 he would clinch the Race to Dubai crown regardless of Fleetwood’s performance. But if he falls lower than fifth, Fleetwood would have an opportunity to pass him at the finish line with a win in the season’s final tournament. At 3 under, the Englishman is currently tied for 10th in a large group that also includes Rory McIlroy and Patrick Reed.

Jon Rahm and Danny Willett are tied for third after both shot rounds of 5-under 67, while the group at 1 under includes Sergio Garcia, Henrik Stenson and Xander Schauffele. 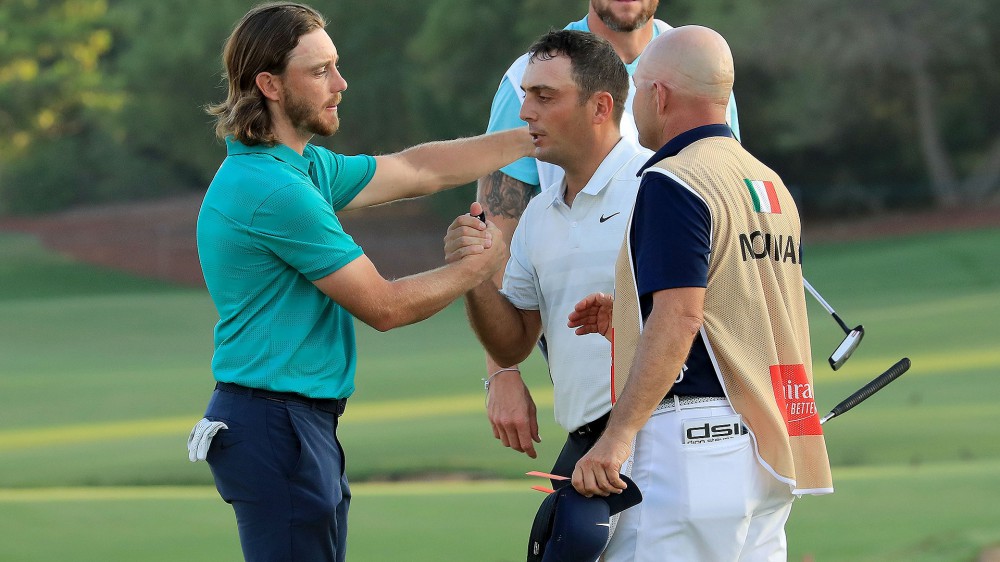 Woods could reach as high as No. 6 with Hero win