PHOENIX – Nelly Korda was just 12 years old when Hall of Famer Juli Inkster got her first scouting report on the junior.

As part of the LPGA’s rookie orientation, Inkster was being shadowed in a pro-am by Jessica Korda, Nelly’s older sister. This was back in 2011.

“We were talking about different things, and then Jess started talking about her little sister,” Inkster said Wednesday while preparing for the Bank of Hope Founders Cup. “She said, ‘My sister’s going to be good. She’s way more competitive than I am.’

“It kind of stuck with me, because I see Nelly out there now, and that’s what I see. She’s very competitive. Her golf swing is beautiful. I would love to bottle it. She’s got an all-around game. She’s young, still learning to win, but I love her spunk.”

Fast forward to Nelly’s LPGA rookie year back in 2017. With Inkster in her second stint as the U.S. Solheim Cup captain, she was looking over potential prospects during a practice in Houston and put Nelly with Stacy Lewis, the two-time major champion.

Lewis told Inkster virtually the same thing Jessica did all those years before, but in even stronger terms.

“I was blown away,” Lewis said. “She’s super talented, obviously, but she’s got a little bit more spunk and attitude in her than Jess.”

Nelly didn’t go on to make that team as a rookie, but she made an impression.

And that’s why nobody is surprised that Nelly is the highest ranked American in the world teeing it up this week at the Bank of Hope Founders Cup. At 20, beginning just her third LPGA season, Nelly trails only Lexi Thompson, 24, among the Americans in the Rolex Women’s World Rankings, but Thompson isn’t playing this week.

Korda could leave this week as the highest ranked American in the world, period.

Korda is the brightest new star on the world stage. Her victory at the ISPS Handa Women’s Australian Open last month was her second in less than four months. She has four top-10s in four starts this year. She has finished third or better in four of her last seven starts.

As Korda’s profile soars, so do expectations.

Can this young starlet move all the way to No. 1?

No American has been there since Lewis held the top spot five years ago.

“Starting as a professional, my goal was to become the No. 1 player in the world, as it is for everyone,” Korda said. “So, it’s at the back of my head, but I’m not going to really think about it too much. I’ve been doing quite well. So, I’m just going to take it week by week, shot by shot. That’s something my coach and I have really worked on. He keeps reminding me of that all the time.”

“I think the hardest thing in this situation is dealing with the expectations of other people,” Whelan said. “I think that puts pressure on you more than anything else.”

Whelan believes having Jessica as a mentor, and having parents who were tennis stars, as Petr and Regina Korda were, will also serve Nelly well as she adjusts to becoming a top-10 player.

A former European Tour player, Whelan said he tries to pass along his own experiences to Nelly, what some of the greats of the game have told him.

“Back in 1998, I played with Tom Watson in the British Open,” Whelan said. “I didn’t play particularly well the first two rounds. After, I asked Tom what he thought, and he told me, ‘Just keep it simple. My breakthrough was realizing I didn’t have to be perfect.’ I thought that was the best thing he could have told me.”

So that’s what Whelan is preaching to Korda.

“I want to practice perfectly, and I want to play perfectly all the time,” Korda said. “He thinks I’m such a perfectionist, and that’s one thing we always kind of argue about.

“I’m starting to kind of get the grasp of, ‘You can’t be perfect all the time.’”

Whelan likes the echo of Tom Watson he hears in that. 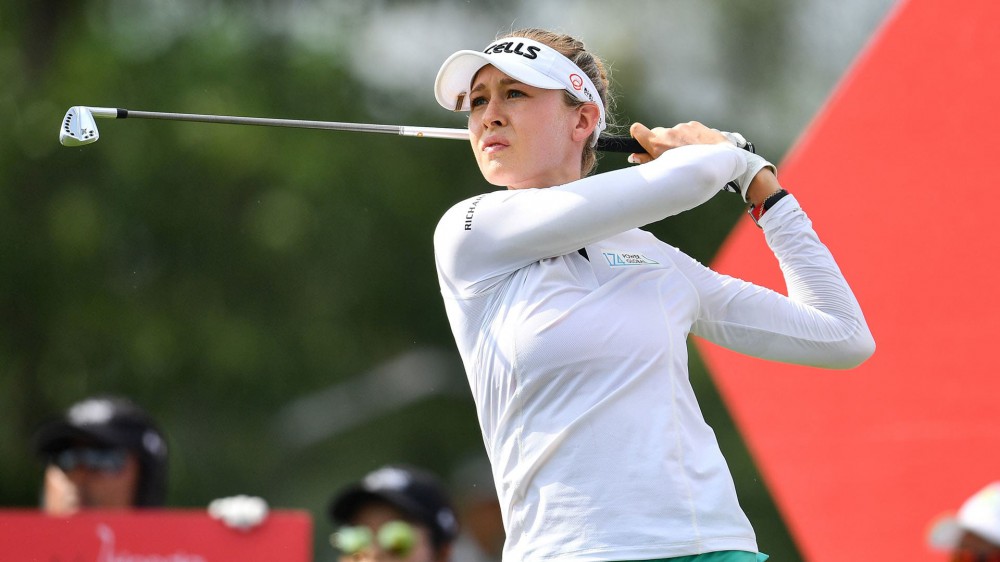