Nike Vapor Driver Review – As is common these days, Nike has launched not 1, not 2, but 3 models in its Vapor driver range. Why? Well, even though each one is adjustable, the head size and structure is engineered to produce different types of ball flight depending on the player’s swing. 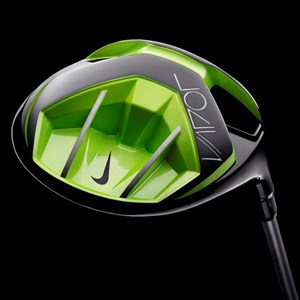 Now this is not based on handicap, but more on launch angles, club head speed and ball spin. The idea is that you turn up at a fitting centre and go through the process and the right club will choose you, instead of you making a wrong decision. So that’s what I did by heading to the Nike Performance Fitting Centre at Archerfield in East Lothian.

Even though there are 3 models of Nike Vapor driver called the Speed, Pro and Flex, they all share the same key technologies and styling, so let’s review the common features first.

The most noticeable feature is the ‘volt’ coloured Covert Cavity that is retained from the previous Nike Covert 2.0 driver. Although this is the 3rd version to reach the market, it is the 37th iteration Nike created internally and it is much better than the 2nd public version.

The silver FlyBeams that go across the cavity help to visually fill in the space, but more importantly they strengthen the cavity to make it more stable. The aim of this is to increase the Moment of Inertia (MOI) by moving weight to the perimeter of the clubhead to make it more forgiving.

I think it works better in the Vapor driver than it did in the Covert. The previous Covert driver sounded quite hollow and I was expecting this to be the same, but all 3 models sounded very good indeed.

Nike were one of the first to use a Compression Channel and then they got rid of it for the two Covert drivers, which seemed odd at the time. However, it turns out the manufacturing processes could not handle a cavity and a channel in the same club until now. This is a common theme to a lot of the driver channels that are currently being launched.

The Nike channel is wider in the heel and toe but narrower in the centre in order to keep the face legal. It does this job well and works with the Covert Cavity to give very good feel across the 3 Vapor drivers.

The final bit of tech is the FlexLoft 2.0 adjustable hosel that is 5 grams or 30% lighter than the previous version. It is also compatible with previous drivers so you can swap heads with an existing Nike shaft if you want to.

The FlexLoft 2.0 enables you to change through 5 lofts from 8.5° to 12.5° in 1° increments and then use a second ring to set these in 3 different face angle settings that go from neutral to 1.5° left or right. That gives you 15 settings in all and whilst the further you go away from 10.5° the more it will change the lie, the subtle changes in the middle of the range do enable you to fine tune the set up of the driver without affecting it too much.

It’s also relatively unobtrusive at address and the reduced weight enables Nike to move those 5 grams elsewhere in the clubhead to make the club more forgiving.

The Vapor Speed driver is easily identifiable by the silver face and sole plate and this is aimed at mid-handicappers and moderate ball speed players.

The head looks a little larger than the other models at address, even though the volume of all three is a 460cc profile. Nike calls it a ‘profile’ as the cavity is assumed to be filled for the purposes of legally measuring the volume. The bigger footprint gets the ball up in the air more easily and as a result it flew a little higher too.

The Vapor Speed head is more rounded and sits a little closed, again to help slower swing speed players get it going high and straight. It is also lighter and that is possibly why it did not feel perfect for me as my swing speed needs a little more weight in it.

However as an all round performer then the Vapor Speed is going to be a very competent driver for a lot of players.

This was more my club. Not only because of the darker looks with the black face and sole plate, but because it sounded and felt so good.

It sat a little more neutral at address and the more pear shaped head still looked large enough to be forgiving. Like the other Vapor drivers, the volt Swoosh on the inside of the heel did not put me off as much as it used to on the Covert. Some may prefer to have seen a small swoosh on the centre of the crown as an alignment aid instead, as the all black look was very clean otherwise.

That is about the only thing I can think would improve the Vapor Pro as the flight was exactly where I think most golfers will want it. By using all the FlexLoft 2.0 settings I was able to see a wide variety of sublte changes in flight, so this will suit a lot of players.

The heavier Diamana shaft matches the head perfectly for me and if you can get this shaft/head combination right then I could see a lot of single figure and even low double digit handicappers going for this model. It is the driver Rory used for the first time at the 2014 Ryder Cup so that says it all.

Last, but not least, is the Vapor Flex which is different to the other two models because it has the FlightPod adjustable weight in the sole.

The 9.5 gram FlightPod cylinder is made of Nike’s RZN material that has a high density weight at the yellow ‘Mid’ end to move the centre of gravity (CG) forward and back.

It was very simple to unscrew the FlightPod with a quarter turn of a wrench and put the heavier ‘Mid’ setting at the back for more spin and forgiveness. If you need to reduce spin then put the lighter ‘Low’ end at the back and you should get around 300 rpm less spin on your drives.

If having an adjustable CG is not enough of a clue, then the smaller, slightly open face shows that the Vapor Flex driver is aimed at elite players with high swing speeds. It also has a slightly more rounded pear shape than the Vapor Pro and a taller crown that makes it appear a little more compact at address.

Changing the orientation of the FlightPod did visibly alter the height of the ball flight, but for most single figure players, the Vapor Pro will be the better performing club as it will give the same performance, but with more forgiveness and less effort.

The sound and feel of the Vapor Flex was more firm and a little more solid. I felt the FlightPod also put more weight in the middle of the club and negated a little of the high MOI benefits that the Covert Cavity gives the other Vapor drivers.

Overall I think Nike has down an excellent job with the Vapor driver range. Now that the Covert Cavity combines with the Compression Channel, I think it adds to every aspect of the club more than it did before on its own.

The Vapor Flex is almost a different propostion and I nearly reviewed it separately because the FlightPod makes it look and behave differently to the Speed and Pro models. However the cavity and the channel make it a Vapor, albeit one for a niche audience of high swing speed players who can benefit from the lower level of forgiveness to shape the ball more. Nike say Tiger Woods prefers the Vapor Flex for this reason, whilst Rory prefers the Vapor Pro because he shapes his driver less.

The real gems are the other two models which deliver in all departments, especially the Vapor Pro which I feel has a wider appeal than I initially thought when I first saw it on paper. As always it is key to visit a fitting centre to try out all the variations and see which model in which settings suits your game best.

After years in the driver doldrums, Nike should be in full sail with the Vapor driver range, as this is the best driver they have made to date.