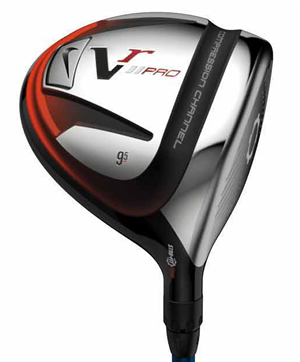 The look and shape of the head are more classic pear-shaped than Nike’s previous drivers and the club seems to sit slightly open at address.

In our tests, the Nike VR Pro felt and sound so much better than the previous version and a worthy challenger to the other mainstream drivers in the market.

The Compression Channel technology appears to be working well, adding additional ‘pop’ at impact, and the penetrating, mid to high ball flight was equally impressive.

The STR8-FIT adjustability was a little fiddly to operate, and the look of the hosel at address is not ideal, but the difference the adjustment technology is noticeable with big dispersions left and right at the widest settings, although more subtle changes are possible.

The Nike VR Pro is aided by the Project X shaft, which felt light, yet powerful through contact.

Overall we were very impressed by the VR Pro Driver and would recommend it to any low-to-mid handicappers in the market for a new driver.