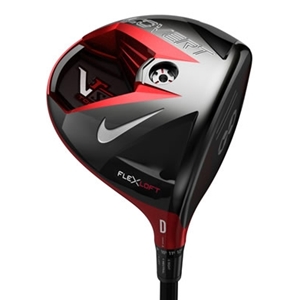 Apart from the white Nike swoosh on the inside of the heel, the dark red looks of the Covert Tour driver look great at address and complement the black face well. The 2 white groove lines on the bottom of the face really help with alignment too.

The face is still a generous size and the NexCor design offers pretty good forgiveness for this class of driver. The Mutsubishi Rayon Kuro Kage shaft is a good quality stick for a premium driver and helps drive the performance of the club.

On the course the Covert Tour driver felt very solid but did not give as much feedback as we would expect from a Tour driver. Maybe it is the hype that Nike have whipped up about this club, but it was a little underwhelming, even though there is nothing to complain about the cavity idea itself.

The cavity is a different take on the weight distribution for drivers and Nike should be congratulated on stepping out with this design. It does remind us a little of the square driver idea of weight in the sides and back corners rather than the middle of the back, but that could just be us.

One of the main features of the Tour version of the Nike VR_S Covert driver is the FlexLoft adjustable hosel. This covers one of the biggest ranges of loft we have seen with 4 degrees in one degree increments from 8.5 to 12.5 degrees. In addition it is only the second consumer driver we have seen that offers a second adjustable ring which is there to change the face angle to left/neutral/right.

Whether this also changes lie would be useful to know as you do need to be able to adjust loft and lie independently to really make adjustability work. However the sole has a decent camber on it so the changes in loft and face angle should mean that the lie of the club can adjust to suit the player easily.

Having 1 degree gaps is good, but maybe some more fine tuning at 0.5 or 0.75 degrees would have been better for a tour driver as there can’t be many elite players who would need to increase their loft to over 11 degrees.

I am sure Rory can get this baby to go as far and as straight as he wants, but for the rest of us the Nike VR_S Covert Tour driver maybe needs to deliver a bit more to justify the higher price.