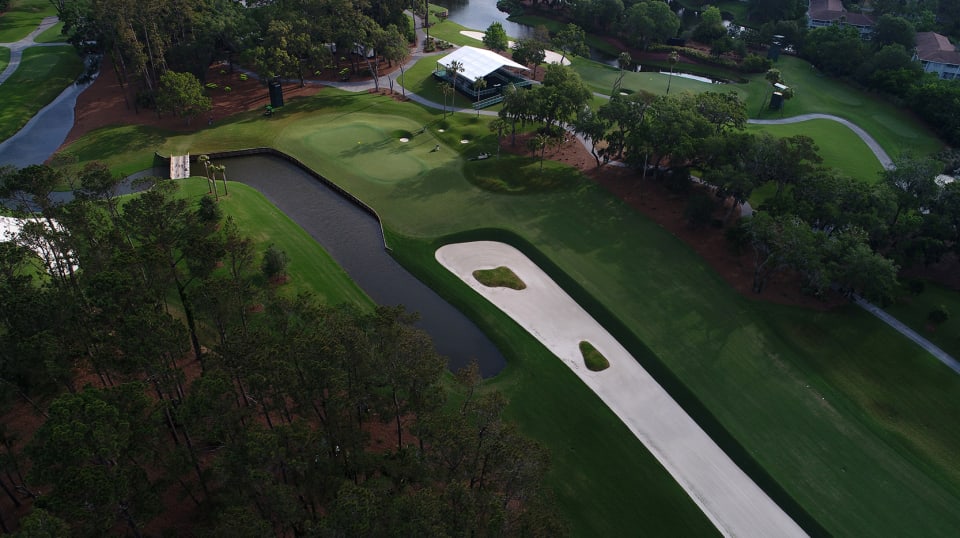 PONTE VEDRA BEACH – PGA TOUR officials have made the biggest adjustment to the drivable 12th hole at TPC Sawgrass since its complete renovation in 2017, setting a plan to play it both long and short at the 2021 PLAYERS Championship.

The short 302-yard par-4 was renovated in 2017 from Pete Dye’s original design, creating a risk-reward drivable scenario with water flanking the left side of the green and a sand hazard doing the same in the layup zone.

A back tee was retained to mirror the length of the longer original hole but to date hadn’t been utilized at THE PLAYERS. In the three full THE PLAYERS Championships prior to this year’s 2021 edition, the hole played anywhere between 281 and 317 yards but now it is set to top out around 369 yards. The back tee was in play in Tuesday’s practice round at TPC Sawgrass at 364 yards.

Officials have made the change to preserve Pete Dye’s initial design thoughts and to help facilitate a swifter pace of play over the opening rounds given the 154-man field size. Dye originally designed both sides of TPC Sawgrass to start in a similar fashion as he recognized tournament play often starts off the first and 10th holes.

Now both sides have two similar length par 4s, a par 3 and a par 5 over the first four holes. Fans can expect the drama of the shorter tee on No. 12 to ramp back up again over the weekend rounds once the cut to the top 65 players and ties is made.

“What triggered this more than anything was the increased field size and the move to March which brings the north wind into play,” PGA TOUR Rules Official Stephen Cox explained.

“The more we looked into it the more we felt this year is a good year to trial it and get player feedback. If you do get that north wind then the 11th hole tends to be reachable downwind and then you turn around for a drivable par 4 which often doesn’t aid pace of play from a flow perspective.

“This year, more than any, pace of play will be a focus for us given the increase in field size. The final piece to this was the strategic element in starting rounds one and two. It’s a similar start across the two nines now, much like Pete Dye intended.”

TOUR driving distance leader Bryson DeChambeau, who won at Bay Hill last week, would be one of just a few players who can consider the maxed-out length still legitimately drivable. While he hadn’t been out to test the new spot when asked, he said he’d likely still be going after the green.

“Wow, that’s cool. If they want to do that, that’s great. Hopefully the length should still be an advantage,” DeChambeau said. “If it’s downwind, yeah, I’m sure I will (go for it). Even if I can hit it up next to the green and chip it on.”

DeChambeau prefers the hole in its shorter format – where he says he can reach with a 5-wood – as while he may now be one of a few who can reach, the risk has been taken away from a large portion of the field.

“Putting it all the way back there is going to take a lot of people out of the equation from trying to drive it,” DeChambeau said. “And it may make the hole easier for some people because then they aren’t going for it and taking that risk-reward on and making a mistake. Now they’re hitting 3-wood or whatever down the right center and then hitting a wedge on the green and making birdie one or two days, where they would be going for it every single day and maybe they make a mistake.”

Having been uncomfortable on the hole in the past, former FedExCup champion Justin Thomas says laying up doesn’t make things all that much easier.

“It’s not a comfortable yardage or shot shape for me, but that being said, I’ve made plenty of birdies,” Thomas said. “If you lay it up, it’s extremely narrow and then you’ve got a green that all falls away from you or some tough pins, so you just have to commit to whatever you’re doing is what I’ve learned on that hole.”

Defending PLAYERS champion Rory McIlroy expects he will also still swing away for the fences even if the green isn’t his target.

“If you can cover that long bunker that runs up the left side you’ve got quite a wide landing area to hit into there. I think you’re still going to see a lot of guys hitting driver from that back tee.”