Home Golf News & Information One year from now, all dreams will turn to Olympic gold 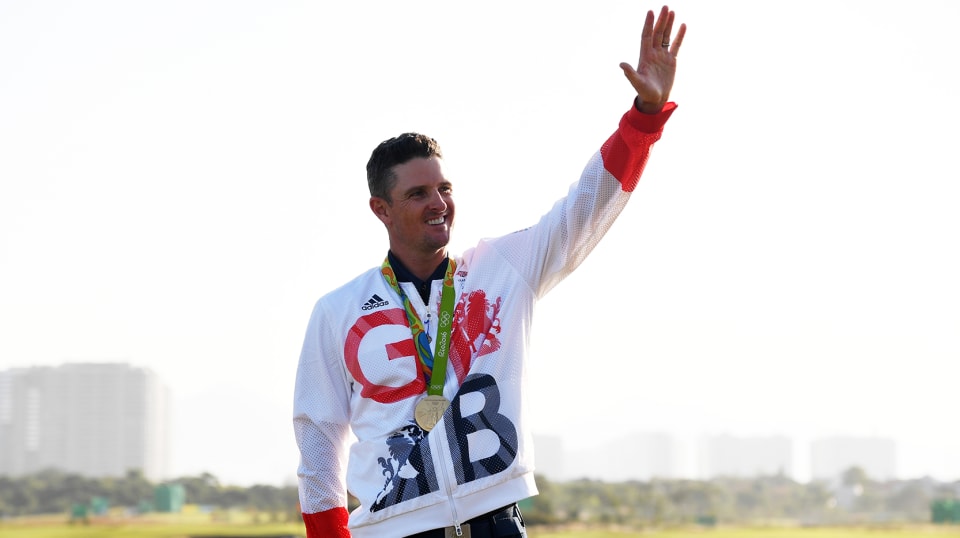 Justin Thomas visited swimmer Michael Phelps’ house one day in Arizona. Phelps, as you likely know, is the most decorated athlete in the history of the Olympics, with 23 gold medals and 28 overall.

JT naturally was curious to see at least one of Phelps’ medals.

Phelps refused. He didn’t want to reveal where he kept them.

“You would think when you have that many, it would just be you have one laying on the kitchen table or something, but apparently not,” Thomas said with a sly grin Tuesday in telling the story. “So that was a swing and a miss there.”

Thomas, however, has seen Olympic gold in person. It was the medal Justin Rose won four years ago in Rio de Janeiro when golf returned as an Olympic sport for the first time in 112 years.

Rose was showing it around. JT took a long look. However, he did not touch it. “I’m kind of superstitious,” Thomas explained. “…  I’m like, good for you, but I want one for myself.”

Were it not for a global pandemic, Thomas likely would be in Japan this week chasing after that gold medal at Kasumigaseki Country Club. Instead, he’s at TPC Southwind, seeking his second World Golf Championships title at the WGC-FedEx St. Jude Invitational in the PGA TOUR’s reconfigured playing schedule.

The 60 golfers eventually competing for Olympic medals must wait until this time next year, due to the rescheduling of the Tokyo Summer Games. The next 12 months leading up to the Opening Ceremony will be a busy one in the golf world, including a FedExCup title, THE PLAYERS Championship and seven majors to be decided, as well as the WGC events that bring together the world’s best players.

Of course, the Olympics generally are regarded as the biggest stage in all of sport – a key reason why officials from all golf entities sought inclusion after those 112 years since golf last appeared in the 1904 Olympics in St. Louis.

For more than a century, golfers never dreamed of winning Olympic gold, or participating in the Opening Ceremony. Now they can’t wait for the next Olympics to arrive.

“To me, it’s a big deal to hopefully be an Olympian,” Spain’s Jon Rahm said. “It’s not something golfers grew up with in their mind; it hasn’t been for a very long time. For most sports, almost every sport, being an Olympian or being an Olympic gold medalist is the pinnacle for many. Unfortunately, it’s not that in golf yet, but I think, given time, we’ll get the recognition it deserves.”

Rahm recently ascended to No. 1 in the Official World Golf Ranking, which also puts him atop the list of 60 players in the latest Olympic Golf Rankings. Players will have until June 21, 2021 to earn a spot for the Tokyo Games, with countries limited to two players each (except for countries with players in the top 15 that allows for a maximum of four golfers).

Four years ago, Spain was represented by Rafa Cabrera Bello (T-5) and Sergio Garcia (T-8) – the only country in which both players finished inside the top 10. The United States had two of its four players inside the top 10 – bronze medal winner Matt Kuchar and Bubba Watson (T-8).

“I hope I can be one of those,” Rahm said. “I hope I can represent my country and win a gold medal for them. I have been fortunate to win gold medals around Europe and win the world championship for Spain as an amateur.

“Up until that point, you didn’t really have anything afterwards as a pro. So I’m really excited hopefully to one day be an Olympian and hopefully add a medal to the Spanish medal count as a golfer, which is just something that wasn’t a reality a few years back and now it is. It would be a true honor.”

Thomas is third in the Olympic Golf Rankings. Were the Tokyo Games being held this week, he would be among four Americans receiving invites, along with Webb Simpson, defending WGC-FedEx St. Jude champ Brooks Koepka and Bryson DeChambeau.

JT said he spoke to some of the Americans who played in Rio (Rickie Fowler and Patrick Reed were also competing) but doesn’t really know what it might be like “because I’ve never experienced anything like that, if that makes sense. It’s hard to compare anything. Probably like a couple junior events where you kind of represent your state, that’s the only time that you have that many teams, if that makes sense.

“In terms of an accomplishment, winning a gold medal would just be the coolest thing ever.”

The only living male golfer who knows what that’s like is Rose, who finished two strokes ahead of his good friend Henrik Stenson, who claimed the silver. Rose would not been in the field had the Olympics been played this week and will need a productive 12 months in order to move up the standings, make the Great Britain team and give himself a chance to defend.

Rahm, meanwhile, is well ahead of Garcia and Cabrera Bello among Spanish golfers and should have no problems qualifying for Tokyo. But he wants more than just a spot in the field.

“I know golf is maybe different to the way we think some Olympic sports are, but still, you are an Olympic gold medalist,” Rahm said. “It’s as simple as that. It’s a true honor that … I don’t know when, maybe 10, 20, 50 years, we’ll be like, wow, Rosey was the first gold medalist winner in a very long time and he’ll get the recognition that he deserves.”