EVANS, Ga. – An hour before the start of the inaugural Augusta National Women’s Amateur, heavy fog blanketed the grounds at Champions Retreat Golf Club. Participants, the trailblazers for this landmark tournament, were bundled up as they hit balls and struck putts in frigid temperatures. Patrons began to trickle in, and the atmosphere could best be described as a quiet calm.

But as the morning’s first tee time approached, the sun came out, warmer air set in and soon the first tee was surrounded by more than 100 onlookers.

Among those standing inside the ropes were Augusta National chairman Fred Ridley and past USGA president and Augusta National member Diana Murphy. The winner’s trophy, made of sterling silver and 24k yellow gold, shined bright. It was a near-perfect setting.

Then, right as the clock struck 9 a.m. ET, the starter pierced the silence with an announcement, “Ladies and gentlemen, welcome to the Augusta National Women’s Amateur. Fore, please. Now driving: Jennifer Kupcho.”

Kupcho, a senior at Wake Forest and the top-ranked amateur in the world, said a day earlier that it didn’t immediately set in that she’d be hitting the first tee ball in tournament history.

“I knew I was going off first, but I didn’t really think about the first tee shot,” she said.

Kupcho calmly stepped up and sent her drive down the first fairway on Arnold Palmer’s Island Course, the nine-hole layout that serves as the first nine for the opening 36 holes. (Jack Nicklaus’ Bluff Course completes the 18-hole loop.) Kupcho’s ball landed in the left-center part of the short stuff, an ideal drive according to the spectator guide, and Kupcho handed her driver back to her caddie, dad Michael, with a smile.

Her playing competitors, Arizona State’s Olivia Mehaffey and Thailand’s Atthaya Thitikul, followed with nice drives of their own, and just like that, the highly-anticipated Augusta National Women’s Amateur had begun.

The wait is finally over. Now, fans of women’s golf can sit back and enjoy the show. 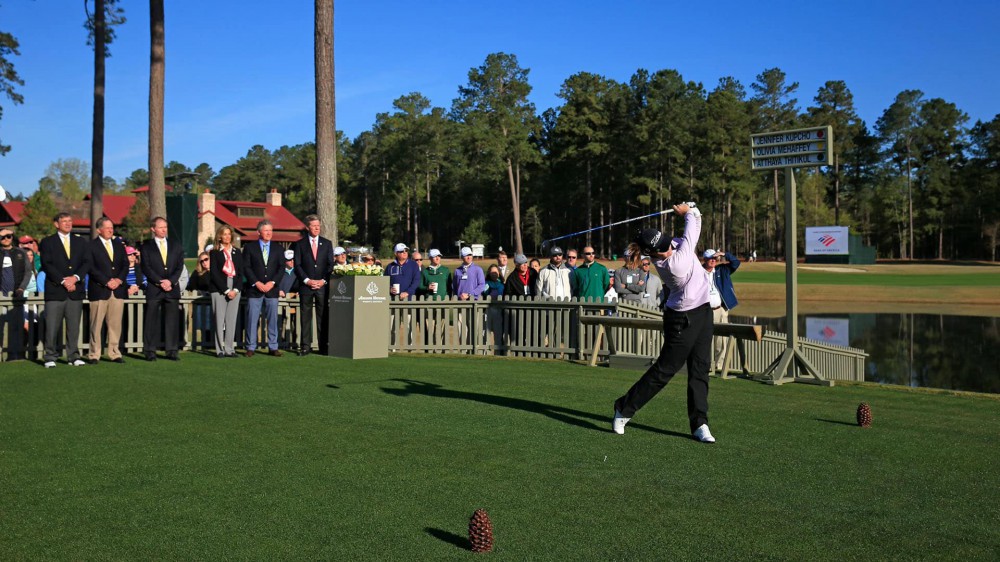