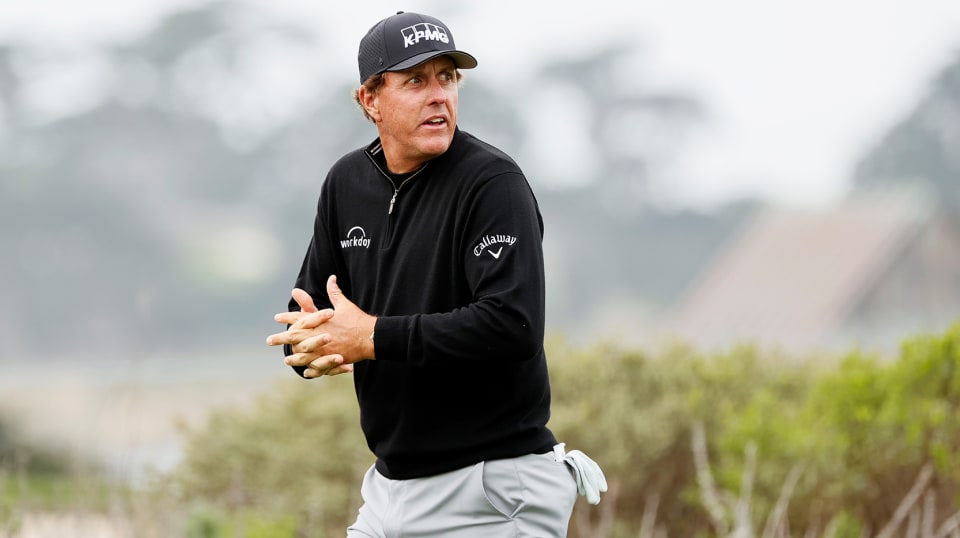 Phil Mickelson could only laugh after a tough finish to Friday’s round at Pebble Beach.

“Paul, that’s a nine. I’m kind of crushing the par-5s right now,” the World Golf Hall of Famer said with a smile to playing partner Paul Casey after tapping in with his glove on to complete a second-round 80 in the AT&T Pebble Beach Pro-Am.

Mickelson hit two balls in the water on Pebble Beach’s famed finishing hole en route to a 9, four holes after a double-bogey on the back-nine’s other par-5. This was Mickelson’s 25th appearance at Pebble Beach and even after Friday he still has more wins here (5) than missed cuts (4).

Mickelson’s 80 ties his highest round ever in this event. He also shot 80 at Pebble Beach in the final round in 2003. This was just the eighth quad or worse on a par-5 in Mickelson’s career.

He had finished in the top three in this event in four of the past five years, including a win in 2019 and third-place finish last year.

Mickelson’s closing 9 included two shots blocked left into the rocks that guard the left side of the famous dogleg left par 5. He already was 3 over on his second nine (and 4 over for the tournament) when he tried to get home from 265 yards with his second shot, the ball caroming off the rocks and into the deep blue waters of Stillwater Cove.

He took a drop, then blocked another shot left into the rocks from 176 yards, dropped once more and hit his sixth shot into a greenside bunker. An escape and two putts left him with a 9.

Mickelson had fought his way back near the cut line with a near 50-foot chip-in for birdie at the par-4 10th, climbing to even par for the round, but his hopes to play on the weekend were dashed when he pulled a drive out-of-bounds right on the par-5 14th hole. He made double, and that was followed by bogeys at Nos. 15 and 16.

Mickelson last won at Pebble Beach two years ago, edging Casey for the title. His five AT&T championships ties him with Mark O’Meara for most victories at Pebble Beach. It was Mickelson’s fourth missed cut in eight starts in 2020-21, his best finish being a T-44 at the season-opening Safeway Open.