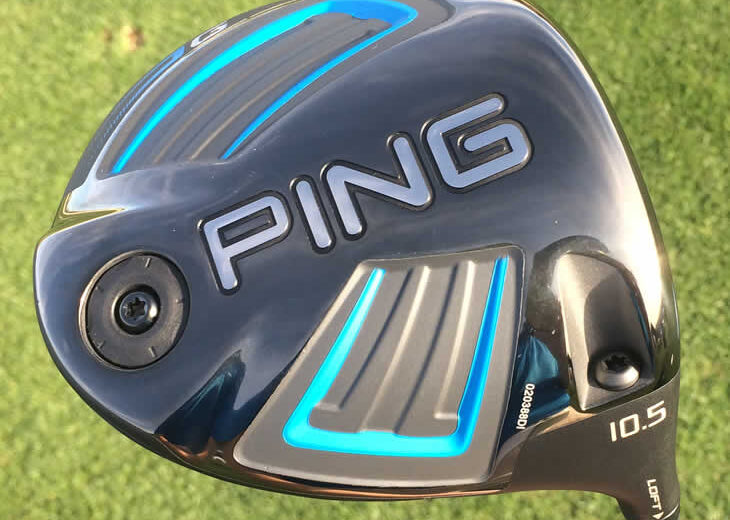 Ping G Driver Review – Right from the start of the G driver franchise in 2004, Ping has had a top selling product on its hands and with good reason.When they combined a forgiving performance head within a good looking package then it’s going to work. With each iteration they have managed to move the design forward, thanks in part to having longer product life cycles between versions than most manufacturers.

The sixth iteration is simply called the G driver and when I asked Ping why, they said they felt the numbers were getting too large, but this does not mean it is the final version of the range either. 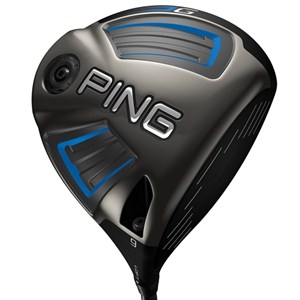 The previous G30 driver introduced us to the Turbulators on the crown of the club that act to disrupt the airflow over the head to allow it to move through the air faster.

The Ping G driver sees some remodelling of the size and angle of the Turbulators and when visiting their factory I saw some of the variations they tried in testing.

However what you will notice more on the crown is the Dragon Fly Technology. Inspired by the wings of the said insect captured on camera by CEO John Solheim and sent to his designers whilst on holiday in 2011, these maintain a strong structure using beams to support the rest of the wing.

Ping’s designers took this theory into titanium and what you can see is the beams supporting five sections of thinner material on the crown. Underneath this on the inside is another lattice you can’t see that does the same job. The result is a titanium crown that is just 0.43mm thick in places, well below the 0.5mm minimum that was previously thought possible.

This saves 8g of weight which is then moved to the sole to move the Centre of Gravity (CG) 1.2mm lower and 1.6mm deeper than in the G30.

The drop in CG height of the G is a bigger change from the G30 than between the G30 and G25 and keeps Ping’s CG position as the lowest and deepest amongst the major manufacturers.

This not only makes the club more forgiving, but also enables you to play a little less loft as the deeper CG launches the ball more easily. Having less loft creates a little more ball speed, so if you are between loft settings then it is probably going to be best to loft down rather than up.

The back of the head features a new aerodynamic feature called the Vortec which acts like the spoiler on the back of an articulated lorry.

This smoothes the airflow as it leaves the head and reduces friction turbulence meaning that the designers can gain extra club head speed at ‘no cost’ to the weight or design of the club.

The weight saving from the crown, the lighter 8-1-1 Titanium chassis and the various fins mean that the footprint of the head can be a little larger overall and a little more rounded than the G30. Combined with the Dragon Fly design on the back of the crown it does make it look a lot better at address too.

The performance advantage over G30 in terms of speed is going to be marginal as one of Ping’s professionals was only gaining 1mph ball speed on a 115mph driver swing speed and he de-lofted his club by 0.25°.

With the G30 this level of gain came at a slower 100mph, so there is likely to be a distance improvement for amateur swing speeds, but it will probably just be a yard or two gain over G30, which is what I found in my Trackman session.

If you have an older Ping driver then you could notice a bigger jump as Ping say the aerodynamics of the G driver at 460cc are equivalent to G25 at 197cc. Therefore you are getting more forgiveness from a larger head for the same speed through the air.

This is where the new G driver design makes the difference as the larger head with a higher MOI of 5412 g/cm2 means more forgiveness at a higher speed.

The new Alta shaft designed by Ping has a tip 0.025 inches narrower at 0.325 inches to make it more aerodynamic. It also features their traditionally higher kick point to enable them to have a slightly heavier head to help with the forgiveness.

However this does not make a heavier club as the whole thing tips the scales at around 310 grams depending on the shaft you use.

As well as the better looks, the Ping G driver also feels and sounds better than the G30 with a much richer sound that is not as harsh. The flight was medium-high and just the right level of penetration once you had been fitted for the right initial loft, which can then be adjusted up or down 0.6° or 1° using the adjustable hosel.

The 1° change is represented by the bigger dash and using the smaller dash setting will affect the lie more so you will need to work with a fitter to find what is best for you.

Visually the enhancements to the Ping driver are significant and the aerodynamic and design improvements create some measureable marginal gains, which when aggregated create a driver that is a decent step up from the G30 and a big leap forward if you have an older model.

With the G30 being in the top two sellers in the UK for most of its life, then the G driver has large shoes to fill, but should manage this easily.

As before, Ping has also brought out an SF or Straight Flight version of the G driver. This comes in 10° and 12° versions with the sole weight slight more towards the heel of the club to create a slight draw bias to straighten up those fades.

To help the club turnover more easily it is also a D1 swing weight, two points lighter than the standard version.

Visually at address it was just as good and that is the great thing about the SF. It creates the draw effect without using offset or any other technique that is visible at address to you or anyone else.

Compared to the standard version on Trackman, it actually went a little further, possibly due to the 10° loft being slightly stronger than the 10.5°.

However it was much more accurate for me, with a tighter dispersion of shots in the centre to left of the fairway instead of the centre to right. Ping says it creates around 12 yards of left correction to your shots and that would be about right in my experience.

In my review of the G30 driver I said I preferred the SF TEC because it was even easier to hit. This is not a high handicappers or slashers club. This is for everyone who doesn’t hook it regardless of ability so go for a fitting and see if it works for you. If it does, put it in the bag and no-one will ever know!

Finally as before there is the Low Spin or LS TEC version that is the same head but with the weight in the sole and internally adjusted to create a lower spinning club.

Ping say this should reduce spin by 400rpm, but for me it was more in the 200 rpm range with the 10.5° head as you can see from the Trackman stats above. However what is really noticeable is the dispersion.

What is kept quiet is that the internal weighting places more weight forward and in the toe of the club and this creates an anti-left driver that saw most of my shots head towards the right side of the range.

It does sound and feel a little different too, but really your decision to use the LS TEC should be based on performance as for those with high swing speeds, high spin deliveries or a raging hook may find that this version of the G driver could be the answer.

However the standard G driver and the SF TEC version will suit many people so well that the LS TEC will be more of a niche offering.