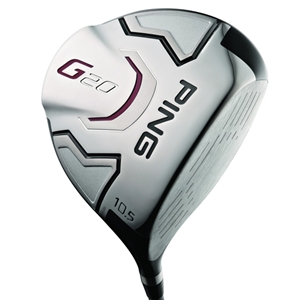 Ping G20 Driver Review -The Ping G20 driver has a slightly wider face than the G15 and at address the head appears bigger, although not quite as large as the K15. This is achieved by a shallower crown and also visually by a lighter metallic silver finish.

It’s interesting that Ping have moved away from black to something slightly lighter. It does look very good but for us is certainly a little more reflective in bright conditions when compared to the previous black colour.

The size and shape of the longer head look much better than the G15 and the sound and feel at impact were excellent and the ball took off on a slightly higher but more penetrating trajectory than the G15. The G20 driver also comes with Ping’s own TFC 169D shaft that seems a little more stable than in the past thanks to the higher kick point and feels quite powerful.

There is also a Tour version of the shaft that will give you a lower trajectory and this will be excellent for those with higher swing speeds, so make sure you get custom fitted as the combination of shaft and loft will be important.

We really liked the G20 driver and the enhancements are all excellent and we think it is the best Ping driver since the G5 so it is well worth checking it out.

Following Bubba Watson’s victory at the 2012 Masters, using a Pink G20 Driver, Ping announced that 5000 limited edition Pink G20s would be available with proceeds going to Bubba Watson charities. We’ve not seen a Pink G20 in the flesh but given the small numbers and large demand if you get one keep hold of it!