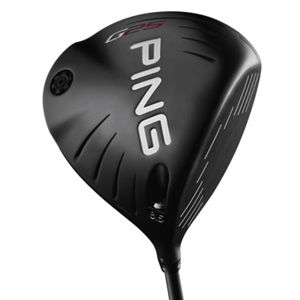 Ping G25 Driver Review – The Ping G25 driver is the next evolution of Ping G range of drivers, but as with all products that are the number 1 sellers in the market, it can leave you with the conundrum of how you can continue to evolve it without messing with the formula that made it so successful in the first place.

Ping have added adjustability the the G25 driver for the first time and this is a good thing. When Ping added adjustability to the Anser driver, the designers were under strict instructions not to change the shape or internal dynamics of the head. They managed this and came up with Ping’s adjustbale hosel that weighs the same as the previous one and this now appears in the G25 driver.

The hosel works on the principle of locking the shaft in place through contours on the shaft tip rather than grooves and it can sometimes be a little stiff to remove the head because of this. However as it is only 0.5 degrees up or down it is more of a fine tuning option to help bridge the gaps between all the various head lofts to give you the trajectory that suits you the best.

There are some sublte changes to the head shape of the G25 driver from the G20 driver. It is slightly longer front to back and now looks a fraction triangular. It is also taller at the face and the sole weight at the back is less pronounced and not as tall. These are all small changes to improve the performance of the club, but unfortunately it does not do much for the sound which as a result of the new shape is a little more piercing than before.

The driver sits well at address and even though it seems to want to fall open when you ground it, it does stay square. This could be because the more subtle shaping around the sole weight allows the camber of the sole to work with the adjustable hosel as the change in loft changes the lie fractionally.

The Ping G25 driver still gives you all the forgiveness you are used to from their G drivers. The trajectory of the G25 driver was similar to the G20 and the flight was maybe a little stronger. The G25 comes with a very good TFC189 shaft that is the same weight as the previous TFC169 at 58 grams in the stiff flex we tried. It’s stability seemed good although for some reason it did feel a little heavier when swinging the club even though everything else is the same.

Visually the charcoal finish looks good and you could be forgiven for thinking you had picked up a ‘lite’ version of the Ping Anser driver. And that is the issue with the G25 driver. The Anser will cost you more, but it has the same adjustability in a driver that sounds, feel and goes better. So start saving.