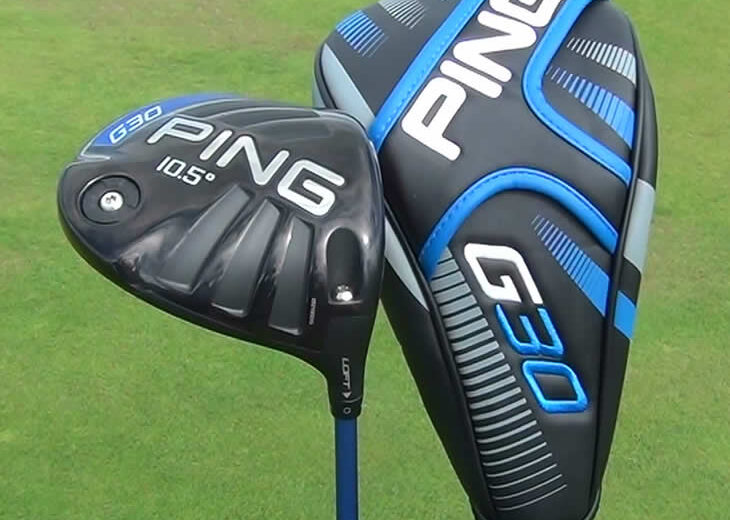 Ping G30, SF Tec & LS Tec Driver Review – Once again Ping has had to wrestle with the issue of improving one of the best selling drivers in the market. The Ping G30 driver is the 7th incarnation of the range that started with the market leading Ping G2 driver six years ago. 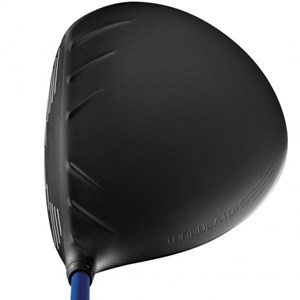 The standout feature of the G30 driver visually and technically is the Turbulators that sit on the crown of the club. These are aerodynamic fins, whose name has to be spoken in movie trailer voiceover style, that smooth the airflow over the club during the swing to increase the club head speed.

For years you would have believed that the smoother the surface and curves of a clubhead, the faster it would go. However like dimples on the golf ball, the Turbulators claim to smooth the airflow rather than disrupt it as the Wind Tunnel Testing video below this review shows.

This is all well and good in a wind tunnel, but will it work on a golf course?

I took the G30 down to our driving range, that felt like a wind tunnel at times, to put it through its paces against the previous Ping G25 driver.

With the help of Olly, a PGA Professional from The Leading Edge , we hit each club to get an average speed using Trackman and the results were very interesting. With the G25 driver the average club head speed was 105.5 mph, but with the G30 driver the average rose to 106.5 mph.

Now 1 mph may not get you leaping up and down in joy, but each 1 mph usually equates to around 4 yards carry, or about half a club less into the green for your second shot.

The faster you swing it, the greater the gain as Bubba Watson added an extra 2 mph to his 118.5 mph swing speed for an extra 10 yards, as the Bubba Longer video below shows. On the flip side, given that most amateurs who will buy this club are likely to be in the 85-100 mph range, then the gains may not be as visible on the course as you would expect.

However, it is a gain and we like it when manufacturers make an improvement in technology that has a demonstrable change in performance, so well done Ping.

The other major change from the G25 is the Trajectory Tuning + adjustable hosel that has double the number of loft options. As well as the +/- 1° option that the G25 had, the G30 also has a +/- 0.6° option so that you can fine tune your trajectory a little bit more. I like this as it can make up for any slight variation in the actual loft of the 9° or 10.5° heads during the manufacturing process.

The increment of 0.6° does seem a bit odd as usually these increments are in round half degrees, but remember what I said about keeping a winning formula? One of the conditions Ping’s designers work to is that the adjustable hosel must not weigh more than a non-adjustable hosel to keep the balance of the head the same, as Marty Jertson of Ping told me:

One thing we’ve really learned with studying the aerodynamics is that the size or diameter of the hosel is very crucial to the air flow. So for us, keeping the outer diameter the same as our traditional fixed hosel designs was very important, so we didn’t have move the centre of gravity nearer the heel whilst allowing us to keep the hosel and shaft area of the head very aerodynamic.

Due to the geometry of the five options on the hosel, Ping say that at the G30’s 72° shaft lie angle, the mid point for a range of 1° loft change loft turned out to be 0.6°, so there you have it.

Despite this, the adjustable process is easy to understand and use as the hosel is clearly marked and I would recommend going through a fitting process before you order the driver and also after it arrives to ensure you have it optimised for you.

At address the driver looked good and after a few shots you forget about the Turbulators on top of the matt black crown. Ping claim the Turbulators help frame the ball at address, but I think that’s stretching it a touch. Maybe if they were a different colour they might, but that would probably affect the aesthetics more.

The G30 driver seemed to want to sit open at address a little more than the G25, especially when you moved it to the 1° open setting, so if you like your drivers like that then you will love the G30.

There is also a new blue TFC 419D shaft that has a higher balance point to keep the swing weight the same for the fractionally heavier G30 head. The extra 1 gram of weight helps with increasing the Moment of Intertia (MOI) as the G30 is still a very forgiving driver right across the face.

For those with stronger swing speeds there is also a choice of Tour 65 or Tour 80 shafts that have a bit less torque and come in a classy shiny silver finish that looks like a steel shaft.

Whilst on the subject of looks, the G30 comes with a royal blue paint job, which not only seems to be the colour of the moment, but also harks back to the blue flashes on the original G2. It looks good without turning a lot of heads, but that is classic Ping understated style.

The sole weight on the G30 is also larger on the sole than the G25 and this combines with changes in the internal weighting to move the centre of gravity lower and further back on the optimum axis.

Overall I liked the Ping G30 driver and the Turbulators are a worthy improvement and the extra adjustability gives you more flexibility. The sound at impact is similar to the G25, so that makes it quite noisy, but thankfully on the right side of being too much.

Despite all this I can’t recommend it because there is a better driver that was launched at the same time.

It’s called the Ping G30 SF Tec with the SF standing for Straight Flight. This is essentially the same club but the weight on the sole is move towards the heel of the club to slow it down and allow the toe to overtake it and create a little draw spin to straighten out all those fades most amateurs hit.

The SF Tec set up is effectively the same solution as having an offset driver, but it looks like a normal club. Compared to the standard G30 the sole weight makes it sit better at address and the different internal set up makes it sound better too with a more solid strike.

However it is in the performance that it really shone. I was expecting a big draw from this, but it actually just went straight, like the name says. Several Golfalot testers tried it, including some habitual drawers of the ball and we all found it went pretty straight.

The SF Tec head is 2 grams lighter than the standard version and comes in 2 lofts of 10° and 12°. Using the adjustable hosel you could de-loft the club and open the face to counter some of the draw bias if it did prove too much.

It was so much fun to hit that for me, the SF Tec G30 driver with the shiny Tour shaft is the one to choose, but of course go through a fitting first as sometimes what you want and what you need are different things.

In February 2015 another version was released called the Ping G30 LS Tec with the LS standing for Low Spin. This will replace the Ping i25 driver as the better player model, with the ‘i’ woods taking a break from the Ping range for now.

No prizes for guessing the differences with the LS Tec, as the sole weight has been moved forward by around 1.5cm to move the CG forward, which in turn lowers the spin.

Aside from the brushed steel surround to the sole weight, the other visual changes are a matte black finish on the sole instead of gloss and the loft number has been moved from under the Ping logo to just below the adjustable hosel screw.

This is a driver for higher swing speed players, as the standard model is probably a little spinny for these faster swingers. Claims like these have to be tested and thanks to Ping’s adjustable hosel I could try both 10.5° heads with the same silver Tour 65 stiff shaft to make it a fair contest.

This shaft is probably ideal for higher speed players as it is just a little firmer with a lower torque and for me the G30 LS Tec span around 150 rpm less at a 100mph swing speed, which is within the ‘up to 400 rpm’ range that Ping are claiming.

Of course this will vary according to different players, but the lower flight and spin of the LS Tec version at least enables them to get all the forgiveness benefits of the excellent G30 head in a more playable set-up.

Other than the spin the only other difference was the slightly lower, more muted sound that the LS Tec had compared to the standard G30. This is due to the different weight position affecting the acoustics and I actually think it is a plus point.

Given the target market, the G30 LS Tec only comes in 9.5° and 10.5° lofts, but with the adjustable hosel and choice of 3 shafts, your local Ping fitter has plenty of scope to get the best launch conditions for your swing.

Whichever G30 driver you go for, you will be rewarded with one of the best drivers on the market and you also get to say ‘Turbulators’ in movie trailer voice whenever anyone asks what the fins are for, which will never lose its appeal.