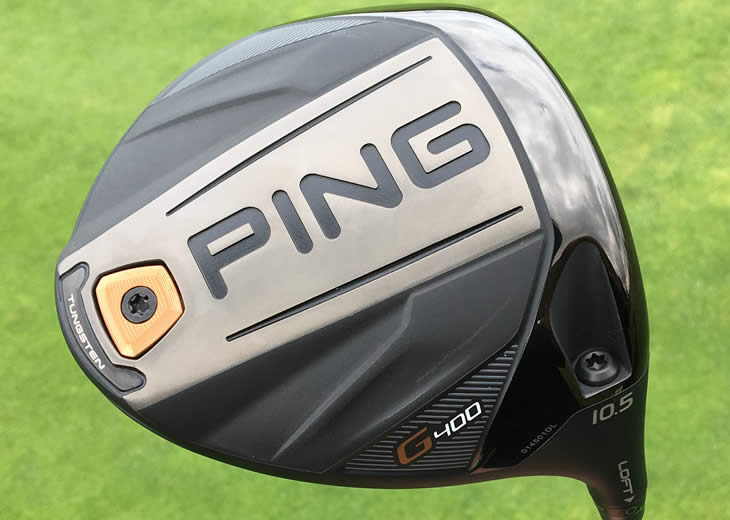 Ping G400 Driver Review – Like most brands, Ping try to get the CG of their drivers as low and far back as they can to make them as forgiving as possible and so far they are the most successful at doing this according to most of the stats I see.

The easy way for me to review the Ping G400 driver is to say that they have managed to go deeper and lower again, but of course there is more to it than that. 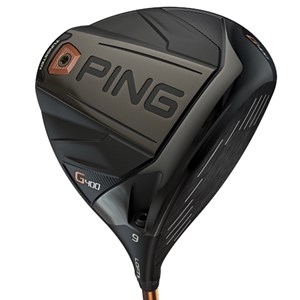 To get the CG lower and back you need to take out weight above where the ball impacts the face and they have done this in part by reducing the crown to 0.43mm at its thinnest points.

This is in between the ribs of the Dragonfly design crown that now has an ‘Infinity Edge’ to it as the rim that was around the back on the previous G Driver has been smoothed out.

The overall shape of the G400 head is also a little more rounded at the back than the G and the whole package looks better at address.

Also on the rear of the crown are some little dots that you can feel and you think might have some aerodynamic benefit, but I am afraid they are just cosmetic.

What does have an aerodynamic benefit are the Turbulators on the front of the crown that are there to reduce friction as the air goes over the head in order to speed it up.

These are now chunkier than they were before to have a little more effect and there are some technical images from wind tunnels that I have seen that show this. On this size of head they are growing on me more than on the smaller heads of the G400 fairway and G400 hybrid and I think visually they combine well with the Dragonfly design to give a subtle, contoured style.

Smaller heads move faster through the air than larger ones and according to Ping’s numbers, the 445cc G400 driver is as aerodynamic as the G30 driver shrunk to 295cc, so that is a big improvement in two generations.

The other weight saver is the T9S+ Titanium Forged Face that is 6% thinner can therefore flex 16% more to increase ball speed by 1.2mph at a 105 mph swing speed.

With my slightly slower 100 mph swing on GC2 I was seeing about the same ball speed on a 10.5° head compared to the previous G Driver.

However the launch was up 0.8°, the peak height was up 4 yards and the descent angle was up 3°. However do not be alarmed because this is the design philosophy of all the G400 range to launch it higher with more ball speed to use that deeper CG for more forgiveness and the thinner face and crown to deflect more at impact to add launch.

Now clearly this is not working for me at 10.5°, so I used the Trajectory Tuning Technology 2.0 adjustable hosel (where would we be without three word technologies) to adjust the loft down 0.6° and then 1° on both clubs.

With the smaller change at effectively 9.9° I ran into the same issue, but at full adjustability of 9.5° the distance gains really kicked in as the straight flight delivered more ball speed, with less spin on the same launch as the G 10.5° but with a higher flight.

Essentially by de-lofting, the straighter face adds ball speed with less spin and the deeper CG increases the MOI and combines with the thinner crown and face which is deflecting more to add to the launch angle. Simples.

This could be too much information, but this is how these hosels work in every head as the change in loft also affects lie as the shaft receptor in the hosel is not bored straight in order to make the loft adjustable. This is entirely subjective, but for me I preferred the change in lie when I adjusted the loft away from ‘neutral’ for no other reason than it felt better.

So you can see here how playing with the initial head loft of 9° or 10.5° and the adjustable hosel to get the right launch conditions is the key to the G400 and that by having a higher launch, you can do down a little in loft that has the benefit of increasing ball speed, without losing forgiveness and possibly gaining some accuracy.

With both the last two models the delofting required has probably been minimal, but I would guess that if you have a G30 driver or older then you could be looking at coming down a degree or more in head loft and a Ping fitter can help you with this.

The deeper CG comes from the tungsten weight that is placed behind the gold screw weight that Ping use to modify the head weight during their custom fitting process.

The G400 gold weight is made from a 30% denser material than the previous G sole weight and as a result it is smaller and looks better too.

Like before there is also a G400 SF Tec option that uses Straight Flight Technology (more TWT) where the tungsten weight moves from the back of the sole towards the heel in order combined with a lighter D0 swing weight and allow the face to square more easily for those of us who have a little leakage to the right.

Available in 10° and 12° the SFT was first introduced in the G30 and I felt it was a really good option and it has been good to see that it has grown to become the biggest selling head option in the G driver range and I expect that to continue with the G400.

At the other end of the scale is the low spin LS Tec where the tungsten is moved forward in front of the gold weight to lose around 300 rpm spin from the 8.5° and 10° heads.

So as you can see there are a lot of loft and head options as well as two different lengths of the counterbalanced Alta CB shaft.

The standard length is 45.75 inches, but there is also a ‘Tour Length’ 45.25 inch shaft which may suit more golfers for better accuracy. Both come in a copper colour that morphs into black as you put the club down at address, which is a cool feature on this and all the other G400 woods.

However I have saved the best bit for last, because the Ping G400 is the best sounding and feeling G driver Ping has done for a while, quite possibly back even to the G2 and G5. It is a much lower pitched, richer sound that makes this one of the best sounding drivers in the market.

This has been achieved by using the same Dragonfly ribs on the inside of the head to not only provide additional stability, but also to modify the sound to caress your ears as you blast one into the atmosphere.

Every Ping G driver is good, a little bit better than the last through solid engineering, but with the improvement in looks and sound, the Ping G400 should go down as one of their best, so check it out.