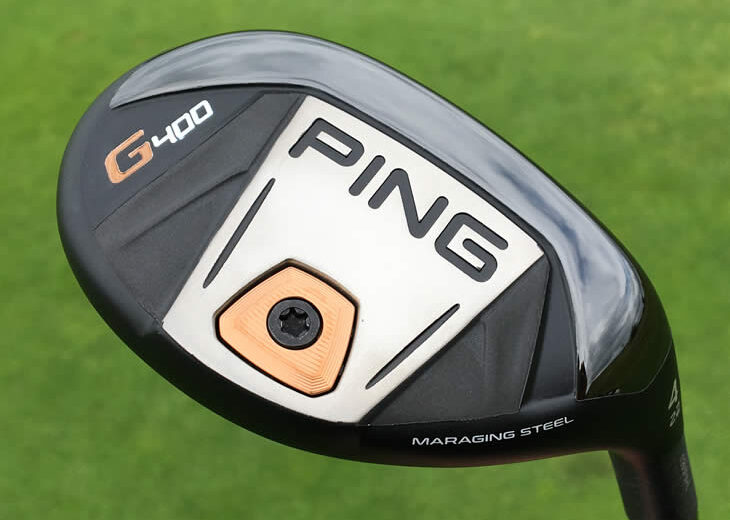 Ping G400 Hybrid Review – The Ping G400 hybrid is an improved version of the previous G Hybrid set up for higher launch with more forgiveness.

The aim of hybrids is to launch the ball higher than an iron with an easier to hit head so that it lands steeply enough to stop on the green and the G400 hybrid does all this. 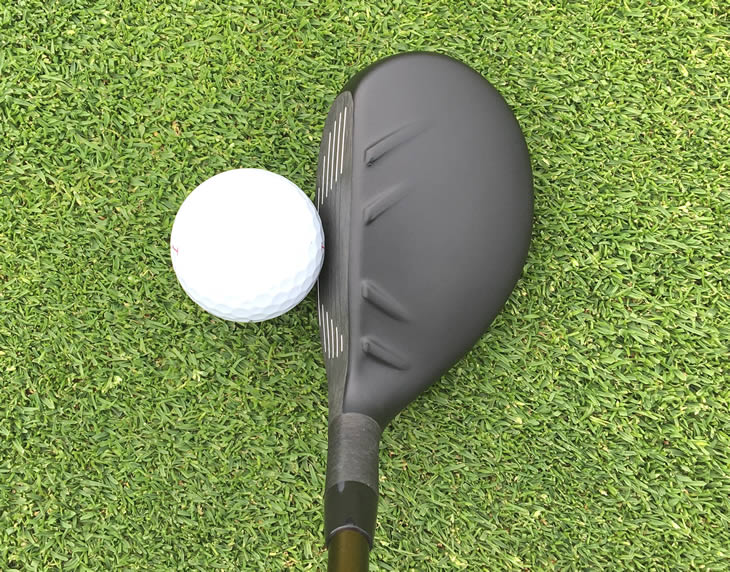 The head is a little more rounded at address than the G hybrid and the Turbulators have been made larger on the crown.

These don’t really have any aerodynamic benefit in a head this size and are there to match in with the looks of the G400 driver and ‘frame the ball at address’.

It’s not really my style and for alignment I think the white and black groove lines do a good enough job and the slightly rougher face texture works with them to reduce spin.

The G400 sole features a smaller gold rear weight than before because it is made from a 30% denser material and whilst it is removeable, it is more for the Ping fitters to use so no fiddling!

The technical changes are staring at you from the face as it is now a Maraging Steel one that is 11% thinner, 10% lighter, yet strong enought to flex 35% more at impact for a claimed extra 1.5 mph ball speed.

Its the first time Ping has put a Maraging Steel face in a hybrid and combined with a 0.48mm thin 17-4 Stainless Steel crown, it allows them to save weight up top that can be positioned lower and further back in the sole to increase that launch and forgiveness.

The overall depth of the head is good and not as low profile as the G400 fairway seems to be, so this will suit all levels of player.

The Ping G400 hybrid comes in a range of lofts from a 17° 2H to a 30° 6H and I tested the 22° 4H against the same loft in the previous model on GCS with ProV1x balls to see if the changes have made any difference.

The faster face did deliver an extra 1mph ball speed for me and a slightly higher launch that also lead to a steeper landing angle, so if you struggle to get enough height or stop on your hybrids then the G400 could be the answer.

My spin was higher but that is probably more to do with the number of fades, which could in turn be due to the shaft not being as good for me as the previous Alta on the G hybrid.

The G400 comes with an Alta CB that is counterbalanced (hence the CB) and I actua prefer it as it feels lighter and a bit more responsive.

It also transforms from the copper colour when you pick it up to a darker black shade when you put it down at address which is a pretty cool feature.

The sound and feel at impact was as good and maybe a little better than the G Hybrid and all in all this is a very competent hybrid even if the looks don’t get the heart racing.

It will suit all levels of player as the lower lofted 2 and 3 versions have more toe weighting on the inside in order to slow the toe down and stop the club going left for better players who want a straighter hybrid instead of the iron style G400 Crossover.