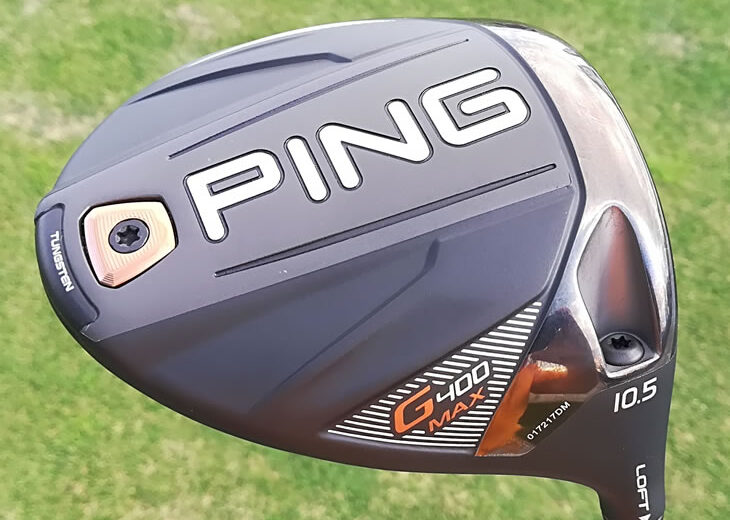 Ping G400 Max Driver Review – Just 6 months prior to the Ping G400 Max driver launch came the Ping G400 driver which increased forgiveness whilst improving sound and I felt it was one of the best drivers Ping had done in a while.One of the things they subtly dropped into that release without much fanfare was that the head is only 445cc, but that didn’t seem to matter much as it is the configuration of the head that really determines the shape rather than the volume. 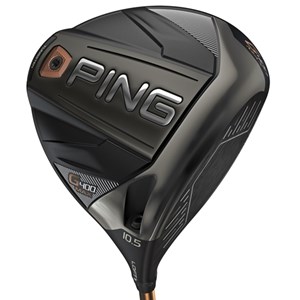 However whether it is a re-active or pre-planned launch, Ping has now brought out a 460cc version called the G400 Max driver.

Obviously this looks bigger at address and even though the G400 is perfectly fine, when you put the Max next to it you see what you have been missing.

The larger footprint is one I usually prefer and the deeper head is more similar in size to the previous Ping G driver.

As a result things like the Turbulator on the crown are a little bigger too, possibly to make up for the fact that this is a bigger head moving through the air.

Normally the rule of thumb is that bigger heads will give you more MOI, whereas smaller heads should go through the air quicker as there is less of them and that is your trade off.

Therefore making the Turbulators bigger to offset the larger head could be the answer to this, but given having them on at all made only a couple of miles an hour difference at over 100mph swing speed, then increasing them a little them on a 15cc larger head probably just balances everything out.

Ping did major on their aerodynamic Vortec slot on the back of the G400 head and whilst I heard less positive responses on its effect from other experts (but they would say that) for whatever reason it is now gone on the G400 Max.

Probably this is because Ping wanted to get the CG low and back and therefore the copper weight sits in front of a 16g high density tungsten weight that curves behind it and is twice as heavy as the one in the G400.

In this deeper position, it really increases the combined vertical and horizontal MOI of the Ping G400 Max drive to 9900 g/cm2 which is very high for a mainstream driver, not that the G400 is that far behind at over 9000 g/cm2.

The adjustable hosel and stock shaft options are the same as before, so I went through the shafts on both heads to optimise them and as with the G400, delofting the 10.5° head to 9.5° gave the best results for me.

I preferred this as it also drops the lie from 59° in standard setting to 57.8° and even with the face being open, it still looked reasonably square at address.

For me with my 102 mph swing the X Torsion shaft was the best in the G400 and this is the same colour as the standard Alta CB, or colours I should say, as the copper shaft morphs to black as you put the club down at address. As ever it is a three word tech, so the technical name is Colour-shifting Paint Technology, but whatever you call it, it’s pretty cool.

For the G400 Max is was the lighter Alta CB, or Counter Balanced, shaft that was the best as it allows Ping to add in a 55g shaft to a heavier head to improve the MOI as it does in the G400.

Taking them both on GC2 with Pro V1x balls and you could see the numbers highlighting the difference between the two models. The G400 spins a little less and had a lower flight, but the most noticeable difference was the sound of the G400 Max, which was much louder and hollower than the standard version.

Something between the two sound wise would probably be better, but I would still take the Max because it looked more appealing at address and was easier to get going. As the numbers suggest, the flight was visually a littler higher too and the extra MOI did seem to give the head an even better balance.

As long as you keep the spin down with the choice shaft and/or loft then the higher launch of the G400 Max should equal or surpass the performance of the G400 for most people in most cases and Ping’s custom fitting service can find this out for you.

Whilst the average offline numbers shows a win for the Max, in reality the offline numbers were quite similar and it was really a general feel of more forgiveness that I preferred in the G400 Max as the distance held up slightly better on off-centre hits.

All the other G400 models continue so the SF Tec with its lighter swingweight and draw bias could still be an option for those for whom the G400 Max does not straighten things up enough. The G400 and G400 LS Tec are for those higher swing speed players who need to reduce spin and have enough speed to cope with the lower launch.

However all thing being equal, I am not sure why you would go for the standard model any more, as even if the performance was similar, the look and higher MOI of the G400 Max means it is the obvious choice to go for provided the launch conditions suit you.

This is where the Max name takes on a new role as in the past it has been the suffix for Ping’s super game improvement clubs like the GMax irons. However the G400 Max driver is for all levels of players as its usage on Tour shows, so the Max here refers to the maximum dimensions.

If you already have a G400, you might be feeling a bit miffed, but if it works for you then it might be a touch less forgiving than the Max, but it is still ahead of most of the rest of the competition so I wouldn’t be too upset if you feel you are missing out.

If you are in the market for an all round driver that focuses on forgiveness then the G400 Max is the Ping driver to go for. It does make you wonder why they didn’t do the G400 Max first time around as at this price it is going to be tough to beat when compared to all these super adjustable premium drivers.