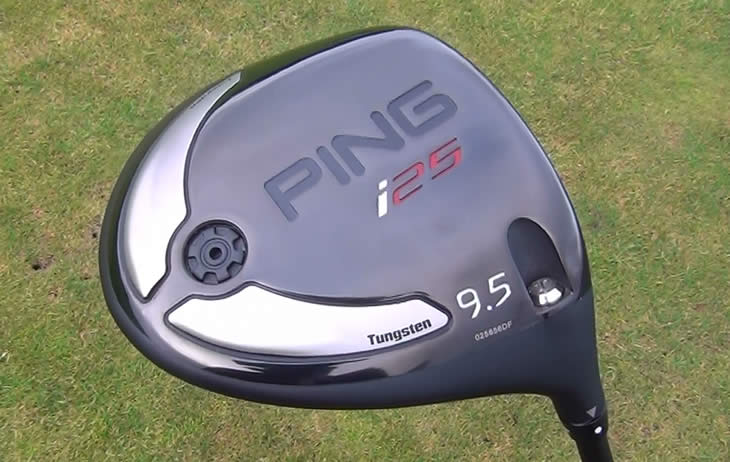 Ping i25 Driver Review – At first glance the changes between the Ping i25 driver and the previous Ping i20 driver seem to be quite small, but this masks some big differences.

The 460cc head has been tweaked a little to make the centre-back portion of the crown a little lower to move the weight lower and further back for a lower centre of gravity (CG) and lower spin, but you have to look quite closely to see this. To help with the low and back CG the high density tungsten weights on the sole are a little larger than before and the addition of a screw weight also helps. 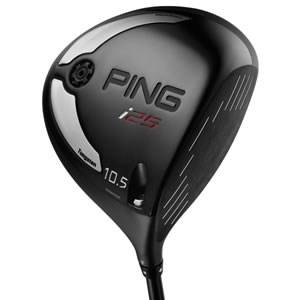 This makes the i25 driver more forgiving than the i20 as well as reducing the spin you put on the ball. In our tests on a Flightscope with our friends at Leading Edge the spin was similar, but the launch angle was a degree lower and the ball speed increased by 5mph to give around 10 yards more carry than the previous model at a clubhead speed of 98mph.

What was also noticeable was that the flight was a little lower and more penetrating than the i20 so you can see the effect of the lower spin and better launch conditions.

There are 3 different head lofts of 8.5°, 9.5° and 10.5° and for the first time in the i-range, you can use Ping’s adjustable hosel to fine tune the loft by half a degree up or down. This is a pretty small adjustment and the benefits are hardly noticeable to the naked eye, but in a proper Ping fitting session then these half degree increments will be useful for getting the launch conditions of your i25 driver as close as possible to the optimum.

At address the main change you will notice is the ‘racing stripe’ alignment lines on the matt black crown that reminds you of the classic paint job on a Ford GT40 or AC Cobra. The idea is that they help you line up the sweetspot on the head with the ball, a bit like you do with putters. This should then give you more centre hits and therefore the best launch conditions and accuracy.

It obviously makes sense and when I was testing it I did find myself using the lines a lot to get the correct ball position, which is unusual as in the past I have not felt a great need to use alignment aids, preferring to use the markings on the face.

The best think about the lines is the fact that their understated looks are almost embedded in the finish of the head so they are there if you want to use them, or you can easily ignore them, or just admire them as a form of tribute motor art.

The i25 driver felt a little lighter to swing than its predecessor and had a louder sound that was quite high pitched, but not as noisy as the G25 driver. If anything the looks and performance are probably closer to the Ping Anser driver, which is one of the best recent Ping models.

Ping tend to use their own stock shafts and taking over from the TFC range, we now have the PWR range that stands for Performance, Weighting and Responsiveness. I tried the PWR65 shaft and it did indeed perform well with good resposiveness. It felt a little lighter than the TFC707 in the i20, but there are 3 different weights available, so again some custom fitting will get the right balance of shaft weight and loft for you.

Overall, the Ping i25 driver is a more forgiving version of the i20 and actually there is some crossover with the Ping G25 river, as single figure to low teen handicaps could feasibly use either club depending on how much spin they put on the ball with their swing.

The i25 driver certainly looks a more classic shape than the G25 and the racing stripes on the crown give it a distinctive look and one which I am sure we will see on all Ping drivers soon. The performance and adjustability is up there with the Anser driver, but without the price tag, so all in all the Ping i25 is a worthy successor and should be on the list for better players.