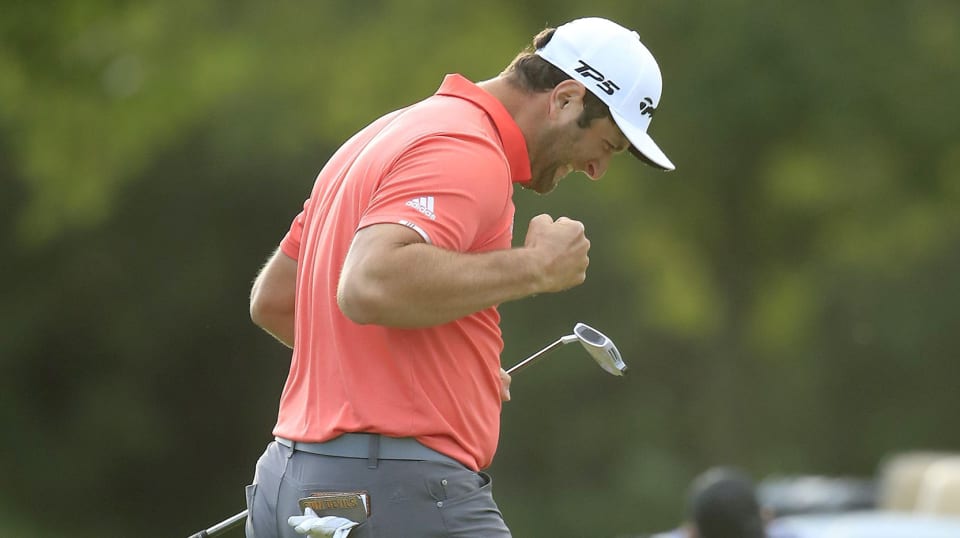 Jon Rahm comes from behind with a 66-64 weekend, then makes a crazy, trans-continental putt to beat Dustin Johnson in a playoff and win the BMW Championship at vexing Olympia Fields.

It’s the second victory in six weeks for Rahm, who overcame a bizarre Rules gaffe in the third round. He vaulted to second in the FedExCup heading into this week’s TOUR Championship to decide it all, and after his recent victory at the Memorial Tournament presented by Nationwide becomes the one to watch on really hard golf courses.

Welcome to the Monday Finish.

1. He made a great bogey. Rahm’s biggest hiccup of the weekend was when he picked up his ball before marking it on the fifth hole of his third round Saturday, incurring a one-stroke penalty. It was a rare brain-cramp, but he made his 6-footer for bogey and didn’t look back.

“I don’t know if I would have won had it not happened,” he said. “It kind of made me mad at myself, and I just went on with my focus after that and was able to play amazing golf and stayed aggressive. … I can tell you after that two-putt, making that 6-footer for bogey, I was like, OK, that’s it, no playing around, go. That’s kind of what mentally did it for me.”

In the past, Rahm might have blown his top at making such a mental error. Not this time.

Jason Day, who had been on a hot streak, finished 14 over, while countryman Marc Leishman finished 30 over. Rahm, though, likes it hard; six weeks earlier, he had tamed a similarly difficult but windier Muirfield Village course to win the Memorial Tournament presented by Nationwide.

“The way I played today was so solid,” Rahm said. “I only missed two fairways in 18 holes, hitting mostly drivers. Only missed actually one green in 19 holes that I played today, gave myself plenty of chances, never really stressed for pars.

“This round was about as well as I think it could have gone,” he added. “Probably overall as a weekend, I think this one might have been a little bit better (than the Memorial).”

3. He waited for his A game. After a 5-over 75 in the first round Rahm was eight behind first-round leader Hideki Matsuyama, and he was still seven behind 36-hole leaders Patrick Cantlay and Rory McIlroy after a second-round 71. It wasn’t until Rahm’s third-round 66, which got him back to 2 over, that he looked like he might have a shot at winning.

“Thursday I really struggled off the tee, never got comfortable really with any part of my game,” he said. “Friday I was playing pretty similar. Let’s just say for people that don’t know, Thursday and Friday played significantly more difficult than the weekend did. I mean, those greens were really firm, fast and the wind was blowing a lot harder than it did the last two days …

“It is true,” he added, “after Friday I went to the range and figured some things out, just got comfortable. I knew it wasn’t too far away, slowly got better each day, figured it out, came out on Saturday and played really good golf and just kept it going today.”