SCOTTSDALE, Ariz. – Jon Rahm left the football jersey at home, but “Rahmbo” still made an appearance during the opening round of the Waste Management Phoenix Open.

The former standout at nearby Arizona State has donned a Sun Devil football jersey on the 16th hole in each of his prior two tournament appearances, but this time he opted for a bandana emblazoned with his nickname. He stuffed his tee shot inside 12 feet, then made the putt for just his second career birdie on the hole.

“I’ve heard a lot of nicknames in the last year, and ‘Rahmbo’ is the one I’ve always loved and always tried to encourage,” Rahm said. “I put the shirt on before, and I feel like it kind of gets lost with the (No.) 42 from Pat Tillman on there, so I just kind of wanted to promote the nickname.”

Rahm was slow out of the gates at TPC Scottsdale after being dealt a pair of bad breaks. His layup shot on the par-5 15th hole ended up in a divot, while his wedge approach to No. 2 hit playing partner Xander Schauffele’s ball on the fly and bounced away from the hole.

But the world No. 2 turned things around with an eagle on the par-5 third hole, and after a 4-under 67 he sits just one shot off the early pace.

“I was kind of waiting for something to happen,” Rahm said. “I don’t think I missed a single shot after that eagle. I think that every single shot was as pure as I can hit it.”

Rahm explained that he had hoped to have a red bandana like the one featured in the “Rambo” movie series starring Sylvester Stallone, but he had to settle for white because it was the only color that could accommodate a TaylorMade logo on the side.

“That way I felt like it’s the way Rambo actually had it,” Rahm said. “So hopefully it helped, and I can keep making birdies on that hole.” 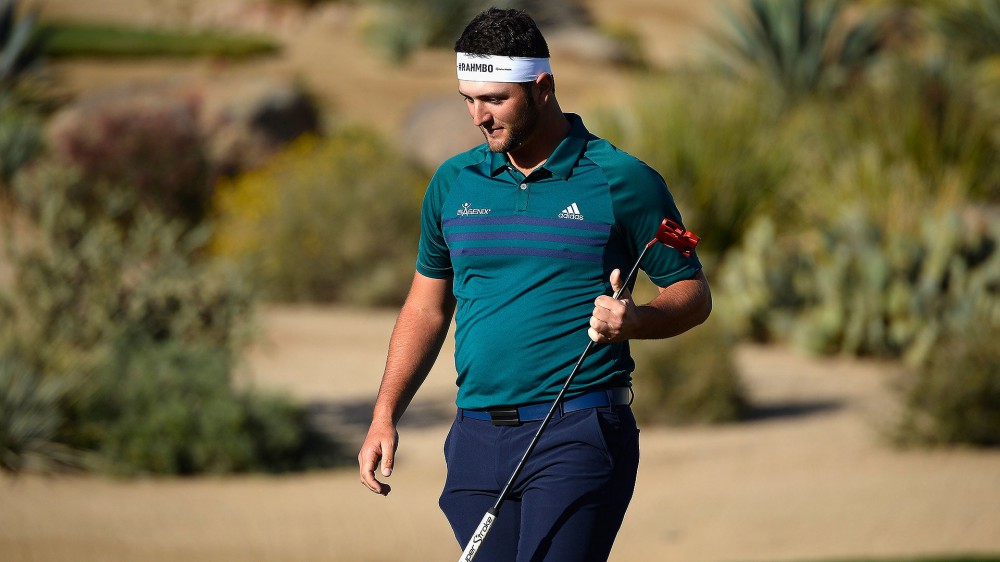 Caddie, wife go all in on horse racing

After playoff loss, Kisner-Brown back in contention