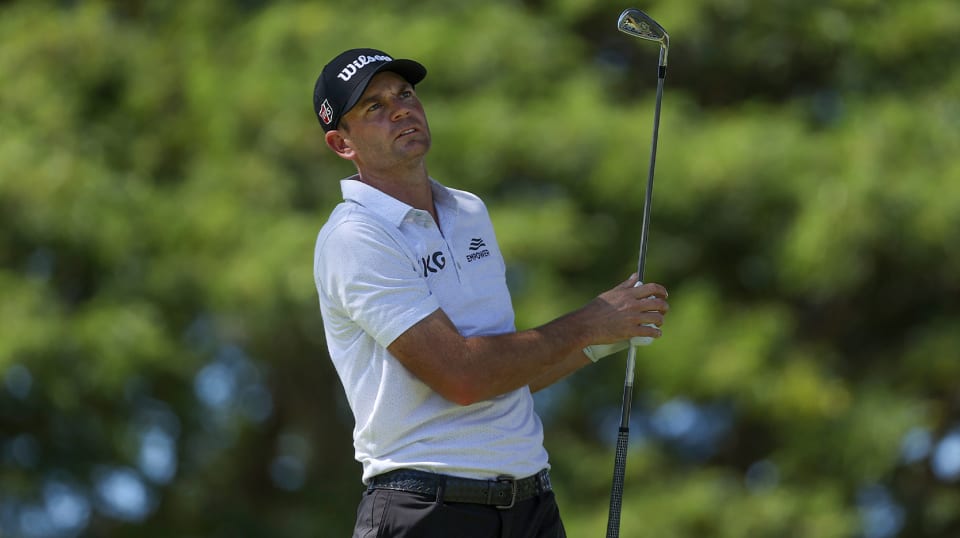 HONOLULU, Hawaii – Brendan Steele, Joaquin Niemann and Kevin Na can all smell a little redemption as they gear up for the final round of the Sony Open in Hawaii. But they can’t all have it.

The trio each have demons to bury at Waialae Country Club on Sunday and are in great position to do so. Steele and Na produced stunning 9-under 61s, while Niemann posted a 63 in Saturday’s third round to become the players to beat.

Steele has a two-shot lead at 18 under with Niemann and Na sharing second at 16 under. They won’t be the only ones with a shot as five players share fourth at 15 under and four are just a shot further back at 14 under.

But they’ll start Sunday with the best chance.

Steele has demons from a year ago, Niemann has his from a week ago, while Na has them from the last two years.

Steele lost to Cameron Smith 12 months ago in a playoff – a result that still stings given he had a two-shot lead with two holes to play. On that day he bogeyed the 17th and then as Smith made birdie, Steele produced a wild hook from the fairway on 18 that made making the necessary birdie to win near impossible.

After Smith drove his ball in the playoff into the rough, Steele looked in great shape in the fairway, but Smith punched a beautiful shot to 10 feet forcing him to go flag hunting. His wedge sailed over the green and when he failed to get up and down, it was an easy two-putt win for the Australian.

“You hope that you come back and you play well and erase whatever negative memories there are, but all the memories are pretty positive. Playing great here last year was good, and I’m excited for the challenge tomorrow,” Steele said. “I know it’s going to be really tough. Guys are coming after me. But I’ll just do my best and hopefully it will be enough.”

Steele kept a positive demeanor despite being asked about his failure a year ago multiple times. But the three-time TOUR winner admitted to getting a little annoyed earlier in the week. The last player to win a tournament after losing it in a playoff a year earlier was Ryuji Imada at the 2008 Atlanta Classic.

“The first practice round we played was on the back nine and I was remembering some shots, some good and some bad, kind of kicking myself a little bit,” the 37-year-old said. “I would have liked to hit a better shot into 18, but Cameron had a really tough up-and-down and made a great putt, and then hit a great shot in the playoff and forced my hand on the second shot there. I was very happy with everything I did, and I don’t feel like I did anything differently last year than the times that I’ve won. I would like to do the exact same thing tomorrow and hopefully it’s good enough.”

For 22-year-old Niemann, Sunday is a chance to shake off a playoff loss at the Sentry Tournament of Champions last week in Maui. Niemann failed to birdie either of the back nine par fives at Kapalua on Sunday and it proved costly. When he failed to birdie the 18th again in the playoff, it allowed Harris English to pounce and take the title.

But on Saturday in Honolulu, Niemann hit two towering 7-woods on the last hole to set up a close-range eagle to finish off his round and bring him within two shots of the lead. The last player to lose at Kapalua and win the following week at the Sony Open was Jimmy Walker in 2015.

“The eagle was huge. I wasn’t really satisfied on my first 16 holes. I thought I was playing great. I thought I could put myself in a better position, and then finishing that way and making eagle on 18 made me really happy and gave me a bit of motivation for tomorrow,” Niemann said.

“I took a lot of experience from last week. I’m just going to try to put everything I took from last week into this week and hopefully try to win it. I’m playing great. Just need to keep doing the same stuff I’ve been doing these two weeks and hopefully get a good round tomorrow, and you never know.”

For Na, it’s just good to be playing at all. Two years ago he had to miss the tournament after breaking his finger in the lead up to the Sentry Tournament of Champions. A year ago, he hurt his neck, and once again was forced out of the field.

“I actually pulled my rib Wednesday before the Pro-Am and was like, here we go again, but I’m just happy to be playing. Maybe that’s the attitude I need,” Na said of how he almost found himself sitting out again.

When he made his fourth consecutive birdie on the 14th hole – his sixth of the round to go with an eagle – Na needed to play the final four holes in 3 under to shoot 59. He made life tough by missing a 10-footer on the 15th and the dream was over when he missed a seven-footer on the penultimate hole.

“I played great. I made my share of putts. But on 17, you’re thinking, OK, I make birdie here, eagle the last and I have a 59 and how often do you get a chance for that magic number,” he said. “And it’s definitely in your head. If you’re a professional golfer, it’s in your head. It was fun and exciting. Unfortunately, we misread that putt totally.”

He’ll have a chance to atone on Sunday. They all will.