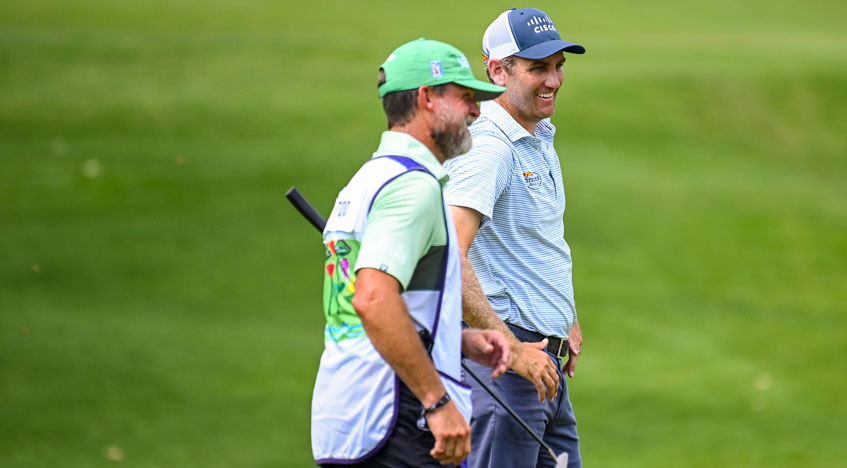 Brendon Todd’s first two wins this season were the feel-good story of the fall, but he’s proving to be more than a sentimental storyline at the World Golf Championship-FedEx St. Jude Invitational.

Todd sits atop a field of the game’s elite. Some stellar short-game play helped him shoot 11-under 129 (64-65) for his first two trips around TPC Southwind this week. Todd now has 10 rounds of 65 or lower this season, tied with Bryson DeChambeau for most on TOUR.

Todd will start the weekend with a two-stroke lead over Rickie Fowler. Brooks Koepka is in third place, lurking four shots off the lead, along with Presidents Cup participant Byeong-Hun An and Chez Reavie.

A win this week would undoubtedly be the culmination of Todd’s incredible comeback from a four-year slump. He could become the first three-time winner this year. This is just his seventh WGC start.

Todd’s two wins in the fall – at the Bermuda Championship and Mayakoba Golf Classic – showed that not only could he survive those difficult seasons but he could become better than ever. A win this week would put Todd as high as No. 2 in the FedExCup standings with just two weeks remaining in the regular season.

“In my whole life, this is definitely the most confident I’ve ever felt with my golf game. It’s probably the most versatile I’ve ever been ball‑striking‑wise,” Todd said Friday. “I still don’t hit it far, but I feel like I’m able to shape shots a little bit. And my short game’s solid, so it just kind of comes down to how the putting is.”

Todd ranks 68th in the 78-man field in Strokes Gained: Off-the-Tee but is in the top 10 in the other three Strokes Gained categories.

He has just one bogey this week despite missing 12 greens.

His putting has been even better, calling it “as good as it gets.” Todd holed a 46-footer Thursday and added a 50-footer Friday. He’s missed just one of his 12 attempts from 4-8 feet, as well.

His previous record for the opening two rounds was +6.04 in the 2014 AT&T Byron Nelson, which was the first win of his career.

Todd had to wait five years after that Nelson win to re-enter the winner’s circle. In between his first two wins, he finished outside the top 180 in the FedExCup in four consecutive seasons and made just five cuts from 2016-18. He had to return to the Korn Ferry Tour to regain his card.

Fowler hasn’t had a top-10 since January, but is pleased with his ball-striking after some recent work with swing coach John Tillery.

Koepka hasn’t hoisted a trophy since winning at TPC Southwind last year, but he shot 62 on Thursday. He reached 10 under par and was in the lead when he made the turn Friday, but stumbled to 38 on the final nine holes.

A duel between Todd and Koepka would be a contrast in styles. Koepka is 21st on TOUR with an average driving distance of 307.2 yards. That’s more than 35 yards longer than Todd, who ranks ahead of just seven players in the driving-distance statistic.

Koepka can overpower a golf course, though his length often overshadows his stellar iron play and underrated short game. He leads the field in Strokes Gained: Approach-the-Green this week. Todd, on the other hand, uses his putter as an equalizer

This wouldn’t be the first time since the season’s resumption that Todd has gone toe-to-toe with one of the game’s big bombers, though. One month ago, Todd took a two-shot lead over Dustin Johnson into the final round of the Travelers Championship.

Todd opened the final round with 11 straight pars as he watched several birdie putts slide by the hole. He was still just two back before playing the final seven holes in 5 over, including a triple on the 12th hole. Todd said he wasn’t intimidated by his final-round foe, though.

“Sunday at Travelers was a tough day for me, but I felt prepared for that round. I felt like I handled it really well. I was calm, I was confident, I hit awesome shots for the first 11 holes and really even for the last six holes, but 1 through 11 I burned five or six edges,” Todd said. “I was hitting really good putts and it just wasn’t my day on the greens and it was Dustin’s on the greens. He kept making putt after putt after putt and put pressure on me.

“I think that was just a day that just didn’t go my way and kind of spiraled the wrong way.”

Now Todd has a chance to make amends and walk away with the biggest title of his career.

“It would be really, really satisfying,” he said. “I feel like as a junior golfer, college golfer, I was always winning big events. Now I’m capable of winning big events on the professional stage. I’m really excited to have the confidence now and the tools in my game to compete for these titles. Just having a chance to win one is a big deal right now.”