NASSAU, Bahamas – Tiger Woods was putting the finishing touches on a bounce-back round at the Hero World Challenge when the 18th hole got him again.

Woods pushed his 5-wood tee shot into a bush right of the fairway and had to play his next shot from his knees, advancing that attempt only a few yards. He failed to reach the green with his next shot and finished with a double bogey-6 and a 3-under 69.

It wasn’t until Woods was in the scoring area that he was informed his second shot at the 18th hole was under review with officials checking to see if he hit the chip twice.

After a 25-minute review, officials ruled that even through Woods hit the ball twice it could only be determined using slow motion and high-definition footage and therefore there was no violation.

“I didn’t feel like I made contact twice,” said Woods, who finished the day at 2 under and was eight strokes off the lead. “It was such a short little shot, I was just trying to hit it sideways there. Under slow motion and high-def, you can see that the ball hit the clubface twice, but there is no penalty.”

Mark Russell, the PGA Tour’s vice president of rules and competitions, said there would be no way for Woods to know he hit the ball twice.

“When you slowed it down to ultraslow motion, high-definition television, you could see where the [ball] did stay on the clubface quite a bit of time and it looked like he might have hit it twice, but there’s no way he could tell that,” Russell said. “In this age of high-definition slow motion television we’ve got a decision [34-3/10, limitations on use of video evidence]. Basically it says if the player did not know that he did that and the only way you can tell that is by using this type of slow motion technology, he’s exempt from the rules, so there’s no penalty there.” 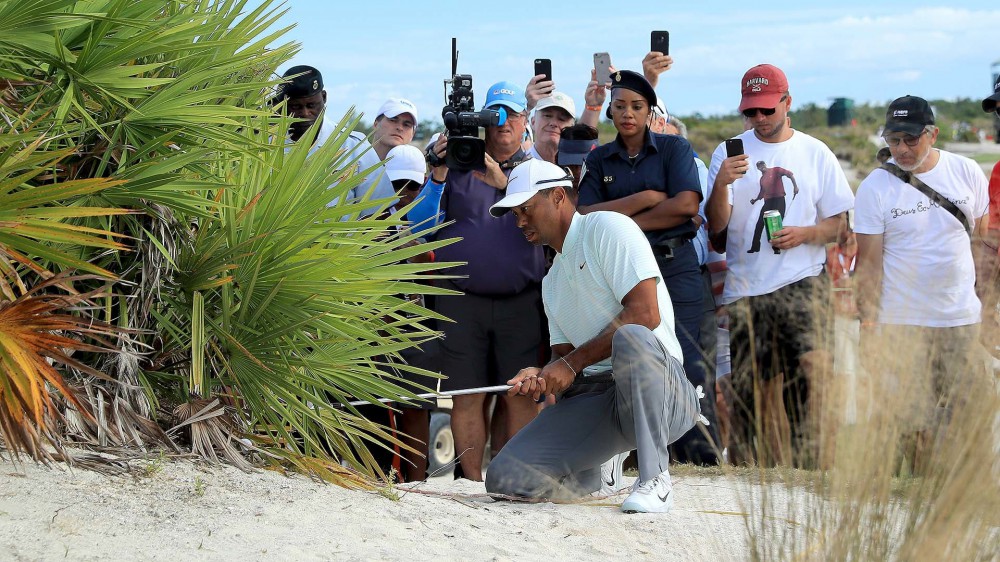