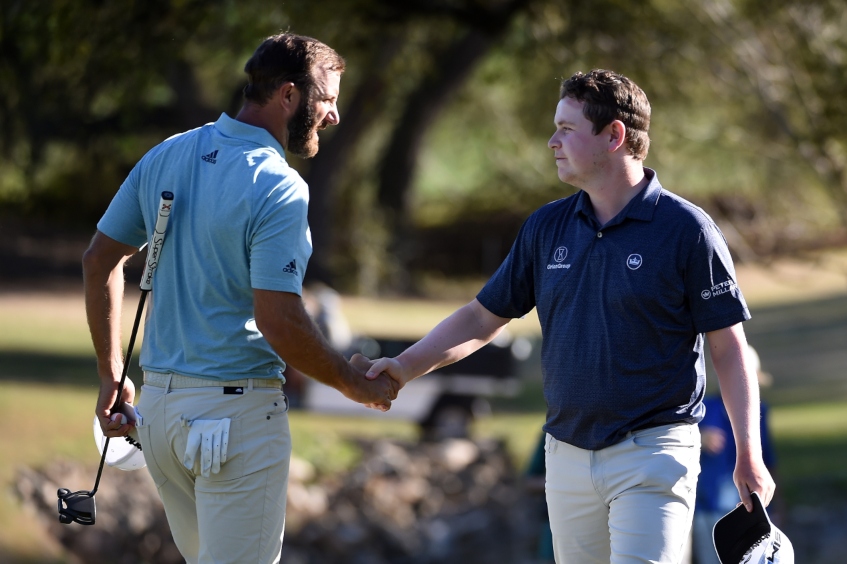 AUSTIN, Texas — Robert MacIntyre grew up playing the rough-and-tumble Scottish sport of shinty, and he had more than enough fight to give Dustin Johnson all he could handle Thursday in the WGC-Dell Technologies Match Play.

RELATED: Bracket, Scoring | Who will advance? All the scenarios for Friday

Johnson had to rally late with an eagle and a clutch birdie to send the match to the final hole, where both players missed birdie chances and settled for a tie.

Neither the world’s No. 1 player nor the 24-year-old from the tiny town of Oban were sure what to make of it.

“It was a tough match,” Johnson said. “Ended up making a really good halve, and definitely pleased with it.”

Ultimately, both remained in position to advance out of their group to the weekend knockout stage.

“Obviously, I was dying to win that match,” MacIntyre said. “I was in such a great position to do it. But he threw everything at me, and I can be proud of finishing there all square. Inside I’m a little disappointed not to win. But once we walk away from here and drive back to the house, it’s going to be, ‘You know what? I can compete with these best guys on the planet.”

Some of the best in the planet were eliminated on the second day of round-robin group play.

Justin Thomas, the No. 2 seed, fell behind big on the front nine for the second straight day and couldn’t catch up. Thomas made a strong rally against defending champion Kevin Kisner before losing on the 17th hole.

Tyrrell Hatton delivered more highlights — not so much with a shot, but the artful tossing of a club and the sarcastic clapping of his hands — in losing to Sergio Garcia. The Spaniard, whose American home is in Austin, won his second match and thus eliminated Hatton, the No. 8 seed.

Other top seeds in the 16 groups who have no chance to move on were PGA champion Collin Morikawa (4), Tony Finau (12) and Viktor Hovland of Norway (13). In all, 18 players had matches Friday with nothing on the line.

Friday is the final day for groups, and Kisner’s victory set up a win-or-go-home match against Kuchar, a past Match Play champion who beat Thomas on the first day and outlasted Louis Oosthuizen on Thursday.

Jon Rahm and Ryan Palmer also square off Friday after both won went to 2-0 in their group. Rahm had a harder time than he imagined with The Open champion Shane Lowry, who was 3 down with three holes to play when the Irishman went birdie-birdie to send it to the 18th, and then showed off those great hands with a pitch from under a tree to 12 feet.

He missed the birdie putt and Rahm, who would have had a putt from the same range, smiled a sigh of relief.

It’s hard to find a true David vs. Goliath at this level of golf, not with the top 64 players available from the world ranking. MacIntyre, trying to nail down a spot in his first Masters, worked his way up to No. 44 with his first victory on the European Tour last fall and a close call in Dubai a few months later.

He briefly stepped away from golf to return to shinty, a sport that resembles a mix of field hockey and rugby that MacIntyre often says is “in my blood,” not to mention whatever blood he spills on the pitch.

He knew what he faced against Johnson and was up for it.

MacIntyre birdied the ninth, made a 25-foot birdie on the 10th to take his first lead, and then Johnson put his tee shot in the water on the 11th. MacIntyre returned to a 2-up lead when Johnson made bogey on the 14th, and the Scot looked poised to pull of a stunner.

But the Scot left himself in a tough spot on the par-5 16th and could only manage par. Johnson was 10 feet away for eagle, and MacIntyre still had him putt it (Johnson made it). The turning point came on the par-3 17th, a most dangerous par 3 for players hitting no more than wedge. Johnson poured in an 18-footer to level the match.

“He holed putts when he had to hole putts,” MacIntyre said. “He does that to win numerous majors.”

— Patrick Cantlay played another superb round and still had to go the distance, this time making seven birdies in a 1-up victory over Carlos Ortiz. Cantlay is the equivalent of 15-under par through 36 holes.

— Dylan Frittelli, the South African who hit the winning shot for Texas when the Longhorns won the NCAA title in 2012, has required only 29 holes to win both his matches.

— Ian Poulter had a 3-up lead with three to play when he was forced to the 18th hole by Cameron Smith, who stuffed his approach into 6 feet. No matter. Poulter delivered a 15-foot birdie putt to win a second straight match. Rory McIlroy won easily, but now needs Poulter to lose Friday to have any chance of advancing.