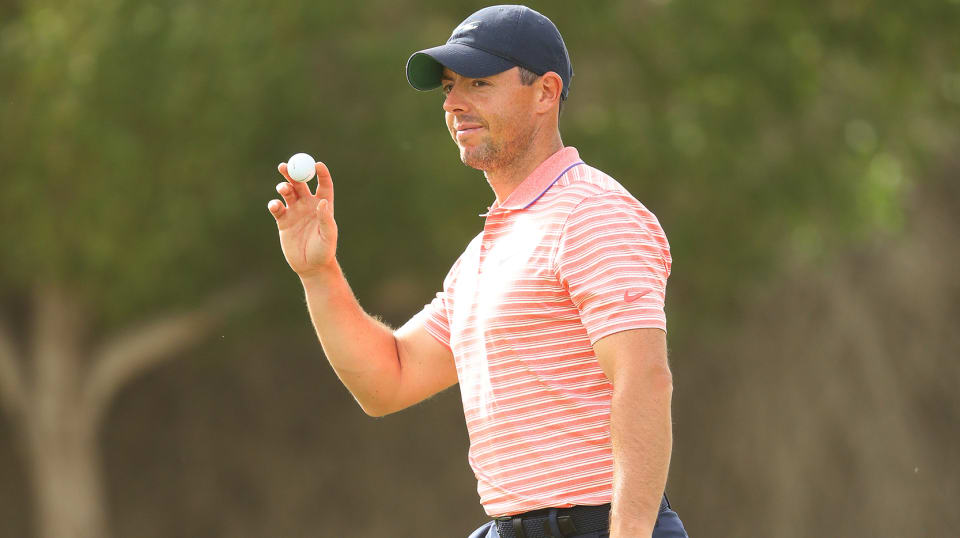 ABU DHABI, United Arab Emirates — Rory McIlroy will take a one-shot lead into the final round of the season-opening Abu Dhabi Championship after posting a 5-under 67 on Saturday.

McIlroy holed out from 73 yards to eagle the 10th and added five birdies to go 13 under, wrestling control of the tournament from Tyrrell Hatton (71), who trails by a shot.

“I thought I did well today. Obviously had that big stroke of luck on 10, the ball hitting the pin and going in,” the four-time major champion said. “Sometimes that’s what you need in golf tournaments to be in contention and to end up winning is those little strokes of luck every now and again.”

Hatton held a 5-shot lead when play was halted Friday because of fading light, but he finished the second round up by just a shot early Saturday before the third round started.

“I just felt like I had nothing really go my way,” Hatton said of his 71. “Hit a couple decent shots and ran into a bunker with a terrible lie and had quite a few putts burning the edge or lipping out. Pretty disappointed.”

One shot back heading into Sunday “isn’t ideal but a lot can happen in 18 holes,” the Englishman said.

Tommy Fleetwood (67) had six birdies to put himself two shots behind McIlroy and alone in third place. He rolled in a putt on the 12th from nearly 50 feet.

David Lipsky and Marc Warren both shot 68 and share fourth place, three shots back of McIlroy.

The Northern Irishman in 10 appearances at Abu Dhabi has finished second on four occasions and third three times. Apart from one missed cut, McIlroy has only one finish outside the top 10 — tied for 11th place in 2008 in his first appearance.

“I can’t go into tomorrow thinking it’s my turn,” McIlroy said. “I want to make it my turn. I have to go out there and continue to hit the ball like I hit it on the back nine tonight. If I can do that and give myself plenty of chances, I’ll have a real chance.”

Earlier Saturday, Justin Thomas missed the cut after he double-bogeyed the 18th.

Alexander Levy produced a hole-in-one on the 177-yard, par-3 15th. The Frenchman is eight shots off the lead.

“A perfect yardage for a 9-iron, wind from the left,” Levy said. “Hit a good 9-iron a little bit thin. I was thinking it was short but (it) bounced in the hole. Yeah, it’s a really good feeling.”