The temperature at TPC Scottsdale had just crept into the 50s when Rory McIlroy teed off at 8 a.m. local time in Round 1 of the Waste Management Phoenix Open. It was a chilly reception in more ways than one for the world No. 6 in his tournament debut.

McIlroy knocked his opening tee shot on the par-4 10th, 348 yards into the left native area. His second shot finished in a front, greenside bunker. 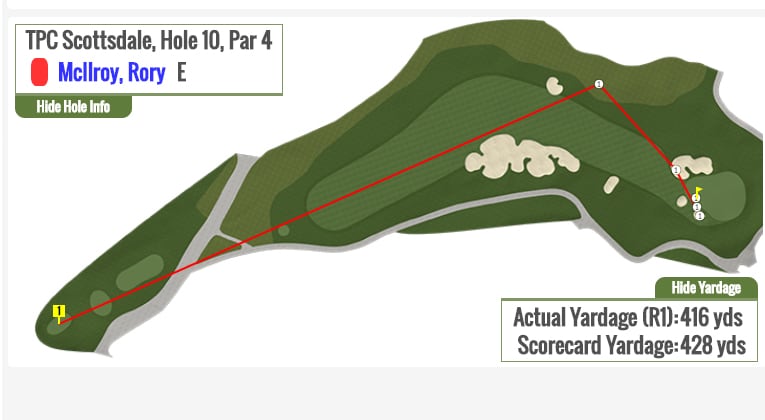 McIlroy then went bunker to bunker, left his fourth shot short of the green and took two more swipes for a double-bogey 6.

McIlroy followed that with a bogey at the par-4 11th and was 3 over through two holes.

“It was obviously cold this morning. I was really surprised how far my tee shot went on [No.] 10 to get into the desert there. It was like a 340 [yard] run-out. I had no idea I could hit 340 in that temperature,” McIlroy said. “And then from there, didn’t really have shot, hit it into the front bunker and then I just made a mess of it from there, thinned the bunker shot into the next bunker and didn’t get that one up-and-down. And then on the next [hole], hit it behind a couple of trees and had to chip out and hit a really good wedge shot in and just missed the putt.”

No sooner had he played his way toward the bottom of the board, he began his climb back up:

That, however, was the end of his scoring. McIlroy parred five of his final six holes, dropping a shot at the par-4 eighth. The tally: 1-under 70, seven off the lead.

“Yeah, it was a good battle back. Being 3 over through two isn’t ideal, especially on this golf course where you sort of need to make birdies,” McIlroy said.

“I wish I didn’t drop that shot coming in on the eighth hole, but shooting under par after the start wasn’t too bad.”