In this week’s Rosaforte Report: Si Woo Kim’s putting cost him a second title, Luke List gets back on the cusp of victory and Dennis Walters earns another great honor in his amazing career.

Si Woo Kim started working with Sean Foley at the 2017 Genesis Open. According to Foley, he was dead last in strokes gained: off the tee and strokes gained: into the green. Nine tournaments later he won The Players Championship. At 21, he was the youngest winner of what some consider the fifth major.

As Foley pointed out, “If he was American and not Korean, he’d be household name already, like he is in Korea. Imagine if the kid was from California or Texas. He could be a senior at the University of Florida right now.”

Since The Players, Si Woo has been going through a difficult growing up stage. Four weeks ago he let go of Foley, telling the instructor he felt he had understood all the principles he needed to work on, and just thought the could do it on his own. Foley went total high road. “In a way,” Foley told me on Sunday, “that’s kind of what you’re after.” Kim has since hired Andrew Getson, who works with Phil Mickelson, as his swing coach.

Prior to the start of the Heritage, Kim was ranked 25th in strokes gained: off the tee and 202nd (out of 203) in strokes gained: putting. But, according to Gregory, Kim was leading the field in the latter category entering the home stretch at Harbour Town. However, under the pressure of trying to close out a tournament on a windy day along the Calibogue Sound, the South Korean prodigy missed four putts inside 7 feet on the final four holes of regulation before losing to Satoshi Kodaira of Japan in a playoff.

“He putted great for 68 holes and just lost it,” Gregory said. “It was his best putting performance a long time. He’s becoming a complete player. He just didn’t finish it off.”

After he won The Players, Foley said the young man had so much poise, “it looked like he had been there 150 times before.”

But this was not the Si Woo Kim that was a perfect 10-for-10 getting up and down in the final round last May at TPC Sawgrass; or the guy who went through 2012 Q-School and earned his card at age 17, won a Web.com tournament in 2015 and the 2016 Wyndham Championship.

This was a young player in need of continued guidance, maturity and, as Gregory said, more opportunities to close out tournaments.

CLOSE TO THE WINNER’S LIST: Luke List stands atop the list of career non-winners trending toward their first victory in 2018. List has 109 starts in his career and four top-10 finishes this season. Since Feb. 25, List lost a playoff to Justin Thomas in the Honda Classic, finished T-7 with a final-round 68 at the Arnold Palmer Invitational, and is coming off a T-3 finish at the RBC Heritage, one shot out of a playoff.

Of the 18 players with at least four top-ten finishes on the PGA Tour this season, List is the only one without a victory in his career yet. He is the highest-ranked player from North America without a Tour title to his credit.

Asked on Sunday when the breakthrough will come, List said, “Hopefully next week,” meaning the Valero Texas Open, which begins Thursday in San Antonio.

That wouldn’t surprise swing coach Jamie Mulligan, who has been caretaker of List’s rise in the world rankings (currently a career-best 53rd) and FedExCup race (currently 11th). “He keeps getting better and better and better,” said Mulligan. “We’ve talked a bunch about how you can play every type of course. You wouldn’t think a tiny little course like this one wouldn’t fit him, with all the trees, but it did. He’s getting more comfortable in wanting to get into the last group.”

List wasn’t especially satisfied with his closing 72. He made four bogeys compared to four the first three rounds combined, but considering the swing wasn’t there on Sunday, that Harbour Town didn’t really fit his eye, and he was playing a little under the weather, this was another performance on which to build.

One takeaway for List was his attitude and he expressed that in his post-round news conference. “I’m getting better each opportunity,” he said. “And I feel like my game has risen to the point where I expect to contend every week. So it’s going to happen.” CALL FROM THE HALL NEXT?: Eight of the nine winners of both the PGA Distinguished Service Award and the USGA’s Bob Jones Award are in the World Golf Hall of Fame. They would be Arnold Palmer, Jack Nicklaus, Byron Nelson, Gene Sarazen, Patty Berg, Jackie Burke, Bob Hope, and President George H.W. Bush.

The lone non-member among this group was announced last week by the USGA as the latest recipient of the Jones Award.

That would be Dennis Walters, who will be introduced by Nicklaus at the dinner in his honor next month at the U.S. Open.

Is a spot in the Hall of Fame upcoming? This latest award underscores the work done by the paraplegic golfer that has given over 3,000 clinics strapped to his golf cart, hitting his baby draw time and time again since 1977 – three years after a golf cart accident left him paralyzed from the waist down.

“I think that’s way beyond my control,” Walters told me Monday morning from his home in Jupiter, Fla. “I have nothing to do with that except if someone ever gives me a phone call.”

Will the phone ever ring? Will Walters join Hope and Bush among the non-golfers on the list? Or were those exceptions that will never be followed by Walters, who characterizes his golf show as a one-hour combination of both golf and life lessons.

There have been lobbies on his behalf, but Walters, 68, doesn’t seem hopeful. 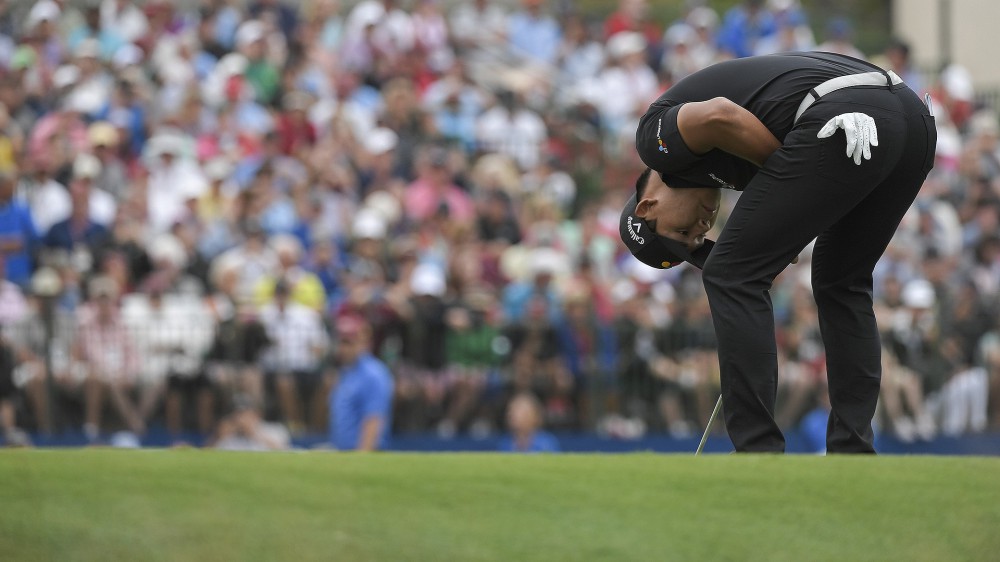 Kang leads by 3 heading into Nelson final round