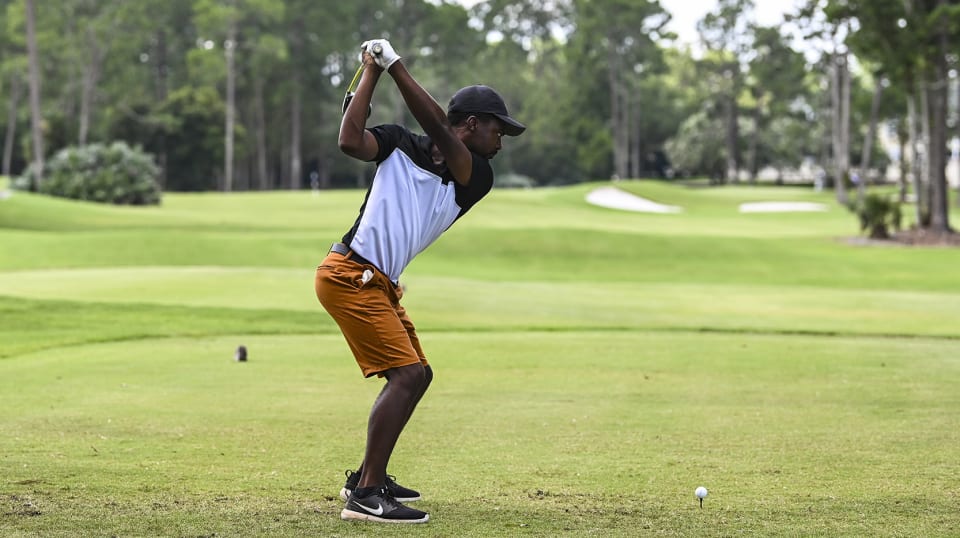 ST. AUGUSTINE, Fla. – Rovonta Young, seeking his first professional victory four years after the end of his collegiate career at Alabama A&M, shot a back-nine 31 for a 6-under 66 to win the APGA Tour event at the King & Bear course at World Golf Village on Tuesday.

His 140 total edged Landon Lyons and Davin White by one.

“First professional win since I turned pro in 2018,” said Young, 26, who overcame a six-shot deficit after the first round. “It’s a big hurdle. I’m glad I overcame it today.

“It’s been my dream since I was 3 years old to be on the PGA TOUR,” he added.

Tuesday brought warmer weather after a chilly start to the tournament.

Lutchman is third in the APGA Collegiate Golf Ranking compiled by PGA TOUR University. Teammate Mulbe Dillard, who finished just a shot behind him, is No. 1. If they maintain their rankings, they will earn exemptions into the APGA Tour summer events along with expenses and entry into pre-qualifying for the Korn Ferry Tour Qualifying Tournament.

It’s been a banner year for the APGA. Mack and fellow pro Kamaiu Johnson, golfing ambassadors for Farmers Insurance, have been getting a handful of starts on the PGA TOUR. Mack was 1 under after 14 holes in the first round of the Farmers Insurance Open before eventually missing the cut (74-75). He shot 70-76 to also miss the cut at The Genesis Invitational, but still finished ahead of players like Rory McIlroy and Justin Thomas.

In other words, the APGA guys are showing they can compete.

“It’s tough to be just thrown into it like that,” said APGA Director of Player Development Adrian Stills. “But we’ve seen that our guys can do it, and we’ve got 10 more like that right behind Kamaiu and Willie. You just have to look at what Rovonta did today.”

Young, who still lives in Huntsville, Alabama, where he went to school, has not one of the APGA headliners, and his first victory only underlines the tour’s depth. He felt like he was underachieving and reached a turning point at an APGA tournament at TPC Deere Run last year, where he finished well back. Seeking a mental coach, he sought a referral from his grandfather, Charles Herring, who raised him and got him started in the game.

Enter Dr. Richard Trammel, a sports psychologist from Birmingham who is a high-level golfer himself and has worked with players on the Korn Ferry Tour. It clicked immediately. Their work paid off Tuesday as Young went birdie, birdie, eagle, birdie on holes 11-14 to pull away.

“He’s helped me tremendously, from the first session,” said Young, who grew up in Rancho Cucamonga, California. “I feel as if I have the firepower, I have the accuracy, and I have the putting. It’s just the six inches between my ears. Just handling the pressure and the moment.”

Trammel texted his congratulations Tuesday before Young had even had a chance to thank him. “He just said, ‘Yes!’” Young said. “He’s someone who has really put a lot of confidence in me; he’s got a couple guys on the Korn Ferry, and he’s just said, ‘You’ve got it.’”

The field of 49 players was competing for $25,000 in prize money at the 7,279-yard, par 72 golf course designed by Jack Nicklaus and Arnold Palmer.

The APGA Tour at World Golf Village was the fourth tournament of the landmark 2021 season, featuring a record 13 events and $350,000 in prize money, almost double from the 2020 season for the tour, whose mission is to bring greater diversity to the sport of golf.

The tournament was conducted under social-distancing and health/safety guidelines in conjunction with regional authorities. The APGA Tour’s next stop: Las Vegas, April 12 and 13. Young, imbued with confidence, his PGA TOUR dream still very much alive, will be there.