SAINT-QUENTIN-EN-YVELINES, France – For the sixth straight time, Europe won the Ryder Cup on its home soil.

Francesco Molinari locked up the clinching point when Phil Mickelson hit his tee shot in the water at the par-3 16th and conceded the match to The Open champion, 4 and 2, while still on the tee.

The Americans remain winless on European soil since 1993. Europeans have now won seven of the last nine events, dating back to 2002.

Molinari became the first European player in history to go 5-0-0 in a Ryder Cup, as the senior leaders of the U.S. team, Mickelson and Tiger Woods, combined to go 0-6-0.

Here’s how all the matches played out this week at Le Golf National outside Paris:

Match 17: Thomas (US) def. McIlroy (E), 1up
Incredible match from beginning to end. One of the best of the week. Thomas won the first hole, then McIlroy won the next three in a row. The match was square on the 18th tee, and McIlroy drove it into a fried-egg lie in a bunker. It didn’t end well for him. He ended up conceding to Thomas in the final fairway.

Match 18: Casey (E) vs. Koepka (US), halved
Hard to believe, but this was the first halved match of the Ryder Cup. Neither player was ever more than 1 up at any point and both played slightly better than average. Casey’s birdie on the 17th to square the match was as big a clutch moment as you can have.

Match 19: Simpson (US) def. Rose (E), 3 and 2
This was a bit of an upset but a point the U.S. had to have for momentum. Simpson lost his first match but quietly won his next two to become an unsung hero for an American team that desperately needed one. Rose seemed tired.

Match 20: Rahm (E) def. Woods (US), 2 and 1
Woods never led the match, although Rahm was never more than 2 up either. Woods appeared exhausted and unenthused. Rahm took advantage to earn his first Ryder Cup point in the grandest of fashions.

Match 21: Finau (US) def. Fleetwood (E), 6 and 4
Finau was an absolute monster in this match, and the previously undefeated Fleetwood couldn’t do much to combat him. Finau was 5 up after nine holes and never looked back. A great, great week for Finau, who will most assuredly make more Ryder Cups.

Match 22: Poulter (E) def. Johnson (US), 2 up
Poulter turned into Poulter one more time against the world’s top-ranked player. Poulter was 2 up after four holes, but Johnson was up after 12. Poulter would have none of it. He birdied 14 and 15 to seize control, closing it out on 18.

Match 23: Olesen (E) def. Spieth (US), 5 and 4
Some things defy explanation, and Spieth now goes to 0-6 all-time in singles play for U.S. teams in the Presidents and Ryder cups. Olesen sat out all day on Saturday and came out steady against Spieth, who made only one birdie.

Match 24: Garcia (E) def. Fowler (US), 2 and 1
The full point made Garcia the top point earner in the history of the Ryder Cup, surpassing Nick Faldo. This match was fairly close, too, but Fowler never led at any point. The cup was determined before this was over, so it was icing on the European cake.

Match 25: Molinari (E) def. Mickelson (US), 4 and 2
When Mickelson dunked it in the water on the 16th hole, Molinari clinched the winning point for Europe and also went a perfect 5-0 for the week. Just an incredible week for The Open champion. Mickelson played poorly again and ended the week 0-2.

Match 26: Reed (US) def. Hatton (E), 3 and 2
Reed made up in part for poor performances the previous two days in a match that he won easily against an overmatched Hatton. Too bad for the Americans that the cup was decided well before this point.

Match 27: Stenson (E) def. Watson (US), 5 and 4
Watson remains winless in Ryder Cup singles matches and Stenson was 3 up after five holes. Again, this was not really particularly close and Watson struggles. Stenson birdies four of the first seven holes.

Match 28: Noren (E) def. DeChambeau (US), 1 up
This match went all the way 18 long after the matches have been decided. One down with one to play, DeChambeau flagged his approach to the final green, but Noren holed a lengthy birdie putt to end the matches and officially start the European celebration.

Match 13: Rose-Stenson (E) def. Johnson-Koepka (US), 2 and 1
The closest match of the session, and it’s no surprise that it came down to Stenson making a 10-footer to save par on the 17th hole to win the match. Rose and Stenson continue to roll when paired together while Johnson and Koepka couldn’t recapture magic of the past.

Match 14: Watson-Simpson (US) def. Garcia-Noren (E), 3 and 2
This was a questionable foursomes lineup for the U.S. and it turns out it was their best duo. Garcia and Noren slapped it around in average fashion, as Watson and Simpson went 4 up through eight and easily hold on.

Match 15: Molinari-Fleetwood (E) def. Woods-DeChambeau, 5 and 4
This was a clinic from the very beginning, and the victory gave the European team a perfect 4-0 record together this week. Both played great and never allowed any openings for the Americans. On the other hand, Woods (0-3) and DeChambeau (0-2) played awful and are both winless on the week.

Match 16: Spieth-Thomas (US) def. Poulter-McIlroy (E), 4 and 3
Poulter and McIlroy looked like they both finally ran out of gas. They didn’t provide much of a fight for Spieth and Thomas, particularly down the stretch. The Americans were only 1 up after seven but appeared in control and were 4 up after 13.

Match 9: Garcia-McIlroy (E) def. Koepka-Finau (US), 2 and 1
Garcia and McIlroy were putting demons, making everything they needed to make. They were 4 up after 13, they lost the next three holes in a row, and then Garcia sealed it with a monster birdie putt on the 17th. They were a combined 7 under par.

Match 10: Casey-Hatton (E) def. Johnson-Fowler (US), 3 and 2
The Americans didn’t do anything spectacular and honestly they were lucky to take the match as deep as they did. The Europeans were a combined 9 under, and there’s just nothing you can do with that kind of display. Casey’s putter was on fire.

Match 11: Molinari-Fleetwood (E) def. Woods-Reed (US), 4 and 3
A thumping of epic proportions. Reed played as poorly as anyone has ever played in the Ryder Cup. Ever. Woods kept them in the match until European putters heated up again, winning four of the last five holes. This Euro duo is now 3-0 together.

Match 12: Spieth-Thomas (US) def. Poulter-Rahm (E), 2 and 1
The only bright spot for the Americans in the session, and they had to fight for it. Rahm and Poulter weren’t on top form, and Spieth and Thomas combined for 10 birdies, including a huge one on the 17th that kept the match from going the full way.

This match wasn’t even as close as it seemed, and it set the tone for Europe to roll in the entire session. The Americans were over par and Stenson and Rose played well together again even though they didn’t really need to.

The European train keeps rolling with an easy win. They were 2 down after five holes, but won the next four consecutive holes to cruise against a U.S. team that was over par. McIlroy needed this after a poor performance in the morning and Poulter was never going to be denied.

Europe was 7 up after nine. Yes, that’s correct. The Americans were awful early and hit poor shot after poor shot. Garcia and Noren were antsy after sitting in the morning and just steamrolled to the easiest of wins. Four birdies in a five-hole stretch were too much.

Another blowout, this one to cap a European clean sweep of the session. The Americans had no gas and were over par, while Molinari and Fleetwood were steady and smooth, winning for the second time on the day. Yes, Europe seems to have found another unstoppable duo.

The only time the U.S. led the match was after the 18th hole. Incredible. Europe was in complete control after the 12th hole, but quickly went cold when Koepka and Finau caught fire. A bad mix for the blue.

Match was even for eight of the first nine holes, but the Americans turned it on quickly and pulled away in the easiest match of the session. McIlroy played horribly the whole time and failed to make a single birdie.

All the matches of this session were great but this one was particularly wild. Spieth did Spieth things (5 under through seven) to get them 3 up after 10, but the Americans lost the next three holes in a row. Thomas’ birdie on 15 was the difference.

The Americans won Nos. 9 and 10 to go 2 up, but Europe won the next two to square the match. Fleetwood’s putter was on fire down the stretch in a match Europe had to have. Reed and Woods played decent, but never found a groove together, especially late. 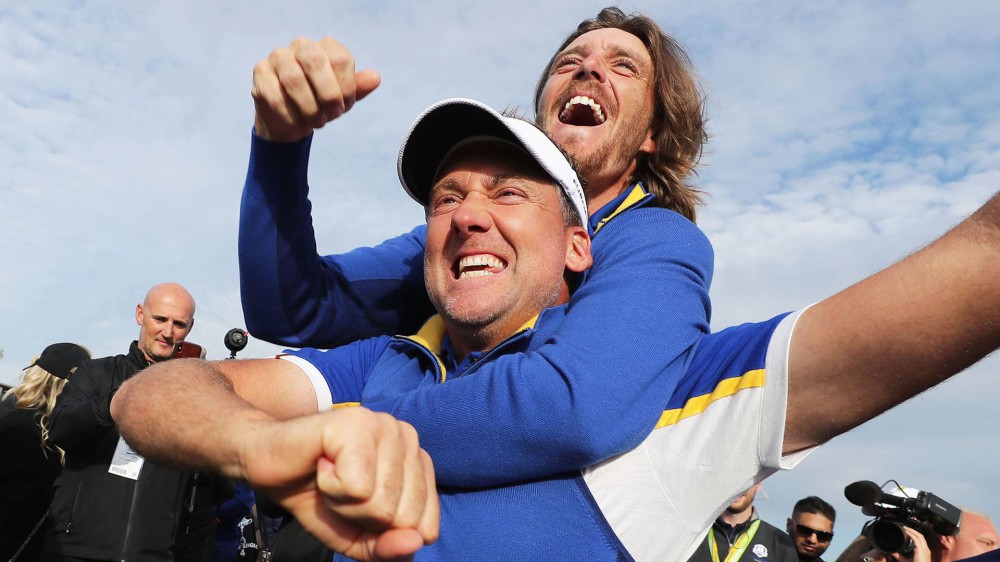