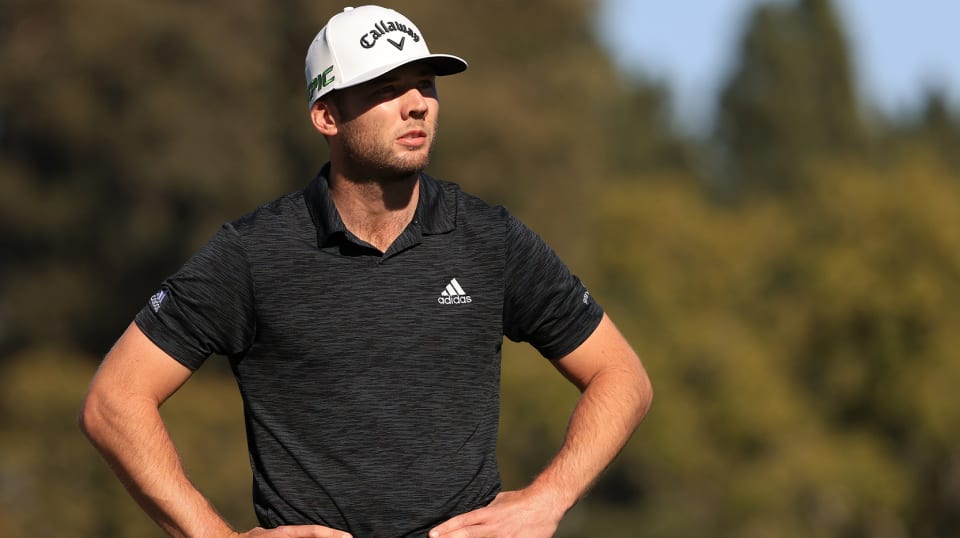 It was from that point on some minor cracks started to show.

The former college golf standout was unable to make birdie on the 11th after his tee shot found trees – a fate that again occurred on the 12th however, he gained a room service bounce back to the fairway. Despite the good luck, Burns would three-putt the green for bogey.

As the light dropped quickly, he wasted a booming drive on the 13th, pulling his wedge shot left of the green from just 134 yards out. When he failed to make a 7-foot par putt the horn stopping play felt like the bell at the end of a prize fight.

Johnson came from the course with some frustration, even par on his round and facing a 17-foot par putt on the 14th hole when play resumes. But when he caught a glimpse of Burns, predicament in his eyes lit up a little. Johnson has played the tournament 13 times prior to this year and has finished inside the top 10 nine times.

The same enthusiasm was painted on Fitzpatrick’s face when he saw the final washup. The former U.S. Amateur winner rode an incredible rollercoaster when he went 10 holes without a par from the third through the 12th. When play halted, he had etched out seven birdies and four bogeys and was trending towards the best round of the day.

“You’ve just got to stick in, that’s the big thing for me. It’s the way I’ve been brought up, especially when it’s tough,” Fitzpatrick said. “I grew up on a golf course that’s very much like this all the time. You’ve just got to get it round and today was another day like that where you’ve got to stick in. Fortunately had a nice stretch on the front nine of birdies and kicked on from there.”

Perhaps the greatest advantage for Fitzpatrick is the need to only play 19 holes Sunday. Winds are forecast to continue in the early hours as those return to finish. But Burns sees his need to negotiate 23 holes as an advantage. More chances to make more birdies.

He’s been in this position before, most notably at the Safeway Open last fall where he was overrun by veteran Stewart Cink. He is mindful of getting too amped up down the stretch this time around.

“As a competitor you have that competitiveness in you and I think it’s all about managing that and using it in the right energy and at the right times,” Burns says. “I’d like to think that I have all the tools to win out here. Obviously there’s a lot of good players, really, really good players. I try not to get caught up in that and am just trying to get better each week and just trying to build as the season goes on.”

With any luck he will be building on a well-earned maiden win.