Scott and Day were part of Thursday’s morning wave that saw its opening round disrupted by a seven-plus-hour weather delay. The stoppage threw their schedule out of whack and gave them two more pre-sunrise commutes to TPC Louisiana.

Despite a 7-under 65 in four-balls, Scott and Day bogeyed four times, including Nos. 16 and 17 – the latter came on a 3-foot par miss by Scott – and shot 72 in foursomes to miss the Zurich cut by a shot at 7 under.

Scott and Day had paired just once together in a team event. That was at the 2015 Presidents Cup, though the two played four-balls and halved Phil Mickelson and Zach Johnson.

Neither seemed to be totally frustrated with their games, they just couldn’t get into a groove together in the alternate-shot format.

“I think there’s a positive for me to take away that I’m hitting the ball still very well, and ultimately the foursomes format can be tough,” Scott said. “I think a couple of extra missed greens from both Jason and I in that format (Day missed three greens n Round 2 while Scott failed to hit two) made a couple bogeys appear that maybe shouldn’t have because we weren’t really out of position, but we missed greens from the fairway and then our short games were under pressure.

“It’s tough to get the rhythm going, and we were grinding hard and didn’t quite get it going. It wasn’t anything horrible, and then ultimately under pressure coming down the last few [holes].”

The pressure at Royal Melbourne this December will be much greater. This week at TPC Louisiana was supposed to be a chance for prospective International Presidents Cuppers to bond and get comfortable with each other in both team formats.

Assistant captain Trevor Immelman said the players accomplished the former. Players stayed in the same hotel and had dinners together, including a big one Tuesday evening on Bourbon Street.

“It was a another stepping stone for us as a group of International players to kind of get to know each other and have some fun,” Immelman said. “The weather delays curtailed some of that because guys are getting back at 8:30 p.m. and waking up at 4 a.m. the next morning and being gone all day. Once the tournament kicked off, we were all just scrambling to get some sleep. But definitely the early part of the week was awesome for us.”

Most of the International hopefuls won’t have those challenges anymore this week, not because this event is back on schedule but because they missed the cut. The week started with 11 of the top 15 players in the International Presidents Cup standings, but all but four of those names were trunk-slamming by 11 a.m. Saturday.

Jhonattan Vegas and Abraham Ancer finished at 7 under after shooting 70 in alternate shot. Cameron Smith missed the cut at 6 under alongside Swedish partner Jonas Blixt. Si Woo Kim and C.T. Pan are going home early with their respective partners at 3 under.

Joaquin Niemann and Dylan Frittelli finished at 2 under, as did Louis Oosthuizen and Charl Schwartzel, who shot 78 in foursomes thanks in large part to a 9 on the par-4 10th after both players hit tee shots in the penalty area.

Els and Immelman shot 71-71 as they pulled double duty this week.

There were a few bright spots, though. Three Canadians made the cut, the duo of Mackenzie Hughes and Corey Conners (T-23), and Adam Hadwin with his partner Jim Knous (T-14). India’s Shubhankar Sharma and Anirban Lahiri made the cut on the number at 8 under.

Then there were Branden Grace and Justin Harding, who shot 4-under 68 in foursomes and are T-11 at 11 under.

“We’re not surprised,” Immelman said of his fellow South Africans. “Those two suit each other. People in America may not know them that well, but these guys are good. … Look, we have the potential to do well. Obviously, the mountain is huge. The American team is stacked – household names, major winners, they’ll probably have Tiger Woods on the team – so we’ve got our work cut out for us no doubt.” 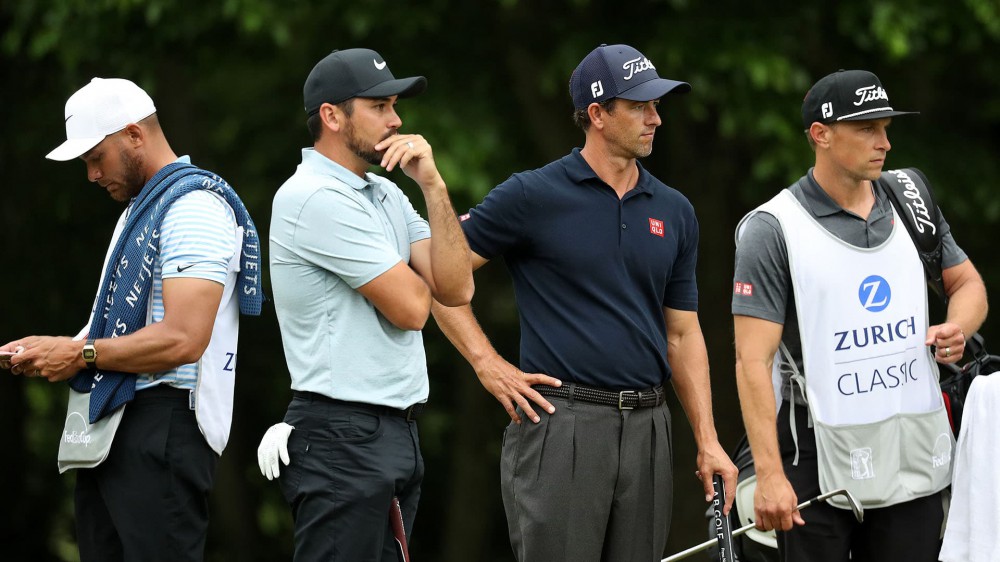 Stock Watch: Look where complaining will get you, Rory and JT