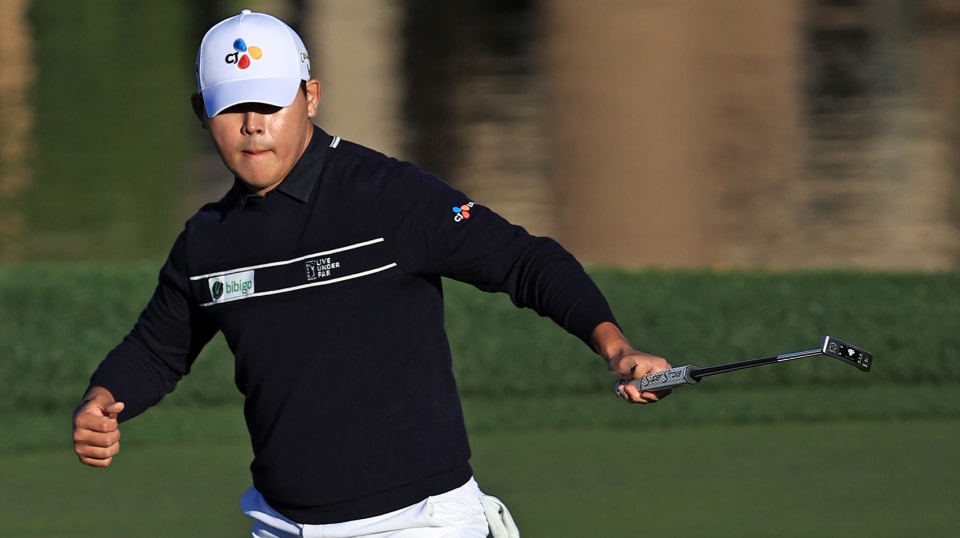 Three trips around Pete Dye’s dastardly Stadium Course at PGA West, and not a single bogey.

Si Woo Kim remains unflappable to the end and birdies two of his last three holes for a one-shot victory over Patrick Cantlay at The American Express. It’s the third PGA TOUR win for the 25-year-old Korean, and the first since he won THE PLAYERS Championship in 2017.

It also moves him up 60 spots to ninth in the FedExCup.

Here are five stories you may have missed from The American Express.

1. Kim gets first W since THE PLAYERS

Si Woo Kim looked like he might never lose again in winning THE PLAYERS Championship in 2017, but had gone 1,352 days without a victory. He had struggled with back pain, shooting an opening-round 87 in the first round of The American Express last year, and course strategy.

“So when I missed the win, when I had the chance to have a win, I didn’t play very well,” Kim said after tying his career best with eight final-round birdies. “I had a lot of ups and downs; I tried to play aggressive and then that actually made me lose.”

He tossed and turned Saturday night despite taking melatonin. He thought about what his coach had said, that he would have plenty of chances to win, to be patient, to believe in himself.

“So that’s what I tried to do,” he said after going 16 for 16 from inside 10 feet on the greens in the final round. “And then I tried not to be emotional and that helps me to the win.”

Kim hit 116 of 144 greens in regulation at The American Express and the Sony Open in Hawaii (T25), the most of any of the 97 players who competed in both tournaments.

“I played about as good as I can possibly play,” Cantlay said after beating the course record by two. His final round featured a 38-footer for birdie on 18, and recalled the 10-under 60 he shot as an amateur at the 2011 Travelers Championship. He called the two rounds “very comparable.”

Cantlay was trying to become the first player since Brandt Snedeker at the 2016 Farmers Insurance Open to win on TOUR after making the cut on the number, and there wasn’t much more he could have done. His 18-under total on the weekend tied Rocco Mediate (2003) for best score in relation to par over the final two rounds of a 72-hole event on TOUR.

One misstep: He bogeyed the par-5 eighth hole on the way to shooting 65 on Saturday.

3. Finau settles for another top-10

Although he shot 68 to finish fourth, Tony Finau wasn’t looking at The American Express as his 35th top-10 finish since his lone PGA TOUR victory at the 2016 Puerto Rico Open.

Instead, the 54-hole co-leader was looking at the AmEx more positively in light of his lackluster T31 at the Sentry Tournament of Champions two weeks ago. (He had gotten into the field as part of the exception made for players who qualified for last season’s TOUR Championship.)

“A couple of those guys just went really low today,” Finau said from PGA West, where he birdied the first two holes but could only manage to go 2 under the rest of the way. “I had some opportunities, I think, to shoot a number. But, man, I’m kind of leaving today pretty encouraged.

“I played nicely,” he continued. “I’ve been working on some things in my golf swing, changed up the putter this week, some positives for me and I like where the game’s at. It’s real early in the calendar year. I didn’t play very good in Maui, so this is actually pretty encouraging for me.”

Cameron Davis made eight birdies for a bogey-free, 8-under 64, and his solo third-place finish was his best result on TOUR. What’s more, the 2017 Australian Open winner wasn’t all that far removed from his previous best, a T6 at the Sanderson Farms Championship last fall.

“Yeah, I’ve been trending in a good direction for a while now,” said Davis, 25.

Everything just clicked, he added, contrary to other final rounds where he’s been in the mix.

“I had a bad ball-striking day and a good putting day and a couple of good ball-striking days and didn’t make any putts,” he said. “I think for me to get over the line it’s just having four solid days in a row where I keep up every part of my game. I’m getting closer to it, it’s obviously great to keep seeing personal bests … because that keeps you excited and keeps you working hard.”

Davis wasn’t the only promising talent to make a run at his first victory.

Mexico’s Abraham Ancer, the runner-up finisher in The American Express last season, birdied his last three holes for a final-round 66 and a T5 finish. At 15 under par, he was eight back, and won’t have to look far to find where he could have improved. His scoring line: 69-65-73-66.

The 2019 Presidents Cup standout, who is not in the field for this week’s Farmers Insurance Open, bogeyed the third hole but heated up with an eagle at the eighth before his back-nine heroics. Mexico’s Carlos Ortiz – 10th in the latest FedExCup standings – remains the last first-time winner on TOUR after winning the Vivint Houston Open in early November.