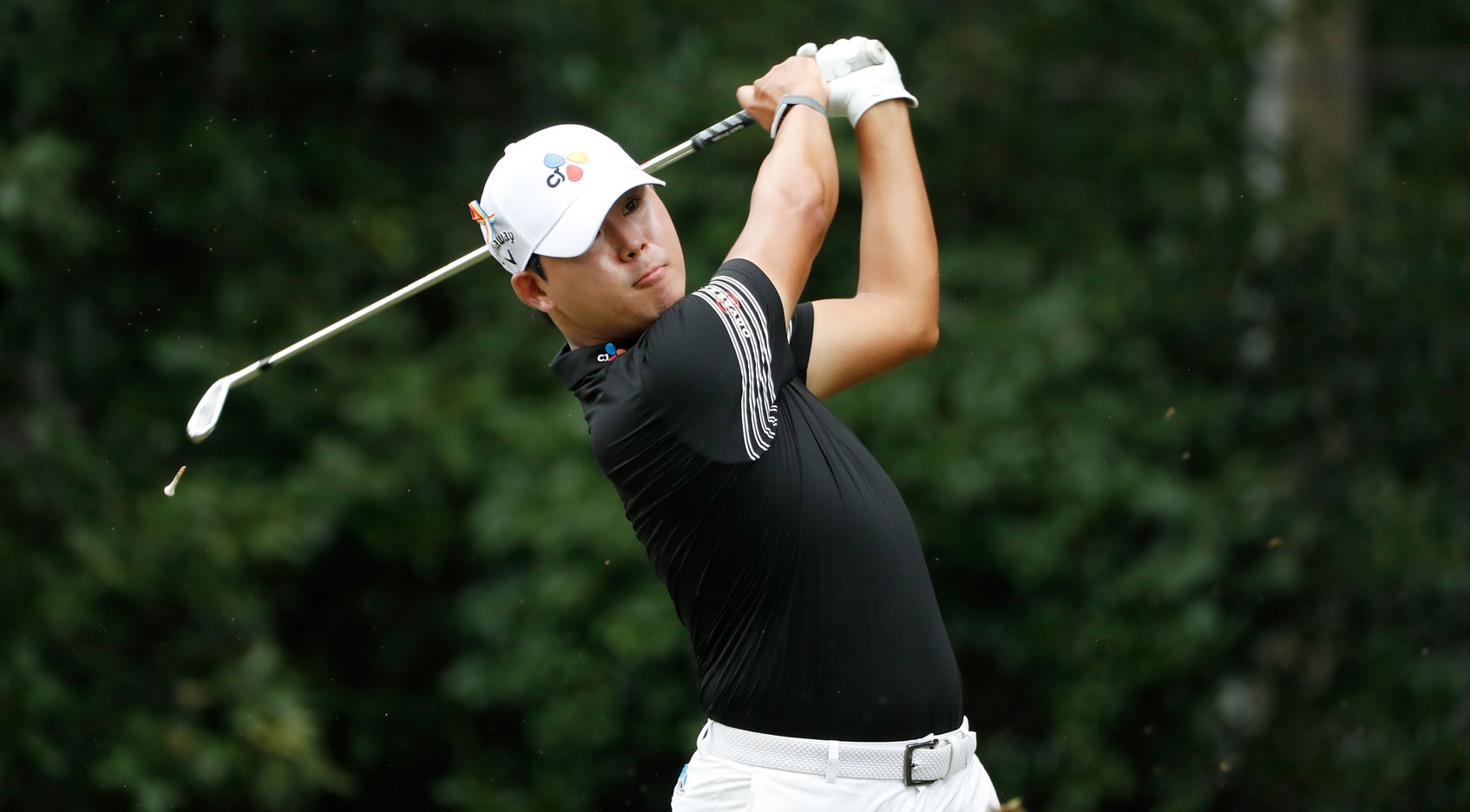 GREENSBORO, N.C. – Si Woo Kim expected to be nervous. After all, it had been a while since he’d been in contention, and here he was playing in the final group on Saturday at the Wyndham Championship.

All that changed on the third hole at Sedgefield Country Club, though, when his 8-iron found the bottom of the cup at the 161-yard par 3. Kim nearly made another hole-in-one on the back nine, too, but this time the ball lipped out, leaving him a 14-inch birdie putt.

When it rains, it pours. Only it didn’t on Saturday until several hours after play was completed around 2 p.m. and Kim was safely in the clubhouse with a very solid 62 and a two-stroke lead.

The ace produced one of the funnier moments on yet another day with virtually no fans in this COVID-19 era on the PGA TOUR. Kim heard a scream by the green and knew he’d hit a good shot, but the 2017 PLAYERS champion didn’t see the ball go in — instead looking quizzically for some sort of sign.

“I only knew it was an ace because there was someone with a radio by the tee box that told me. After hearing that, I was really happy because I wasn’t expecting it,” said Kim, who did see the lipout at No. 12 later, tossing his club to the ground and raising his arms into the air.

Chasing the winner of the 2016 Wyndham Championship on Sunday will be an interesting mix of players  searching for their first PGA TOUR victories like Rob Oppenheim, Doc Redman and Mark Hubbard and the requisite North Carolinians in Redman, double-dipping here, Webb Simpson and Harold Varner.

Simpson, who like Kim is a former winner of the Wyndham Championship, has finished third-second-second in his last three starts here. He may be five strokes back after bogeying the final hole on the way to a 65, but there’s no one more comfortable on this Donald Ross gem than he is.

“I played great,” he said, shrugging off that bogey. “It’s probably the best I’ve played in a long time, I just didn’t capitalize when I needed to. Today could have been a really low one and just dropped a couple shots. So definitely a little frustrating, you know, to end like that, but still a good day.”

All but 25 of the 77 players who made the cut broke par on Saturday when Sedgefield played to an average of 67.8. And with overnight rains in the forecast you can expect more scores like the 61s relinquished to Herman and Zach Johnson in the third round.

“I mean, ball in hand, greens are pretty soft,” Simpson reported. “Pins weren’t easy, but there were some good pins, and this is the type of golf course, if you drive it in the fairway, you’re going to have plenty of opportunities all day.

“I’d like to have got a couple more, but still got a chance tomorrow and that’s all you can ask for.”

The late-blooming, 40-year-old Oppenheim, who is bidding to move into the top 125 and make the FedExCup Playoffs next week for the first time in his third year on TOUR, was the beneficiary of a career-low 62. Adding to his motivation? He’s from Salem, Massachusetts, which is 80 minutes from TPC Boston where THE NORTHERN TRUST will be played next week.