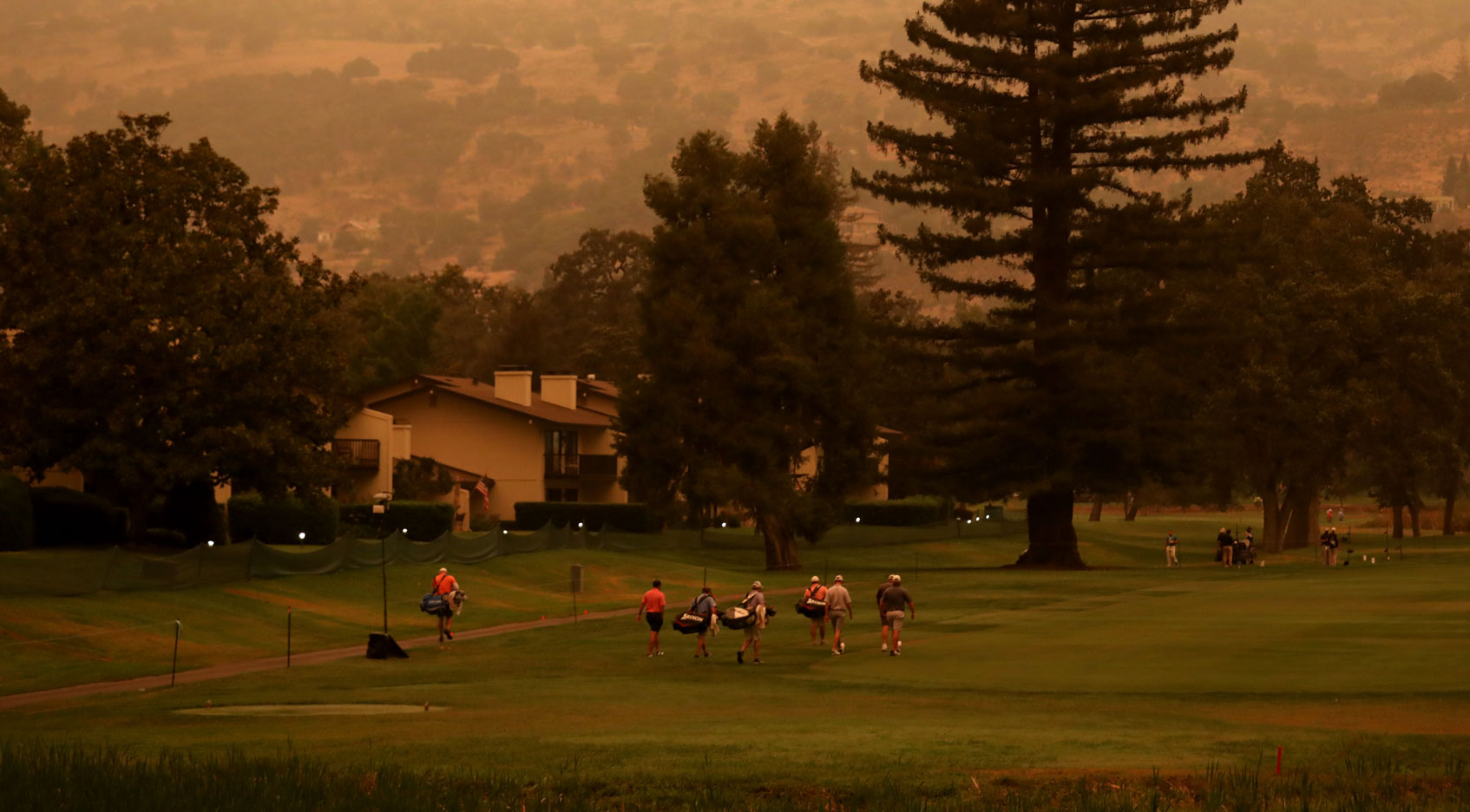 NAPA, Calif. – Officials from the PGA TOUR and Safeway Open will continue to monitor air quality after smoke and ash from nearby wildfires descended on the Silverado Resort ahead of the 2020-21 season opener.

Several wildfires are burning across the state of California and while the immediate area around Napa is currently not in danger the course was blanketed in an eerie darkness and thick smoke during Wednesday practice.

Visibility may yet affect the tournament as players were left to practice under lights on the putting greens and the range in the middle of the day. Safety of all concerned is the top priority.

“Our thoughts are with those impacted by the ongoing wildfires in California. As we do every week, the PGA TOUR is in constant communication with local authorities to monitor current health and safety conditions,” the PGA TOUR said via statement.

“This week in Napa, we are also consulting with the Air Quality Management District, and at this time, there are no restrictions on outdoor activities for the area immediately surrounding the Safeway Open. The Air Quality Index is currently in the moderate range; visibility, however, may become an issue that impacts or temporarily disrupts the event. We will continue to monitor and coordinate with local officials, keeping the well-being of our players and constituents as a top priority.”

“There may be some improvement in the visibility and air quality later this afternoon behind south-southwesterly winds, but additional fires in Monterey County will allow for additional smoke/haze to filter northward into the Bay Area,” Halvorson’s daily forecast said.

The resort is no stranger to wildfires. Significant sections of the course, including grandstands, were destroyed just hours after the 2017 tournament. Brendan Steele won that year but was awaiting a flight for his next tournament when the fires ripped through.

On Wednesday, he said things were very strange indeed and in fact he had slept in longer than expected because the darkness tricked his mind into thinking it was earlier than was actually the case.

“I haven’t seen anything like this from a golf standpoint,” Steele said. “Unfortunately, growing up in California I’ve been around a lot of fires. My parents have been evacuated a number of times from their house up in the mountains above Palm Springs, so we’ve had to deal with it quite a bit. It’s very scary, it’s always very uncomfortable how quickly it moves and not knowing where it is and what’s going on. My thoughts are with those in a similar situation right now.

“As far as us here, if it stays like this, we might have a hard time playing at 7 o’clock in the morning. It’s just very eerie… and it’s amazing how the fire creates its own climate conditions. It looks very strange and somewhat apocalyptic.”

Australian Cameron Davis tried playing early Wednesday. He is scheduled for a 7 a.m. start on Thursday and has experience in the conditions having played the Australian Open last December in thick haze caused by bushfires near Sydney. He said the conditions had not reached that level of concern, which at the time saw tournament officials increase medical personnel onsite for spectators and all involved. Due to the COVID-19 pandemic, spectators are currently not permitted on site for the Safeway Open.

“I have grown up with fires being a sad reality of summers and my thoughts are with all affected,” Davis said. “Last year’s Aussie Open was probably worse than this. I am basing how bad it is on how much my eyes are stinging. It’s amazing how dark it is though. We couldn’t see the ball for the first six holes this morning and I started my round later than my scheduled Thursday tee time.”

Davis wore a mask while practicing Wednesday, something he wishes he had done in Australia. He may yet wear it in competition, or source a neck gaiter or buff to add to his outfit.

“It’s just one more thing you can do to help yourself,” Davis said. “It will be interesting to see if it continues and if we need to allow for the conditions. Do you allow a bit for the ash on the green to slow the ball down for example? At the end of the day, the most important thing is the safety of those involved directly. I hope all fires can be under control soon.”