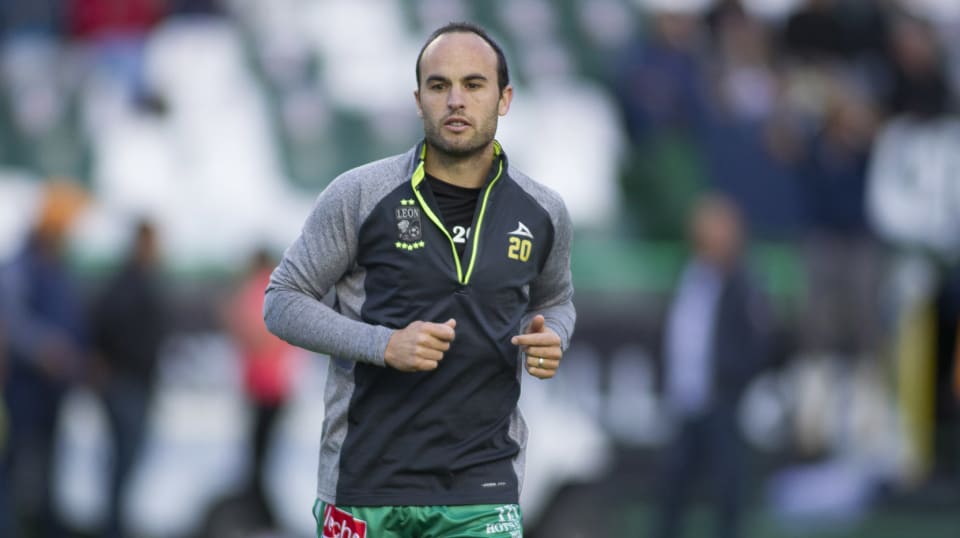 Landon Donovan is generally regarded as the best American male soccer player of all time, so accomplished the Major League Soccer’s MVP award is named in his honor. On Wednesday, though, the 38-year-old steps outside his comfort zone to play with Tony Finau against Paul Casey and singer Jake Owen in the American Express Charity Challenge at PGA WEST in La Quinta, California. Donovan, who is co-founder and manager of the San Diego Loyal Soccer Club, took some time before the event to talk about how he got his start in golf and the particular skills he thinks set the game apart.

PGATOUR.COM: You’ve been playing golf since you were in elementary school. What drew you to the game?

DONOVAN: I believe it was in third grade. The reason I started was I was having some problems in school with my behavior and my parents told me that if I behaved well, they would take me on some sort of outing of my choosing. And I have no idea why one of the times I said I want to golf. And they were like, okay. So, I actually went out with my mom and started golfing. So, there’s a nostalgic piece of it. And then it’s kind of come and gone as I’ve been an adult — mainly based around my schedule and if I physically felt up to it or not when I was playing. But now that I’m coaching, there’s not a ton of time, but when I can I just love the sport.

PGATOUR.COM: So how good a golfer are you?

DONOVAN: Well, when I play a decent amount, I shoot in the low 80s. But I also don’t play from the tips. I don’t drive the ball particularly well, but my iron game and short game is OK by an average person’s standards. If I had to play from the tips at PGA WEST it probably would not be a pretty outcome, but I think they’re going to give us a little bit of leeway on some of the holes.

PGATOUR.COM: Are you nervous? After all, it’s going to be televised.

DONOVAN: No, I’m not nervous. I’m excited. I hope nobody expects that I know how to golf. I just want to enjoy it. I mean, obviously it’s for a great, great cause, but more so, personally on the day, it’ll just be fun to get one, to get to play with Tony, and then just to see these guys up close and see how they hit the ball. I went to the Masters a few years ago. … Just to see the way they strike the ball and then listen to the sound is really remarkable. And you don’t realize that watching them on TV, obviously. So, when he gets to do it up close and then I just want to hear, I mean, probably the last thing Tony wants to do is talk about golf, but I just want to speak a little bit about like his process as he goes through lining up a shot and deciding how he’s going to play a certain hole and those kinds of things. I love learning, and that would be really fascinating to hear.

PGATOUR.COM: You were such an awesome soccer player — the best of all time. Is it frustrating to play a sport that you haven’t mastered yet?

DONOVAN: Yeah. I mean, that’s the beauty of all sports other than the one you played — and golf in particular. I play a lot of tennis, as well. And tennis is a sport where you can play a bad point and still win the point. You can actually play a relatively bad set or match and still win a match just based on how it’s going. In golf there’s nowhere to turn. There are no other variables. It’s just you on the ball. And that’s the daunting part because I’m so used to a sport where there are so many variables involved and so many players and referees and fans, the climate. What the beauty of golf is, you don’t have any excuses. It’s just you either did it or you didn’t. And so that’s what I love about it — but that’s also what’s very frustrating. I’m sure like everyone experiences the ability to hit a shot almost like a professional would hit, even though it’s once in a blue moon, it makes you feel like it’s a sport you can conquer. But then the reason why they are where they are is because they can do it every time or almost every time. Once in a blue moon, you can strike a ball like a professional, but you could never, ever, ever compete with them because you can’t do it twice in a row and they do it 200 times in a row over the course of a weekend.

PGATOUR.COM: What frustrates you most about the game?

DONOVAN: Honestly the level of respect I have for what they’re able to do is so high because in my opinion, tennis and golf are the two most mentally challenging sports. And I think golf is a little more than tennis because of what I just said. It’s a game and a sport that is far ahead of other sports in the way players mentally prepare. And if we could take that level of mental work and preparation and put it into other sports, athletes would be a lot better. And it’s still sort of the last plateau or I guess the last the last area to conquer in team sports because it’s seen as not macho or just toughing through it or get on with it, whereas in golf it’s like the mental side is you could say more important than the physical side.

So, we can learn so much from that sport because they have no choice, but to get on with the next shot, regardless of what happened before and in soccer you’ll see guys who make a bad play or miss a shot and it affects them for the rest of the game and they can’t recover. And in golf you just have to learn no matter what happened — good, bad, ugly, indifferent — you have to get on with the next shot. That’s the only one that matters. And I think that’s a great metaphor for life and for other sports as well could be really helpful.

PGATOUR.COM: And I also think the fact that a golf tournament is held over four days – not just a single game — makes it even more challenging mentally

DONOVAN: That’s well said. And also, what people don’t realize is when amateur golfers golf, we all golf with the cart, right? At least a push-cart or most of us have like a motorized cart. If I walk seven or eight holes, I am exhausted. I mean, exhausted. And in the sun, right? So, you don’t realize how fit they are because that’s not easy. Yes. I know someone’s carrying their bag, but you just try walking 18 holes without hitting golf shots and without the mental strength. It’s really hard. It’s exhausting. So, it makes you realize what great shape they’re at. And then by Sunday afternoon, they still have the energy – it’s really impressive.

PGATOUR.COM: This may be a weird question because soccer is so fast paced but is there anything about soccer that helps you as a golfer?

DONOVAN: It’s actually a great question. Only since I stopped playing soccer did I realize in tennis and in golf, both, the value of just watching the ball when you strike it. And I never thought about it in soccer because I was so programmed to do it without thinking and it was just second nature for me. But in both tennis and golf, when I actually just watched the ball all the way to the racket or watch the club all the way until it hits through the ball, there’s a different outcome. And it’s so difficult because human nature is always to want to see where the ball is going. You always want to know where the ball is going. And so, in soccer, when there were times where I wasn’t scoring goals or something felt off with my shooting, I would always go back to, OK, just keep your head down and watch yourself, kick the ball all the way through the ball. And that’s exactly the same thing that happens in golf. Exactly. For me, it’s almost every time I watched myself swing all the way through the ball that I hit at least a decent shot. And when I don’t, I don’t.

PGATOUR.COM: What’s the funniest thing that’s ever happened to you on the golf course?

DONOVAN: So, when I was with the under-17 national team, my coach at that time — and this was 20-plus years ago — he likes to tell this story. We were in, I think it was in Florida, and we were on a golf course and I hit a ball somewhere near the water and walked over and started lining up my shot. And without me realizing it, a gator or a crocodile had trickled his or her way up, like, really close to me. And then, my coach said, ‘Hey, Landon, you may want to check out what your surroundings are right now.’ And I looked out and needless said to say, I just left the ball. I was happy to lose a couple of dollars and get the hell out of there.