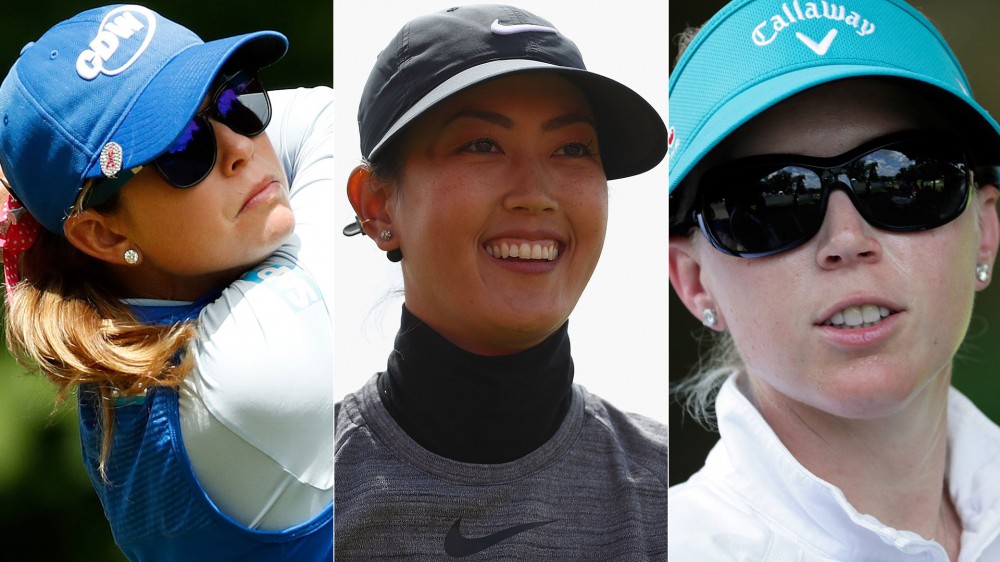 While jockeying is still possible, some scenarios are now clear cut.

The teams will be finalized on Sunday. The matches are scheduled Aug. 18-20 at Des Moines Golf and Country Club in Iowa.

For the Americans, Angela Stanford and Austin Ernst now know they will have to rely on Juli Inkster’s two captain’s picks if they’re going to make the team. They both missed the cut and can’t qualify on points or through the world rankings.

Here is the breakdown of who’s in and who’s still hoping to get in based on the current U.S. Solheim Cup points list:

The top six on the points list have secured their spots:

Though Korda is in on points, she withdrew from the Women’s British Open Thursday with a forearm injury. The severity of that injury could require a replacement, but Korda’s team said she’s rehabbing with the intent to play.

7. Michelle Wie made the cut Friday, but she could get bumped out of the top eight in points. There are seven players behind her who still have mathematical chances to pass her.

8. Lang is almost as secure as Wie, even if Lang is bumped off the points list. At No. 37 in the world, Lang would likely grab one of those two world ranking spots.

9. Brittany Lincicome currently holds the top spot on the U.S. Solheim Cup world ranking list. She’s No. 42 in the Rolex world rankings, but she made the cut at Kingsbarns and could easily bump into the top eight in points. All she needs is a T-18 or better finish to move past Lang.

10. Angela Stanford missed the cut. She needs a captain’s pick to make the team, but she is a veteran of six Solheim Cups. Though she doesn’t have a strong Solheim record (4-13-3), Stanford took down Suzann Pettersen in singles in Germany two years ago, a pivotal and symbolic triumph in the historic American comeback that will always define her Solheim Cup resume. It’s a victory that ought to continue to resonate with Inkster.

11. Austin Ernst missed the cut and requires a captain’s pick. Ernst just missed out on making the 2015 team. She has three top-10 finishes this year, but none in the last four months.

12. Lizette Salas holds the second qualifying spot on the U.S. world rankings list at No. 45 in the Rolex rankings. She made the cut at Kingsbarns and is in contention to win. She can pass Lang on the points list by finishing T-11 or better this weekend. Salas is playing solidly this summer with four finishes of T-15 or better in her last six finishes.

13. Marina Alex can make the team on points, but she needs to win the Ricoh Women’s British Open. After making the cut at Kingsbarns, she has given herself a chance. She’s No. 60 in the world rankings and has to move ahead of No. 45 Salas to have a shot through the world rankings list.

14. Mo Martin can still make the team on points, but she also needs to win Sunday. Don’t put it past her. She won the Women’s British Open three years ago and excels at links golf. She’s in contention again to win this weekend. Martin is No. 54 in the world rankings list and also needs to move ahead of No. 45 Salas to have a chance off the rankings list. Martin’s dependable ball striking has to make her a captain’s consideration.

15. Jennifer Song must win the Women’s British Open to make the team on points, but she made the cut at Kingsbarns to give herself that chance. She’s No. 76 in the world rankings.

20. Paula Creamer needs Inkster’s good favor, but she was hopeful this week that she can still get it as a captain’s pick. Creamer is one of the most successful Americans in Solheim history. Her 16.5 points are surpassed only by Inkster and Cristie Kerr. Creamer made the cut at the Women’s British Open and will be looking for a big weekend.

22. Rookie Angel Yin can’t make the team on points, but at No. 59 in the Rolex world rankings she could make it with a push into the top two on the U.S. world rankings list. She is in position to contend for the title at Kingsbarns with a big weekend.

23. Morgan Pressel is another Solheim star, a veteran of five Solheim Cup matches, but like Creamer her form has been off this year. Still, Pressel made the cut at Kingsbarns.

27. Nelly Korda can’t make the team on points or world rankings, and she missed the cut Friday at Kingsbarns, but Inkster hasn’t hidden her admiration of Korda’s skills, consistency and “fiery” makeup. She’s in the running for a captain’s pick.