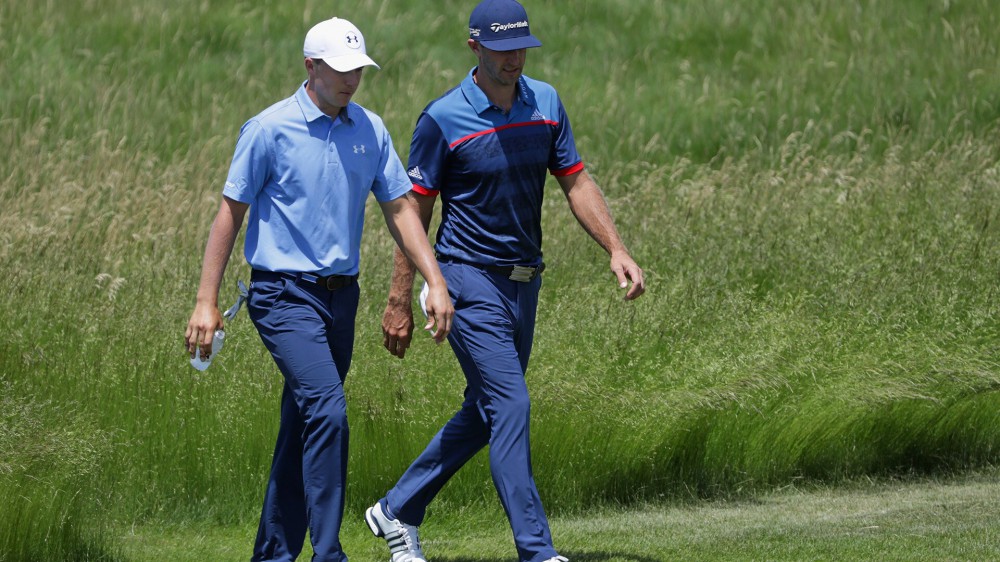 ERIN, Wis. – Amid a sea of red figures on the early U.S. Open leaderboard, it’s clear that putts are falling at Erin Hills. It just so happens that the makes were few and far between for the two players who last hoisted the trophy.

Playing together during the opening round, Jordan Spieth and Dustin Johnson were both left shaking their heads in frustration after solid tee-to-green performances that yielded only one birdie apiece.

Accuracy is usually the name of the game in this event, and Spieth passed that test with flying colors. He missed only one fairway in what he described as “the best driving round that I’ve had maybe in my life.” But his birdie on No. 11, his second hole of the day, proved his only make as he carded a 1-over 73 that left him eight shots behind Rickie Fowler.

“They were high, low, short and long. They were just all around it,” Spieth said. “By the end of the round, once you get through six or seven of those, six or seven misses, the hole starts to look smaller and smaller until you get one to go.”

Johnson’s lone birdie came on No. 15, one hole after he ballooned to a double bogey on the par-5 14th following a layup shot into some thick fescue. He was less accurate than Spieth, finding only 9 of 14 fairways and 11 of 18 greens in regulation, but still cited the putter as the chief issue during his round of 3-over 75 that made him the sixth straight defending champ to open his title defense with an over-par effort.

“I just didn’t putt very well. I missed a lot of really good opportunities,” Johnson said. “That was the big key for me. If I don’t three-putt, I shoot even. But if I just make one or two of the good looks I have, it’s a couple under. I didn’t hit it great, but I hit it good enough to shoot a good score.”

Spieth joked after the round that he and Johnson may hold a “pillow fight putting contest” on the practice green to see if they can spark a turnaround after combining for 65 putts. But the fact remains that there is work to be done simply to make it past the 36-hole cut that will trim the field to top 60 and ties, let alone catch up to Fowler and the other leaders.

“I’m going to need something 3, 4 under just to get back in the tournament tomorrow,” Spieth said. “I know that. It doesn’t change the way I approach the course. Ideally I play the exact same, I just get those (putts) to go.”