CROMWELL, Conn. – After finding nothing but positives for his first five trips around the course, Jordan Spieth finally suffered a setback at TPC River Highlands.

Spieth won the Travelers Championship last year in his tournament debut, and he quickly bounced back from a missed cut at Shinnecock Hills by firing a 7-under 63 in the opening round this week to take a share of the lead. Out early during the second round with a chance to move even further into red figures amid calm conditions, he instead went the other way.

Undone by a triple bogey on the par-5 13th hole, Spieth was 5 over for his first 14 holes and needed an eagle on the par-5 sixth hole for the second straight day simply to salvage a 3-over 73. The score knocked him back to 4 under for the week and six shots behind Brian Harman.

Despite finding three fewer fairways, three fewer greens in regulation and taking five more putts than he did in the opening round, Spieth still put a positive spin on a lackluster result.

“I actually felt like I had better control of my golf swing than I did yesterday. I really struggled with my swing yesterday and I kind of got some good breaks,” Spieth said. “It’s just golf. It’s kind of like yesterday I got three or four shots extra out of the round, and today I lost three or four based on how I felt.”

Spieth was happy with his opening-round effort, but even after finishing late in the day he still went straight to the driving range that lines the ninth fairway at TPC River Highlands – not exactly standard behavior after grabbing a share of the lead.

“So it’s not like things are on,” he said. “Sometimes it can get disguised by rounds, but it’s not far off. It really is close.”

Spieth has lamented a lack of quality chances to win this year, which he has previously described as being within six shots of the lead heading into the final round. He’ll have some work to do to meet that mark this weekend in defense of his title, as his round hit a snag on No. 13, his fourth hole of the morning, when he pulled his tee shot out of bounds and then hit his subsequent approach into the water.

“For whatever reason, it’s a large fairway but it’s always just killed me,” Spieth said. “I don’t know what it is about the hole, but that hole I get on the tee and for whatever reason I struggle. … I just hit a bad shot at the wrong time there.” 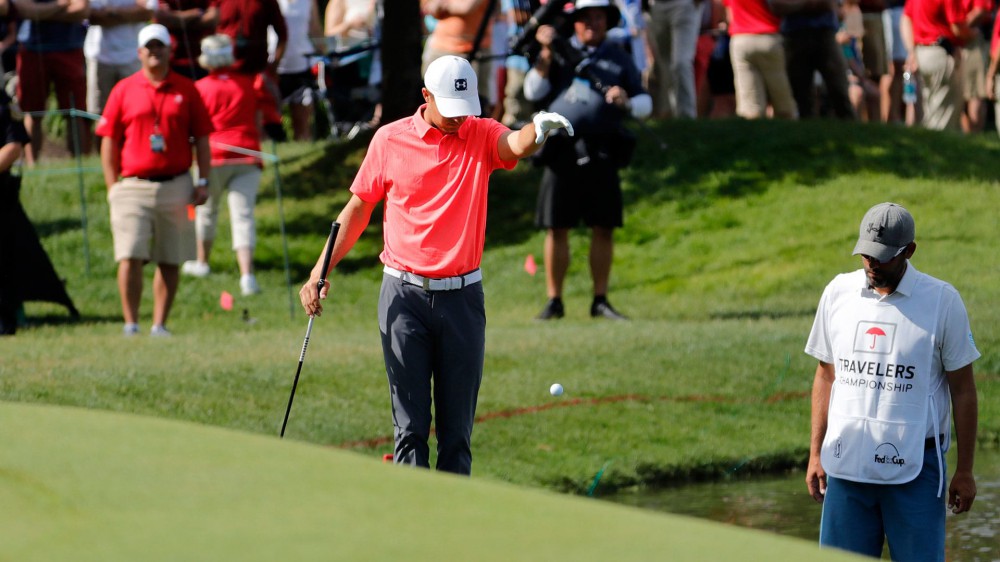 Williams splitting with Scott, caddying on LPGA in N.Z.