In a shocking conclusion to the Evian Championship, Angela Stanford won when Amy Olson double-bogeyed the final hole on Sunday in France. Here’s what happened in the LPGA’s final major of the year:

What it means: Stanford, 40, won her first major 15 years after losing a three-way playoff in the 2003 U.S. Women’s Open against eventual winner Hilary Lunke and Kelly Robbins. It was the Texan’s sixth LPGA win and first since 2012.

Round of the day: Going strictly by the numbers, Lizette Salas had the day’s low round, a 6-under 65, but Sunday was about trophies, so we’ll examine Stanford’s 3-under 68. She was in the mix most of the day, and rose to the top of the leaderboard with an eagle-3 on the par-5 15th hole. But she immediately gave those strokes back by taking a disastrous double bogey on the par-3 16th. She gamely rolled in a birdie putt at the 17th to cut Olson’s lead to one, and narrowly missed another birdie on 18. At that point she appeared finished, as Olson needed only a par on 18 to win.

Biggest disappointment: Had to be Olson, who was seeking her first LPGA win. She was playing steady if not spectacular golf and had missed only one fairway when she came to the par-4 18th. She then proceeded to hook her drive into trouble on the left. Her attempt to escape remained in the rough and by the time she put her third shot on the green, it was well short of the hole. She then gunned her first putt some 5 feet past, then missed the comebacker. Her 74 left her in a four-way tie for second place.

Shot of the day: Stanford’s approach to the par-5 15th hole that set up her 7-foot eagle putt.

Quote of the day: “I know me very well, and I do a bunch of stupid stuff. But deep down I’m a fighter. I’m a grinder.” – a tearful Stanford to Golf Channel’s Tom Abbott 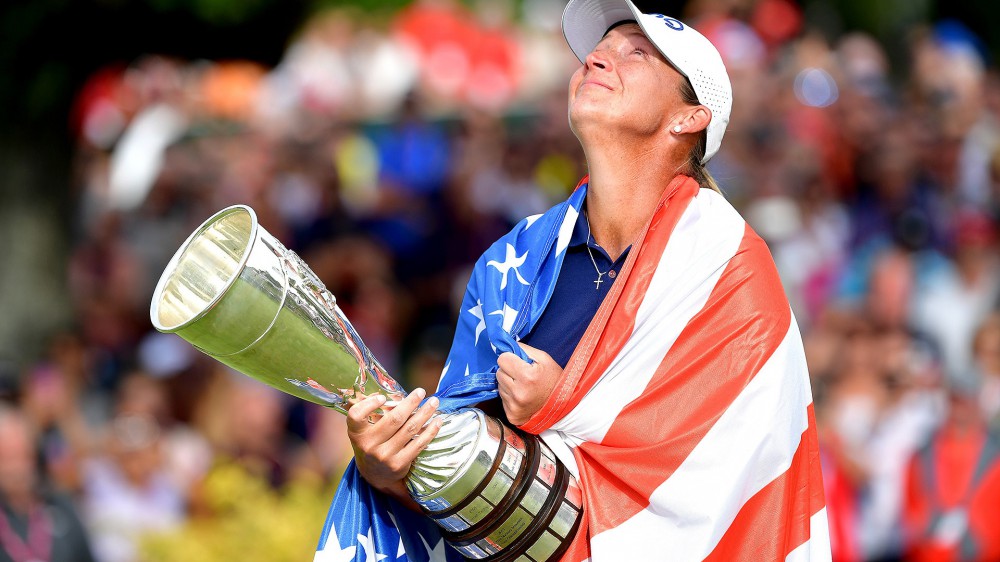