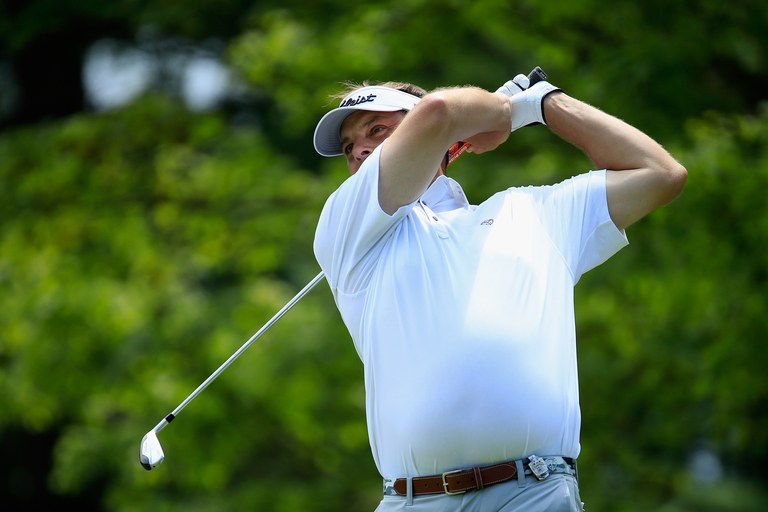 The PGA Championship is unique in that it awards a handful of spots in the field to accomplished club professionals—teachers who thrive in regional and national competitions. In years past, prominent club pros like Claude Harmon (Butch's father) were consistently competitive, but in recent years, tour players have dominated the leader boards.

But for a half-hour on Thursday, Long Island club pro Matt Dobyns turned that fact on its head. The 40-year-old head professional at Fresh Meadow Country Club birdied his first three holes to jump onto the first page of the leader board—a familiar place for him at national club professional events. The long-hitting Dobyns is a two-time winner of the National PGA Professional Championship, and he has finished in the top ten of that event—which is the club pro qualifying event for the PGA Championship—four times in seven starts.

Sign up for the Golf Digest Schools series, "Power Secrets of the Pros" to get more distance off the tee"

At 5-foot-10 and 210 pounds, Dobyns isn't the prototypical masher, which means examining his swing could well be a more valuable exercise for the weekend player than trying to copy Dustin Johnson or Brooks Koepka. "There's never been a bigger disconnect from the players on tour and the average weekend player," says Golf Digest 50 Best Teacher Mike Jacobs, who teaches down the road from Dobyns at Rock Hill Golf & Country Club in Manorville. "At the PGA, it's interesting because you can see your local pro compete with the stars on the tour. Matt Dobyns is a great one to watch because he really gets the most out of his swing in ways anybody can copy."

Most weekend players try to gain distance by making their hands go faster, which is actually a recipe for slower clubhead speed, says Jacobs. "I have a studio where I can do a full biomechanical analysis of a player's swing, and Matt has been in there to get measured," says Jacobs." The average player winds up so much to try to produce speed, and then throws everything into the downswing. A lot of amateurs actually have more hand speed than a tour player does at impact."

The difference? The wrists only produce about 0.5 horsepower. A weekend player can generate 2 horsepower overall, while a tour player produces 5. "For the best players, the wrists are a conduit for the speed the body produces, not the main power generator," says Jacobs. "One thing Matt does really well—along with the big hitters on the tour—is get the speed out to the end of the club."

For you, it means you should stop trying to create lag and worry more about releasing the club sooner in the downswing. "You need to release way earlier than you think, and way earlier than you would with your irons," says Jacobs. "There's a reason tour players look so effortless when they bomb it. It's because they really are getting more out of less. Efficiency is so much more useful than raw effort."